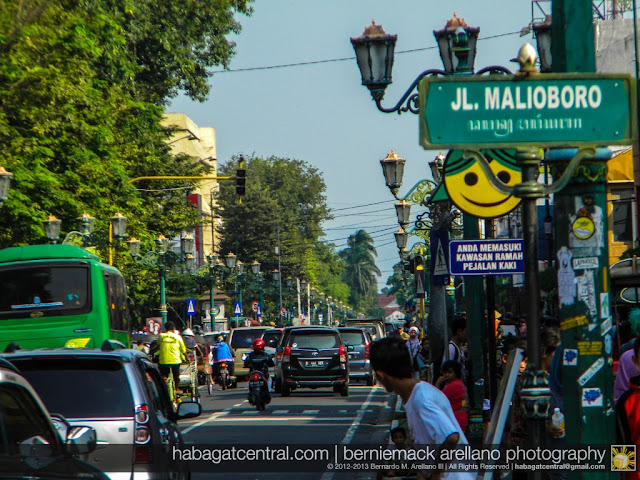 Given Yogyakarta’s stature as one of the cultural centers of Java, the best souvenir that anyone can get here perhaps would be batik clothes! Prices of batik clothing in Jakarta is expensive, but down here in Jogja, you can get the best batik bargain–enter Jalan Malioboro!

Jalan Malioboro is located at the very center of the city. Malioboro IS downtown since it connects the train station, Tugu Jogja, the Governor’s Palace, banks, comnercial establishments to the very core of Jogja culture, the Kraton (Sultan’s Palace).


Along the road are rows of ‘batik shops’ that sells shirts, polos, dusters, skirts, shoals, headgear–just about anything that batik touches–more than a kilometer of it! It’s just like a Divisoria of batik fashion!


And like I said earlier, batik clothes here are pretty darn affordable than it is in Indonesia’s capital. I got my batik polo shirt for a bargain IDR19,000 only (that’s only PhP75 in Pinas!)–and this is in one of those “posh batik shops” in Malioboro. You can get a duster for your mom, a shirt for your dad and bro or friends in bargain prices.


It is also advantageous to learn a bit of Bahasa or Javanese (I prefer the former since it is easier than the latter) when dealing with the vendors, especially when you look like them. Filipinos and Indonesians look almost the same, and the vendors may start a conversation with you in Bahasa (maybe they assumed we were locals or Malaysians) until we spoke in English. Maaf. Aku tidak mengerti Bahasa.

Here are some tips how to haggle in the batik shops of Malioboro:

And although it is the old downtown, I find Jalan Malioboro less chaotic and clean. Be wary of your valuables though.


We only had a very short time in shopping at Malioboro. I haven’t been to other batik shops so far, especially their market near the White Fortress and the Kraton. An experience in Yogyakarta is never complete without shopping for souvenirs, or even mingle with the locals themselves.

This was originally posted on HabagatCentral.com on August 2013.
Labels: Asia Indonesia shopping travel Yogyakarta
Where is it: Yogyakarta, Yogyakarta City, Special Region of Yogyakarta, Indonesia