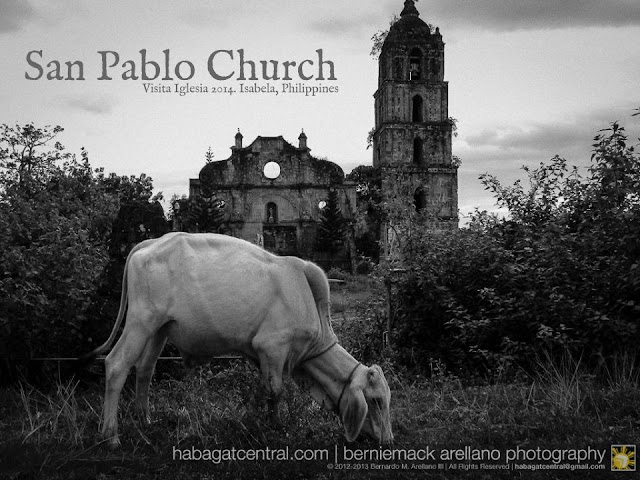 Perhaps it was the last church we have visited that cool Friday afternoon in Isabela Province of the north, but is one of the most profound. In the town of San Pablo (de Cabagan) lies an old Spanish colonial era church in semi-ruined state.


First built in early 17th century, San Pablo Church is said to be Isabela’s oldest, if not the oldest in the entire Cagayan Valley. The town itself was one of the earliest settlements during the Spanish colonial era in the valley, then called Cabagan Viejo. The current stone church, unique in the province (or perhaps the entire Valley) for the only one built in adobe instead of the prevailing red bricks, was built in 1700s under the Dominican friars.


It barely survived World War II as it was said to have been burned or bombed, leaving it in ruins.
Today, San Pablo is a small, and laidback town–quite the opposite of the towns we’ve passed through in Isabela. In the middle of the tranquil poblacion, the church tower dominated San Pablo. It was tall yet a bit slender! Six segments tall that seemingly dwarfs the size of the facade, in glorious baroque style.


The Church Plaza was unkempt, overgrown by grass, and kept as a pasture land for the cows that graze inside the ancient church walls.


When we came inside, although ruined, about ⅓ of the original church was renovated and still used by the faithful San Pablenyos. The rest was converted into a garden with ruined naves, bricks, arches, and windows–seemingly ghostly like that of ancient Pompeii, with the belfry tower dominating us.
The elements may have tried to tear this down, but it won’t fall. Standing as a witness of the Valley’s history and evolving culture, San Pablo Church ruins is a must see for tourists and travelers visiting the Queen Province of the Valley.

This article was originally posted on April 13, 2014 at HabagatCentral.com


How to get there:

San Pablo is the northernmost town in “mainland Isabela,” and it’s neighbor 30 minutes up north is Tuguegarao City in Cagayan.