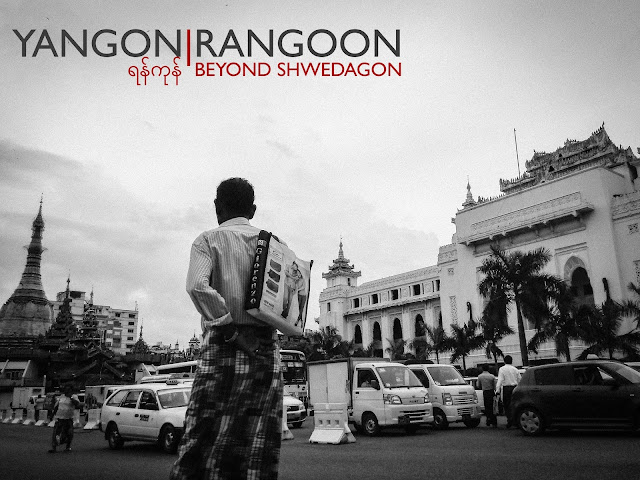 For most tourists, travelers, and visitors, Myanmar's image is that of ancient temples, monks, and images of Aung San Suu Kyi. I couldn't blame them. The country just recently opened itself up to the world after the military administration gave way for democracy. However in Yangon, the former capital, has a different story to tell, and like any developing nation, a struggle to keep its cultural heritage intact.


Yangon or Rangoon as it is known in its colonial title was the capital city of British Burma, then the independent Burma. Six million people live here, and despite the administration moving out the capital to Naypyidaw on 2006, the city still is dominant in Myanmar's financial centre. Because of its importance as a river port to the British and the Burmese, the city became prominent during the colonial era.

Shwedagon Pagoda is by far the most famous landmark of the city, dominating the skyline with its golden spire that pierces through the sky and surrounded by stately parks. Locals and tourists alike flock the temple in droves every day and every night. It’s a must see and a must experience for all. However, Yangon also has another cultural treasure in its sleeve – the downtown itself.

It is said that among all of the former British realms in Asia, Yangon has one of the largest number of well-preserved colonial-era buildings. It literally dominates the old downtown’s streetscape and architecture! While Bagan prides itself with the ancient brick pagodas that are scattered all over the semi-arid plains, Yangon on the other hand delivers with these stately buildings mostly built during the British rule in Burma.

Nowadays, one can appreciate the old world charm this city has to offer, by walking in the downtown area itself, starting with the city plaza itself, or Maha Bandoola Park. The syncretic neo-colonial and Burmese vernacular City Hall looms on its north side while the red-bricked High Court is flanked east of the park.

Not far from it is Sule Pagoda. Roads in downtown Yangon radiate from this point, as if it imposes itself as the Kilometer 0 of the city.

Pansodan, Merchant, Strand, and Sule Roads boast of stately government and commercial establishments, mostly exhibiting neo-classical and art-deco designs with that has that distinct British and Burmese feel on it.

The Secretariat Building, a majestic and sprawling red-bricked building, lies abandoned after the government officials moved inland. It was the administrative and ministerial centre of both British Burma and the independent Myanmar until 2006. The overcast sky and it being abandoned felt like Harry Potter’s going to appear somewhere.

A number of colonial-era buildings were influenced by British Indian architecture that emphasizes ventilation, bigger windows, domes, and all those stuff architects know, (I'm not an architect) since India was just a stones throw away from Burma.

That steamy yet overcast afternoon, I leisurely walked in the downtown with such appreciation on how the entire streetscape has been preserved. Took some pictures as if there is no tomorrow. I even experienced going into one of these buildings, particularly the Postal Office, to send my post cards to my friends back in Manila.

There is this old world charm and aura that seemed reminiscent of the British Raj in India. It felt like in some film noir or Indiana Jones movie.

That steamy afternoon leisurely walk was interrupted with thunder and lightning over the horizon. I forgot that it’s monsoon season here. Then the rain poured ferociously. I skipped from one building into another, until I reached the end of Pansodan Road where the Yangon Heritage Trust office was located where I took shelter and waited for my friend Thet. Good thing I was wearing my longyi back then.


The office is located in one of those heritage buildings in Pansodan—living up to its name. We had a very short chat with each other, as she is still on a break in an office hour. While it was raining hard, she then gave me a perspective of what’s going on in Yangon.

Because of the recent opening of the country, there is a real estate boom in the city, evident with so much construction areas and T-cranes that littered Yangon’s skyline. Some of the old, colonial buildings were left to rot. While several organizations have made documentations and moves in saving these architectural, cultural, and historical gems, the pace of rapid urban development may threaten these buildings for demolition to make way for newer infrastructure.

Yangon was not spared by the atrocities of World War II. It was also bombarded, but much of the buildings were left standing. Aside from it, the closure of the country by the military junta may have stalled development in the city, lessening the threat of demolishing these buildings in favour of new and modern skyscrapers that now dominate most of the Asian cities nowadays. It may have run parallel to the story of Iloilo in the Philippines too.

The rain has stopped, but it was still drizzling. The twilight was fast approaching. I only have a few minutes of daylight to spare to see the rest of the downtown. I bade my friend goodbye and thank her for giving me a more in-depth look of its struggle.

As the sun sets over the harbour, I still took some shots of the rush hour dusk of men straddling with their longyis and women under their umbrellas. The city starts to light up amid the wet pavement. I felt bitin—haven’t explored that much of the city yet. I haven’t been to the railroad station, that barbeque stand near Little India or Chinatown, I think. I haven’t experienced that railroad that goes around the city, and at that time I wasn’t even able to see Shwedagon yet.


My time in this city was limited. Appreciating the downtown wasn’t enough. Looking beyond where the tourists are gave me a glimpse of Myanmar looking forward, while anchored on its rich cultural heritage. The struggle has just started, but personally, I have high hopes for the Yangonese people. Looks like I have a reason to come back here again soon.
Labels: Asia Culture and Heritage Myanmar
Where is it: Pansodan Street, Yangon, Myanmar (Burma)