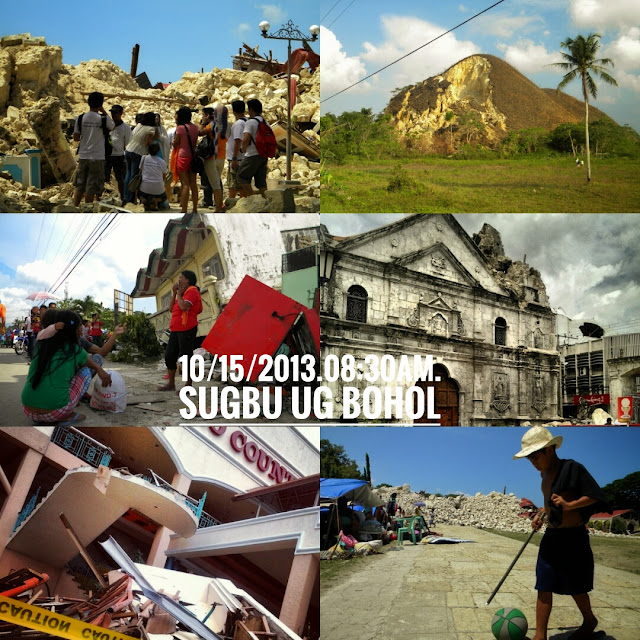 It was the 15th of October, 2013, 8 AM in Banilad, Cebu City. Just as I was about to dress up, a mild tremor shook my apartment. For being so used in mild earthquakes in Mindanao, I ignored it. Then suddenly, the earth shook violently. Only wearing a wrapped towel, I immediately ran to open grounds near my pad. The earth shook violently that my neighbors were crying to stop. The electricity was shut down. The walls were pounding like it’s going to collapse.

It was more or less a minute or two of violent shaking. Quickly as it came in, it faded away, with some aftershocks.


The internet was on. News from social media was pouring on that wild tremor that was felt all the way to Mindanao. Cebu, Bacolod, Iloilo, Leyte, Cotabato, Cagayan de Oro…we have no idea where was it coming until USGS initially registered—magnitude 7.1 (7.2 on PHIVOLCS), Del Carmen in Bohol (which later would turn out, it’ll be in Sagbayan). We were shocked—the epicentre was that close to Cebu!


I called the office and my manager said that all people were evacuated. The curious I didn’t stop me from walking towards the office. I like to see what happened after that great tremor. So I head of.

Weird, it was a national holiday. Banilad Road shouldn’t have that much traffic—but it had. As I approached Gaisano Country Mall, people were rattled and went outside. There was scattered glass debris from the street lamps. Then the first sight of destruction came in. A portion of the mall’s staircase fell on the ground. People were abuzz. Media was already there. After I took a photo of it, I went on to IT Park.

Reaching one of Cebu’s main business centres, people were going home at that time. The organised evacuation within the district has left thousands of call center agents, BPO employees and office workers out of the building—Sinulog na ba? The scene was like a big picnic ground but rather with a tense twist. The earth was still shaking at that time when I was there.


Looking for my officemates, I immediately dismissed that we won’t be having any work for that day. The guards won’t let us in.


That morning, I told myself that I won’t be going back to my pad since there’s no electricity. I checked my tab, good thing the internet was working, and saw photos posted on social media—the Basilica Minore del Santo Nino’s belfry was destroyed, a building in the southern portion of the city collapsed, Cebu Doc University’s building was damaged, and people in different hospitals were immediately evacuated outside, and reports of deaths in Pasil and Mandaue is streaming in.

Then we realized that 10-15-2013 wasn’t just an ordinary day. We experienced an event that would forever be etched in the psyche of the Visayan history and culture–the day SugBohol (Cebu and Bohol) was shaken.

The sight of the Basilica’s damage just brought me almost to tears…and so I said—I’ll go downtown! Ronda! Ronda like how a journalist does! The start of my Cebu City ronda, post-earthquake ocular of the city.


And I guess, the rest of the photos would be enough for us to see how the country's second largest metropolis came to a halt and menacingly jolted by aftershocks for days on. Thank goodness though Cebu didn't took brunt. However, the thoughts on our Bol-anon brethren lingered.