Putrajaya: Spaces of Power and Governance in Malaysia 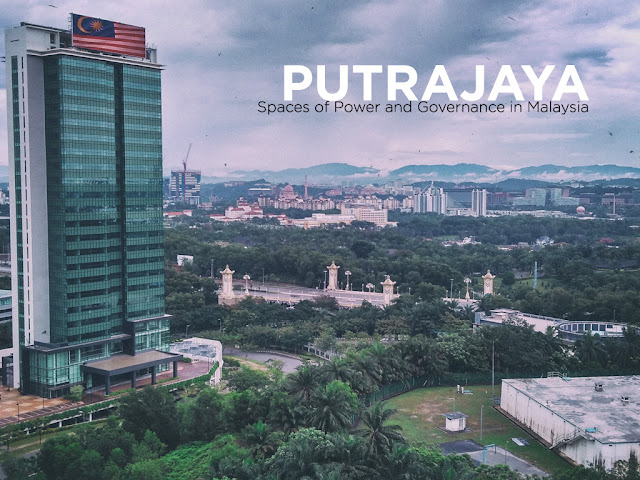 It was our first time going around in Malaysia and we were able to get an introductory glimpse of this nation—its culture, heritage, local life, and yeah the cities. Although we focused on Kuala Lumpur, the capital of the country, for our short vacation, we were able to go around the Peninsula a bit—one of which was visiting the new city of Putrajaya, the centre of federal administration.


The Federal Territory of Putrajaya is located around more or less 25-30 kilometres south of Kuala Lumpur, almost halfway to its new airport. It’s only about thirty minute-drive through the network of good highways, and more or less the same through KLIA Transit, the fast train connecting it, KL, and the airport. For Malaysian standards, it’s already quite outside and far from the city centre. For suburban folks like us, it’s just a normal distance.

Though it was named after the country’s first Prime Minister Tunku Abdul Rahman Putra, it also had a Sanskrit origin as well referring to “Putra” as “prince” and “jaya” means “success” or victory—therefore it may sound like a “Princely Victory” perhaps?


The city was said to have been envisioned by the Malaysian Government as to replace Kuala Lumpur as the seat of administration of the country due to overcrowding back in the 1990s. It was once a vast plantation of palm oil and formerly called Prang Besar. It used to be part of the state of Selangor.

Development started in the mid-1990s when the federal government bought the sprawling lot from the State of Selangor. The construction was somehow hampered by the Asian Financial Crisis that hit the region in 1997-1998. By late 1990s to early 2000s, the federal government offices were moving gradually to the city—including the Prime Minister’s Office.

By the time we were there, most of its major landmarks have been finished and a great majority of the federal offices are located there. Only a few remain in KL.

Putrajaya’s main attraction is its urban landscape, with emphasis on green spaces, and the state buildings—which lies mostly in Precincts 1,2, and 3—the core districts.

Like the capital cities envisioned in other countries, Putrajaya isn’t spared with its projection of power, majesty, and dominance in architectural and spatial sense. The wide Persiaran Perdana, the city core’s main avenue, is lined with important government buildings dominated by modernist design with aspects of Middle Eastern accents that pays homage to the dominant religion of the country, Islam.

Masjids are also an integral part of the cityscape such as the pinkish Putra Mosque and the steel and glass marvel Masjid Tuanku Mizan Zainal Abidin.

The mix of these designs gives an impression of a forward-looking country in touch with its heritage.
At the end of Persiaran Perdana is the green-domed and dominant Putra Perdana, the Prime Minister’s Office.

The core districts sit along the tranquil waters of Putrajaya Lake.

Despite the city being the centre of federal administration, Malaysia’s Parliament, the Palace of the Yang di Pertuan Agong (Malaysia’s head of state and royalty), and the financial district of the country are still in KL.

Majority of the residents of this city are government workers and officials, mostly encouraged to move here to populate the city, made ideally for 300,000 inhabitants. As of 2015, it just surpassed 50,000.

Though housing condominiums and apartments dominate the residential spaces of the city, the bungalow houses, like those of subdivisions and gated villages here in the Philippines, are present. However, unlike here and even in KL, these houses don’t have fences or gates. The houses’ lots are open and can be seen from the public areas. A friend of mine mentioned that fences or gates tend to make barriers out of the community spirit of the place; hence the government discourages the construction of such.

Real estate here is a bit expensive, but the government is encouraging people, especially those who are working with the federal offices, to resettle through loans and other ways. Commercial and recreational spaces were constructed to somehow complete the live-work conditions for the city.

Still, there’s a lot of space still in Putrajaya.

Getting here and around is quite a challenge for an average commuter. Putrajaya’s mass public transportation looks like it is still at its young stage. Though it is connected through the fast KLIA Transit to both KL and KLIA, buses here seemed to be few.

The Putrajaya monorel (monorail) was postponed because there aren’t much people around here yet.
Wide avenues and highways crisscross the city, which gives an impression on emphasis to vehicular traffic than public transportation.

The best way to get around is to take the tour bus (bas persiaran) at Putrajaya Sentral Station, or just grab a teksi, Grab, or Uber.

Putrajaya, like other planned capital cities such as Washington DC, Brasilia, and Canberra, is an example of how the state projects its influence and power through spaces and architecture. These are often depicted in grand scale, majestic sizes, and designs that reflect the culture and the vision of the government—the bigger, the better, the more powerful and influential.

This isn’t a new trend. Different civilizations have created great monuments in their urban centres and foci of power. The Pyramids of Giza, the Coloseo Romano, the Parthenon, the Great Wall, Taj Mahal, the Vatican—these often have spaces and architecture that utilizes its grandiosity with power and influence.

Wilayah Persekutuan Putrajaya may not be Malaysia’s capital officially, but the city’s landscape is its own heritage, brand, and its place under the Malayan sky.

We hope that we have more time to explore the city next time.

This is the first of the series of blog posts on our recent Malaysian Peninsula trip, more to come soon.
Labels: architecture Asia Geography Malaysia travel urban planning
Where is it: Putrajaya, Malaysia