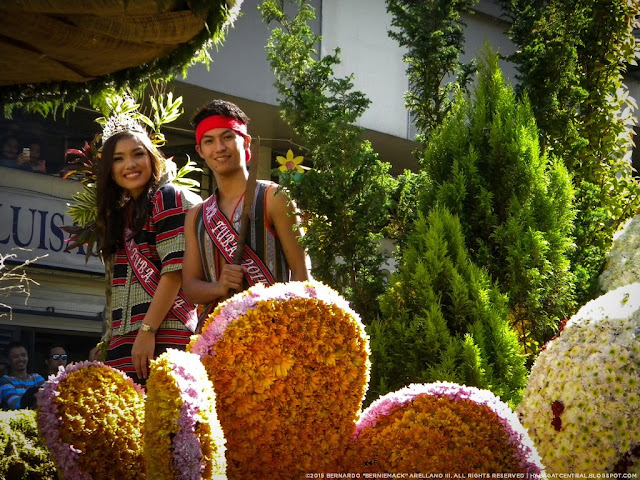 Little Otek and his family woke up very early and went downtown that cool February day. The sun hasn’t risen yet at the pine-covered hills of the hill station in the Cordilleras. Though sleepy, he was excited to head downtown.

The jeepney halted near the bus station; from there they have to walk together with thousands of people meeting up in the downtown, just like the old dap-ay of the olden days.

Thousands of people line up the main road of the hill station called Session Road. They sat at the street gutter and waited patiently until the sun shone and warmed up the morning a bit.

It is time of the year again when Otek and thousands of tourists converge in the hill city of the Cordilleras of Baguio, when thousands of flowers, colours, and the beat of drum, lyre, and gangsa fill the air. It’s Panagbenga season once again.

A Birth of a Baguio Tradition


Perhaps one of the most highly anticipated major festivals in the country is Baguio City’s Panagbenga Festival. Held annually every February, it is the time when thousands of tourists climb up to the “Summer Capital of the Philippines” to witness a parade of blooming flowers, creativity, and Cordilleran culture. Twenty years since its inception, the revelry has evolved from a simple festivity to one of the city’s largest crowd drawer.

It is said that like Bacolod’s MassKara Festival, Panagbenga’s roots were rooted both tragedy and celebrating nature, life, and culture. It was only a few years after the great quake that killed many locals and devastated its economy and infrastructure. The local business sector would like to perk up Baguio’s tourism economy once again, celebrate life, and somehow commemorate those who have departed with a bloom of flowers in this city.

In 1995, the Baguio’s local business and political leaders brought the idea of Baguio having its own flower festival. The festivity focuses on the Cordilleran traditions, beliefs, and even its natural resources.

That’s why there are flower floats, flower decorations, and flower-inspired parade, she added.

The family watched the parade as floats pass by Session Road. Photographers were abuzz with taking the best angles. The marshals were guarding. The people raised their hands together with their smartphones, iPhones, digital cameras, or tablets as if they were giving praise to the flower floats and the contingents.

More so, when a familiar celebrity is alight one of the floats, the scream of people in the downtown is like a wave of excitement and anticipation cascading downhill. Some would even joke, “may artista jan!” and people started screaming with glee.

As the parade continues, this familiar beat keeps on playing on every drum, bugle, and lyre contingents the whole month.

In fact, hearing it played on the radio meant its Panagbenga season once again, just like the “Syagit of Kusog” of the Cebuanos.

Though it sounds modern, the late Professor Macario Fronda of Saint Louis University composed the Panagbenga theme, which driven its inspiration from the Bendian dance, an Ibaloi dance ritual of celebration of unity—which emphasizes the unity of the people of Baguio and the Cordilleran peoples.

Heres a video of a Bendian dance in Benguet

By noontime, the parade was over. While some headed to the Academic Oval to watch, others went to shop at Burnham Park for some souvenirs. Session Road and the narrow roads of Baguio were so full of people, that it feels like the lowland temperatures have been reached.

In fact, Panagbenga’s crowd is said to be notorious for being so jampacked, city-wide vehicular traffic, and pickpockets—like any other festivities in the world. These didn’t hinder Otek’s family to witness and experience the annual revelry.

As for Baguio, hope blooms.
Labels: Asia Baguio Cordillera Culture and Heritage Festival Philippines
Where is it: Baguio, Benguet, Philippines