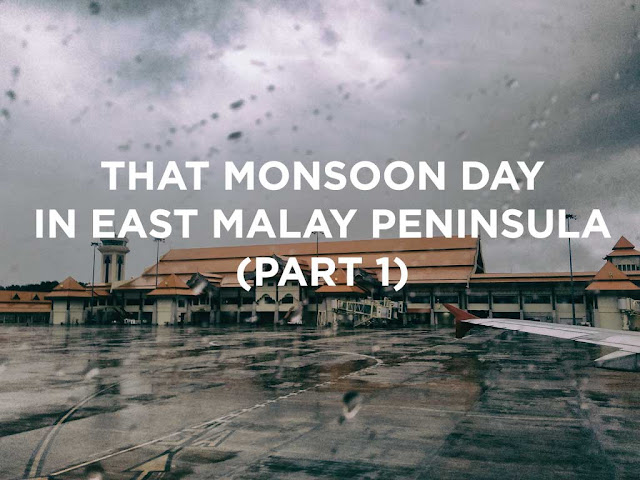 When going to Malaysia, it's always about KL, Penang, Melaka, and mostly the Western part of the Peninsula. Couldn't blame them. Much of the urban development was focused on this side. However, going to the eastern coast of the peninsula is for those who like to go deep into Malaysian life and culture. Thankfully, we got a great friend of mine who is working there. Great! I'm excited to see, at least for a day, the states of Terrenganu and Kelantan.

It was late in November, the monsoon has just started.


Got late, almost missed my flight

We got complacent that Saturday night. Staying in Cyberjaya and having checked-in on the web, we told ourselves maybe we should get a bit late before our flight. 4:45AM for my 6AM flight to Kota Bharu in Kelantan.


We woke up, went to the airport, and found out that our flight to KB was already leaving. Eff! We couldn't get in! Though we felt a bit distraught, we still have one option--our unused ticket to Kuala Terrenganu, a three hour drive south of KB!

We rushed to the check-in counter and just in time for the last call for passengers for KT! Still partly nervous because of my luggage. I didn't purchased a check-in luggage option! Good thing though, the check-in counter cleared it for carry-on. Before I knew it, I was aboard AirAsia Airbus A320 flight bound for KT!

The sun was rising amid the overcast sky. As we took off, the splendid view of Putrajaya lie asleep, while the twin pinnacles of Petronas Towers beckons an awakening Kuala Lumpur.

Our flight took us about an hour to reach KT amid the increasingly gloomy atmosphere. It was tsamba that we met a Filipino flight attendant in the flight. Suddenly, it wasn't like in a foreign area.

So this is Amihan in Malaysia

We are about to land at Sultan Mahmud International Airport after an hour journey from KL. The skies look very sinister. Dark grey clouds lingered menacingly in the eastern coast. Both of my friends warned me about the monsoon season in Pantai Timur, or east coast of the peninsula, during November to at least March--the same season of my favourite amihan.

As we disembarked off the plane, the rain started to pour. We looked for a cheap ride to the bus terminal for Kota Bharu. However, when you're in KT, the only option for you is to take the taxi for RM30 (that's around PHP300) for a supposedly 30 minute ride to downtown, where the bus terminal is located.

By the time that we left and airport and started our journey downtown, the rain was furious! We never knew that amihan could be this furious in east coast! We remember that back sometime a few years ago, the three eastern states of Terengganu, Pahang, and Kelantan went under water. The thought that we might get stranded because of flood came in our minds.

It was raining hard. We couldn't see the Masjid Kristal, the city's famed landmark, or even the downtown. The visibility was so poor, the cab driver was very cautious on his driving. By the time we arrived at the bus terminal, the rain doesn't seem to stop. Hujan lebih?

Amihan isn't furious in the Philippines, even on east coast. Never knew she would act like habagat in Malaysia. Actually, amihan season here in east coast felt like I was transported back to habagat season back home--you wouldn't see the sun for days amid the furious rain.


The Bus Terminal at KT

Kota Bharu is a three to four hour drive north of Kuala Terengganu. Though both are major cities, they only have scheduled trips in between them, unlike those in the Philippines that leave 30 minutes to an hour. We arrived at around 8:30AM. The next bus ride to KB was...10AM!

We purchased a ticket worth around more or less RM10. Pretty affordable for something so far (don't get us into petrol prices here in MY). After that, let's wait for the bus to arrive.

The terminal sits right at the heart of downtown KT. If it wasn't for the rain, we could have gone to Kampung Cina or around downtown. However, there was an ankle deep flood just in front of the bus terminal! Never mind, we'll stay.

We had our breakfast. Satu nasi lemak dengan ikan bilis dan teh tarik please! (One nasi lemak with anchovies and hot steeped tea please. Need to practice more of my Bahasa Melayu). The good lady brought us a handful. It only cost around RM3! T'kasih we said to the lady. She smiled back and went back to her work.

As we eat and took a sip of hot tea, thunder and lightning pound the city. The rain wasn't stopping, it was getting stronger as time goes by. We looked on the AccuWeather app and checked the satellite imagery for the area. Dang! The clouds were getting enormous! Somebody! Mag-alay kay Santa Clara ng itlog nang matigil ang ulan!

Before we knew it, the bus arrived--on time!

Too bad, because it was raining and we were saving our battery for our journey to KB.