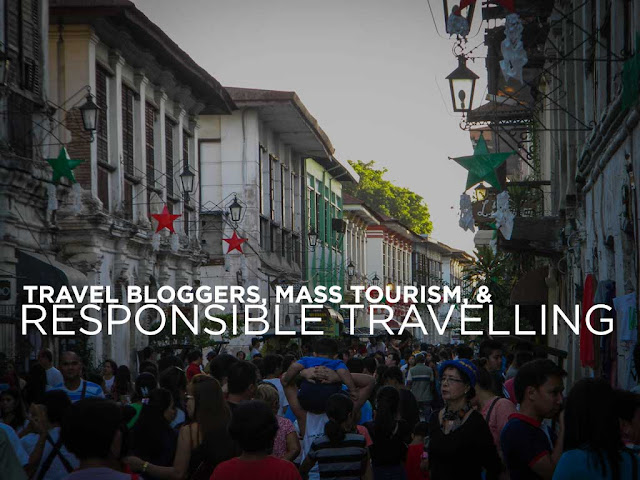 A previously unknown destination is posted on social media by bloggers, Instagramers (or Igers), and the like. It was beautiful, virginal, and untapped by tourism. Finally, an alternative from the usual tourist destinations that have been “common” on social media feed of friends and family. Para maiba nga naman.

It went viral and became the new “trendy place to be.” Tourists started flocking in—at first by the trickle, then a dozen, then by the multitude. A few months later, it has become an emerging destination—with crowds trampling plants, garbage everywhere, and a crowd that looks more like Divisoria than it is supposed to be.

The previously emerging destination was ravaged by mass tourism, and for some, they blame the bloggers and digital influencers for the ruckus.
.
We’ve read some of the laments of the travel bloggers a few days ago. Some of them blame themselves from the ruckus; the others think it is a shared responsibility. Some felt guilty and discouraged.

For years, it has been one of the greatest dilemmas in the travel blogging community—should we post it, share it, or should we just keep it with ourselves? The bigger question though, is the community ready as well?

In this day and age, anything posted on social media and the internet can spread like a wildfire in just a matter of hours. It can sway public opinion in just a blink of an eye. Humanity’s quest is insatiable. The usual travel destinations are already crowded, expensive, and downright gasgas or cliché. Kumbaga, we’re looking for better destinations from the usual.

Travel bloggers in general share their experiences through writing, video blogging (or vlogging), sharing photos and videos on social media, and more. Most of them would just like to document their experience or promote the place as a way to help the people of the community, a place, or a nation.

They give their own reviews to help other travellers and tourists check whether it’s all worth it, or what customs should they consider. Generally, they help people get a glimpse of the place.
Their audiences are wide ranging—from the adventurous to the leisurely, to those who are culture aficionados and to first timers. Indeed, their influence is acknowledged all throughout, especially in the tourism sector.

The wildfire starts from a blog or social media post, and shared multiple times. It does remind me on how Visayan migrants got their encouragement and information from their relatives in Mindanao, through chain messages.

In one way or another, travel bloggers promote the place. Their photos, videos, and their accounts become a medium of marketing a place. Their description and their experiences make the place seemingly reachable and can be digested more—as it is an account of usually ordinary people who enjoys travelling. It intrigues and encourages their audiences to go to that place and experience it for themselves.

Their experiences make up the place—a process geographers often call it “place making,” It is a process of shared experiences in a place. For local government units, communities, entrepreneurs, and even the national government, that may mean “tourism promotion and marketing.”

The communities acknowledge the power of the travel bloggers’ influence in swaying public opinion. Some of them invite the bloggers in promoting their respective places in the name of tourism and perking up economic activity in their locality. Aside from their potential influence, at most they are more convenient and easy to deal with, when it comes to coordination.

Even without the community’s coordination, bloggers consciously or unconsciously, have been promoting the destination through different kinds of medium.

Bloggers, in other words, are effective digital influencers that can bring tourists to a destination.

About Mass Tourism Though…

Along with blog or social media posts come tourists or travellers from all corners of the globe. The posts have encouraged them to go to that place and experience it on their own. The spread or “virality” of the post determines how famous a place is, and is further flamed by mostly local netizens themselves who are proud of that their place is now recognized.

By the time the tourists have come to the destination, they are greeted a multitude of people making their way to experience the place themselves—sometimes to a point that the place can no longer contain the massive number of people coming in due to lack of infrastructure, policy, and most of all preparation from the local communities.

It ended up looking like Divisoria—crowded, cramped, and often messy. This is the dark side of tourism, the massive one. A place has already surpassed its so-called “carrying capacity” or the ideal number of people or infrastructure while maintaining its “essence” or “spirit of the place.”

The promise of more livelihood jobs for the community, more profit for the entrepreneurs, and more tax income for the government, drives the promotion of these “untapped” places, to which sometimes hastily done and without supporting policy or infrastructure to contain the surge of tourism industry.
The public is very aware of the environmental impact and footprint of mining, to the point that all mining activities are “evil” to which it isn’t absolute. Many see eco-tourism and tourism itself as a saving grace in protecting the environment and the community. However, like mining if gone runaway, unregulated, and ill-implemented, can be as destructive as irresponsible mining as well. Tourism, like anything humanity does, does have environmental and social impact and footprint as well.

Tourism can change the local community’s social scene as well. As more people, mostly migrants, come to a locality, their culture may be in peril of being marginalized, commoditized, and even displaced.  It becomes more “Disneylandish” than being authentic. Cultures are endangered, and so are the locals themselves—especially the indigenous peoples.


Just look at what happened to Boracay and Sagada.

We also guess why Batanes is so darn expensive, and it has to.

We think that’s the reason why a tourism officer would like to keep this pristine beach up north their own local secret.

One blogger pointed out if he would stop blogging about their place because he was so discouraged on what he saw on social media—people irresponsibly trampling the roses in Cordova, or in Sirao in Cebu. Another one saw Laswitan Beach in Surigao full of bathers. We also remember the overcrowding in Kiltepan in Sagada when the movie hit “That Thing Called Tadhana” made the place famous, especially to the young crowd.

To be honest, pointing fingers to blame doesn’t make anything good or progressive. It’s only crab mentality with no solution at the end. The feeling of guilt, for bloggers or writers, doesn’t help as well. Blaming the community and the government wouldn’t solve the woes of mass tourism as well. It needs a more integrated approach—multi-sectorial if it has to.

Let’s see this challenge as a shared responsibility of every people: the community, the government, the bloggers, and other parties. Everyone has a part to make tourism or travelling more sustainable by being responsible to each and every action.

For bloggers, we think that it is up to us to ask if we would like to promote a certain place or write or share our experiences about it. There is no right or wrong. However, let our conscience guide us on what factors can we weigh in such as:

In the end, it is up to us whether we would share our experiences and promote the place, or not. It is still our choice, guided by our conscience. Let us not carry the burden of guilt alone if it does not come out ideally.

With so many travel bloggers in the community nowadays, we guess promoting a place may have reached the saturation point or have plateaued. We may see this opportunity as influencers, to promote a whole new level of travelling—responsible travel/tourism.

Based on our experiences, we may encourage people to be responsible with their actions whenever they travel to a destination such as:


Let’s get engaged in protecting the integrity of a destination.


As for the Local Community

Since tourism is a shared responsibility, the local community or government should consider the following:


And since we’re not public administration or tourism experts, more questions may be raised.

The local community has its share of responsibility in keeping their destination intact. Preparation and planning should be in place. They may learn from the tourism destinations that have already been impacted by mass tourism and ask themselves if they are ready for such, or not.


Bottom line for this lengthy post is that everyone has a responsibility to share when it comes to travelling and tourism, especially in protecting the environment and the culture of a place. Hence, we guess it is time that we carry it on a whole new level—let’s travel responsibly.
Labels: blogging policy travel urban planning
Where is it: Manila, Metro Manila, Philippines