The Heart of Urban Marawi City 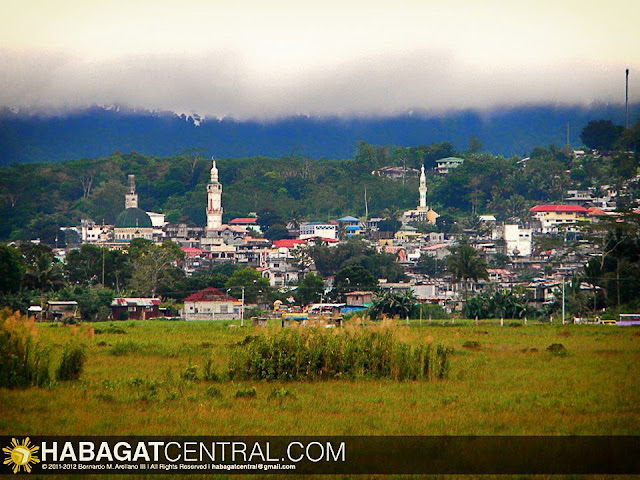 “Even most MSU students don’t dare to go to ‘town,’” a Maranao friend of mine once said.

Marawi City has been hampered with so much negative publicity in the Philippine mainstream that for the people of the lowlands, the only thing that makes them go there would be enrolling or visiting at Mindanao State University—never mind the rest of the city! People are too scared to venture out to the streets of the Maranao city.


Not minding the “scare tactics,” I went on exploring the urban core of Marawi City. My first taste was, finding my Maranao friend in the middle of Banggolo district, the commercial center of the city, by tricycle.


My first taste of Marawi’s air—it was cool. Actually a bit chilly since it was raining at that time. Blogger friend Doc Wends and I took the tricycle that took us all the way to Banggolo on an Eid Ul’Adha holiday. Marawi was really a different world. Streets that wind the slopes of the rolling hills, it reminds me of either Baguio’s congested back-door commercial districts or Tagaytay’s Mendez Junction, although bigger.

The city itself is—a bit disorganized and unplanned. The Americans, who occupied Marawi, didn’t made effort to lay out plans for the old Dansalan, so the roads grew out of traditional and ancient roads that radiate to almost everywhere.

Yet unlike the rest of the Philippine cities, Marawi’s skyline is dominated with so much minarets and domes of big mosques—almost everywhere in the city!

In the relentless search of Pacasum Square, I had a taste of downtown Marawi City that is known to locals as Banggolo.

The area is like a one big Quiapo, although lesser people and less dense. Though a bit rundown, it is vibrant and full of life. Banggolo serves as the commercial hub of Marawi City. Its main road, Gomisa Avenue or Quezon Avenue, is where most of the commercial establishments are located here, especially Marawi’s Public Market called Padian.

Over the horizon, the Ma’ahad Jamio Mindanao Al-Islamie or Mindanao Islamic Center mosque dominates its skylines, along with other minarets and masjids of the city. Within the area, several madrassahs (Islamic religious schools), toril (Koran reading center) and yes, mosques, live side to side with shops that goes from food to merchandise, to DVDs and all the way to the expensive antiquities that the Maranao people produce.

Finally, we found Ate Karimah, our guide in our stay in Lanao! And that morning, we’ve tasted the first of the Maranao delicacies!

City of Banners and Streamers

Marawi is fondly known to many Mindanaoans as "The City of Banners and Streamers." Going around the city back then, one couldn't help but notice that every nook and cranny of the downtown, or even in the suburbs, are full of tarpaulin banners or streamers.

"Alhamdullilah!" says one, while another greets a bar passer. Another one is a succession to the sultanate throne, then on the other hand a wedding.

Instead of the usual capitalist products, the banners and streamers are often congratulatory of achievements a particular Maranao attains, or greetings of welcome to visitors, or wishing those who will perform hajj a good voyage.

It is an interesting thing to see in this city.

The Night is Young…and there was silence

Instead of sleeping in Mindandao State University, I spent my night at the only lodging house within downtown Marawi City, since it was a relative of our guide. Most of the visitors wouldn’t even think of sleeping here “since you are a stranger in a different world” as what they say. Well, I was given the biggest room although the comfort room is a common one—but I was the only visitor in the house.

That night was the first time that I saw Marawi City fall asleep very early. Just after the isha’a or the evening prayer, commercial establishments close. A bit of vehicular traffic but not too buzzing. The call for prayer dominates the atmosphere.

And an hour later, there was silence—you can virtually hear a pin drop! The downtown was asleep. Marawi was asleep.

Forms of “night entertainment” and alcoholic beverages are not allowed here. And so, I sleep early. Good thing though I was tired with the whole day trip.

It wasn’t the church bells or my phone that became my alarm. It was the early morning call for prayer or fajr. It was still dark, around 5AM. The people woke up early. After that, something very interesting happened.

All of a sudden, Gomisa Avenue turned into a joggers’ paradise! After the prayer, people in either Western or Muslim attire jog the main avenue of the city. Instead of vehicles, it was full of joggers. A good way to start your cool mornings in Marawi!

I still got a lot to write about Marawi. I only spent overnight but the place itself exudes stories.

Intense fighting between the Philippine Government and the Maute Group has left much of Bangolo, Marawi's commercial area, in ruins.