A Short Stop at Kota Melaka 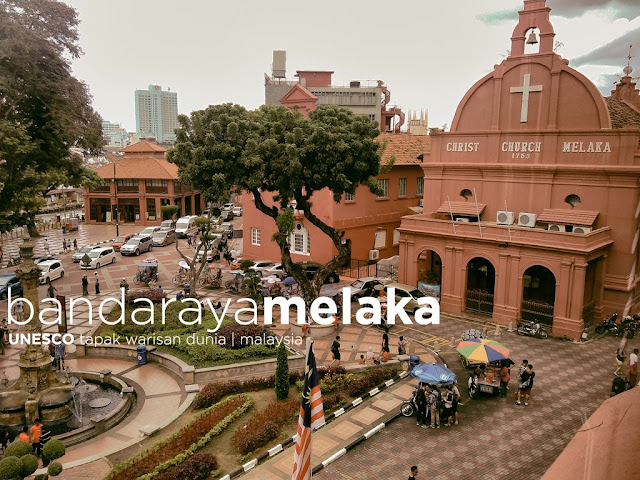 Since it was our first time going around Malaysia, the thought that the ancient port city of Melaka was just a stone’s throw away from KL was simply irresistible. It was immediately on my bucket list. Together with my Malaysian friend Fadrul, we went south—about more than an hour and a half journey through Lebuhraya Utara-Selatan (North-South Expressway) from Cyberjaya to Melaka.

Personally, I was a bit excited.

First time I’ve encountered the word “Melaka” or “Malacca” was with our Philippine history textbooks back when I was in high school. It described a bustling port city in Malay Peninsula, where in certain ways or another, influenced pre-colonial (proto) Philippines—Indic, Malay, or Islamization of Mindanao and certain parts of our archipelago, through trade and commerce.


Later I would find out that Melaka indeed is a very influential city, strategically located between Asian spheres of influences. It was a center of trade and rule of what was once a flourishing sultanate believed to have been established by a Sumatran Prince called Parameswara.

Its influence and strategic location in the region has attracted not only traders from Arabia, China, India and other parts of Asia, but also Europeans later in the 15th century.

The Portuguese first conquered the city sometime in the 1500’s. Later, the Dutch VOC would occupy it. Lastly, it fell onto the British hands from late 18th century which would later be integrated in the Straits Settlements up to Malaysia’s independence in the 20th century.

If we are going to tell you the entire detail of Melaka’s history, we could have written one chapter or a book for it! Haha!

To cut this section short, Melaka was IMMENSELY popular and influential in Southeast Asia as a hub!

It was a Sunday

It was a balmy and overcast Sunday noon when we arrived in Melaka. My friends have advised me that it can get very crowded and traffic going there might be bad on weekends. Luckily, it wasn’t that bad when we went there.


My first glimpse of this ancient bandaraya was rows of shop houses. Sure, these Malay Peninsula shop houses are everywhere, but thankfully it’s being well kept here. Of course, the city’s historic centre is a declared UNESCO World Heritage Site, together with Georgetown in Penang up north!

It was a Sunday and a few days before my birthday, we head on to the first heritage building in Melaka—the Church of Saint Francis Xavier. This 19th century neo-gothic church was my sanctuary for a few moments. There was no Mass that noon and we freely experienced the church and paused for a prayer of appreciation.

After that, we were welcomed with a row of red shop houses as we approached the Dutch Square and Stadthuys, the center of the city. This is where you can say “painting the town red!”

The Dutch Square, Stadthuys, and the hill with several heritage buildings surrounding it, is the city’s historic core. Much of the architecture in this area is a mix of all worlds—from the early Dutch, to British, and even Portuguese, with mix of Asian.

The City Center is one big museum complex!

In the Dutch Square, the Christ Church Melaka, said to have been built in the 18th century, dominates the public space, along with a clock tower.

If you like to have an overview of Melakanese history and society, the Stadthuys (Dutch for “City Hall”) is the city’s Muzium Sejarah dan Etnografi (Historical and Ethnographical Museum). It’ll give you a glimpse of the city’s prominence, story, and its people.

On top of the hill lies the ruined Geraja Saint Paul, said to be “the oldest church complex in Southeast Asia.” It was initially a small chapel (like the stories of our churches here in the Philippines) which became a Jesuit church sometime in the 1500’s. Aside from being a center of evangelization efforts, it was reputedly the base of Saint Francis Xavier’s missions in Asia. Later it was used by the Dutch, then finally the British. Today, its ruined beauty sits commandingly on top of the bukit.

Just at the other side of the hill is a replica of the Istana or palace of the Sultan of Melaka, which is also a museum.

Further down, the ruined gate of A Famosa is what was left of the Old Portuguese walled city, one of the oldest European colonial buildings in Asia. The Portuguese, having conquered the city, constructed a stone wall reminiscent of the colonial outposts in the 16th century. The Dutch continued to maintain the fortress-walled city after 1641. When the British came, having a high maintenance walled city was said to be costly, hence they demolished the walls. If it wasn’t for Sir Stamford Raffles, the founder of modern Singapore, there wouldn’t be any Portuguese-era walls left.

While there are several museums within the vicinity, we took the Muzium Seni Bina Malaysia, or the Malaysian Architecture Museum, which is for free. It gives an overview of different architectural designs that define the “Malaysian architecture,” from the rumah (houses), istana (palaces), masjid (mosques)—colonial or local—the diversity of design makes up the Malaysian culture’s built heritage.

We haven’t crossed the river yet

While museums were fun, I was getting a bit exhausted. The heat and humidity at that time wasn’t really a great time to walk—added that I wore jeans and dark-coloured t-shirt! We have to cut the museum tour and just walk among the noisy trickshaws with out of this world designs that cater to tourists. I guess that’s Melaka’s version of our own kalesas and sidecars in Intramuros Manila.

The afternoon isn’t over yet. We haven’t crossed the river yet. We will continue our journey to the other side of Melaka River later. For now, let’s rest from the overloaded information!

There is simply too much in Melaka for a short blog post!

Next post, Jonker Walk and the other side of the city.
Labels: architecture Asia Culture and Heritage Geography history Malaysia urban planning
Where is it: Malacca, Malaysia