Billboards, Visual Clutter, and the Heritage District of Iloilo 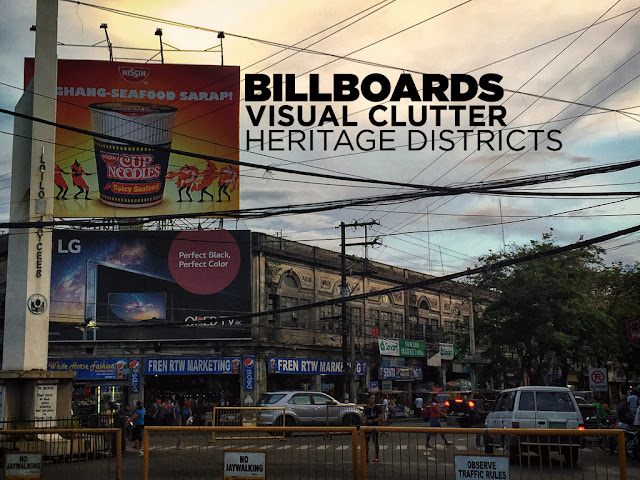 Billboards--signs of commerce and marketing. They are integral in commerce informing their markets of their products or services, especially on commercial districts. But what if, these billboards seem to steal the limelight and character of the heritage districts? In Iloilo, there seems to be an ongoing war between the capitalist billboards versus appreciating heritage and history--especially in its historic commercial center, Calle Real.

Billboards are Part of Commerce

Calle Real, being the center of trade and commerce, is no stranger for billboards and ads. Historically these have been in the district for years, especially in its heydays as the "international sugar trans-shipment hub" in the Philippines. It simply is part of the economic life of a city, an urban area.

As time progresses, billboards have become bigger, bolder, and even more intrusive visually. From the old, painted signs, these became neon. After the era of neon has ended, comes the PVC signposts.

In the great war for the target market, the bigger, the bolder, the better, at to what price?


The Great Billboard Wall of Guadalupe

Now, Iloilo is not alone in this trend of "marketing war for bigger signboards."

EDSA, Metro Manila's most infamous thoroughfare, is littered with big signboards, notably in Guadalupe Bridge crossing Pasig River. These gigantic billboards, often looked like walls of tarpaulin, takes advantage of the humongous pedestrian and vehicular traffic EDSA has, and it also has garnered some controversy in the past--from the conservative folks irked at bikini clad ladies, to advocates who called for regulation of billboards because it is a "traffic hazard."

Now, that's marketing, but isn't it visual cluttering and pollution already? That's an equivalent of a website full of ad-ware, malware, and sponsored posts. There seems to be too much visual clutter! Sakit sa mata!

The Historic Commercial District of Iloilo, also known as "Calle Real," has witnessed its transformation from a common rundown old and haggard downtown district Philippine cities usually have, to a testimony of Iloilo's prominence in shaping the socio-economic history of the country during the colonial times. It was later recognized as a "Pook Pamana" or a "Heritage Zone," by the National Historical Commission of the Philippines--putting more laurels to its crown.

As soon as awareness has hit the mainstream Ilonggos and Filipinos combined, there was a boom in cleaning up the heritage buildings--repainting, cleaning, and perhaps retrofitting, to make these heritage buildings look more presentable to the tourists, visitors, and instill pride for the local Ilonggos.

The Iloilo City Cultural Heritage Conservation Council has set up guidelines on how Calle Real Heritage District should be maintained and improved, back in 2009. 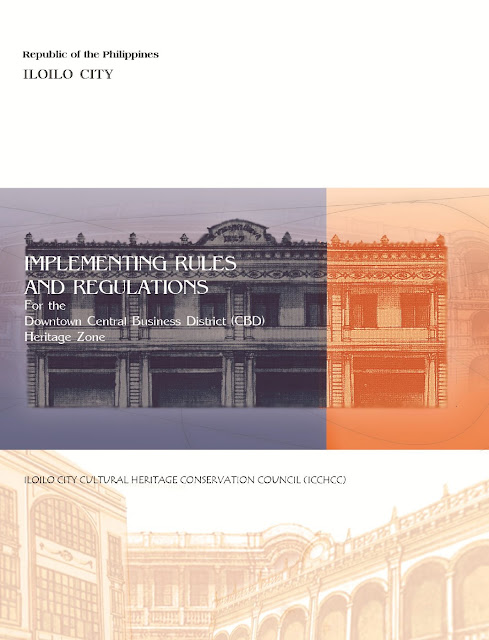 Despite the implementation, one couldn't help but notice that while some establishments have complied, others haven't. Worse, some of the identified buildings, which are part of the Heritage District catalogue, seemed to have covered the entire facade of a giant billboard!

There are some buildings that is cluttered with ads from a big telco company. Others come from breweries and other commercial sectors.


It seems that billboards either become nuisance in its surrounding architectural conformity, or takes attention all by itself by covering the entire building.

That seems to be a downer if I'm the tourist, right?

It wasn't the first time that billboards in the heritage district were called for. During Dinagyang Festival season, heritage buildings are covered by big commercial ads. It would have been a great icon for the celebrations if the background of the street dancing would be Iloilo's iconic streetscape, right?


A Need for Dialogue

Also, we heard that the tenants and building owners were given time to adjust to the standards implemented by the guidelines.

Personally, instead of going "Pinatubo" over the billboards in the historic district, we think that a dialogue between the tenants, the City Council, and the advertisers would be a great thing in bridging the gap between marketing and taking care of the heritage district.

There is Section 17 of the Implementing Rules and Regulations for the Downtown Central Business District (CBD) Heritage Zone on signage, that may be followed by the marketing advertisers or the tenants themselves.

For the advertisers, we think that we can go creative on how to market your products and services on specialized areas--such as heritage districts, without making it either too intrusive or too nuisance. You got the best talents and we believe you folks can cross the middle way for it.

Also, we call in to our Local Government to set better regulations or rules on advertising in the city, most especially those in the downtown area and other central heritage districts such as Jaro, Molo, La Paz, and Villa Arevalo. We think we need to revisit Regulation Ordinance No. 2013-330 which regulates streamers and billboards in Iloilo City.


We guess we can examine and improve the implementation of these rules for the benefit of the greater public.

In the end, we still believe in the power of dialogue--we just hope that by opening this up, it would make Calle Real better for the Ilonggos and visitors alike.
Labels: architecture Asia Culture and Heritage Philippines Visayas
Where is it: Iloilo City, Iloilo, Philippines