The Southern Crown: Iloilo's Calle Real and Her Majesty the Lin-ay 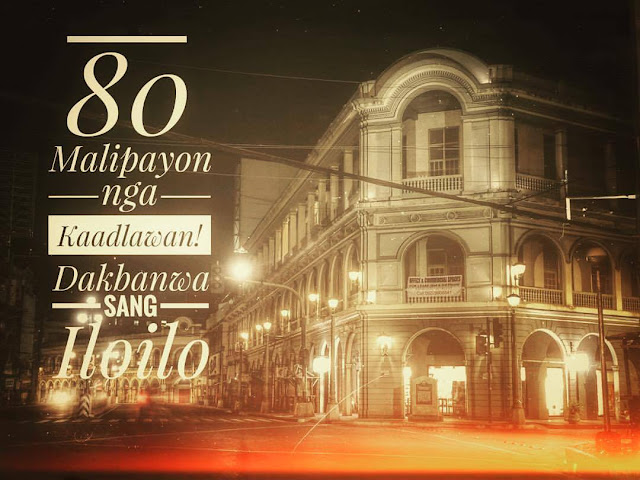 When sugar was still sweet, the people in the central islands of the Philippines established an “empire.” The once mosquito-ridden and swampy fishermen’s village became one of the islands’ international hubs—second to the capital. Its influence was widespread and brought a legacy that changed the islands’ history and society. Lin-ay, the daughter of the mythical ten chieftains of the west, became the Queen of the southern islands. Then her children constructed magnificent buildings in its heart, along the Royal Way—a testament of greatness of an era. Seemingly Gatsby-ish isn’t it?

Today, the “Royal Way” is JM Basa Street, otherwise known as “Calle Real.”—However, I like to encompass the entire historic city center of Iloilo. The Ilonggos’ very own Calle Crisologo. The story of the historic street seems to tell the story of Iloilo herself.


Calle Real is located right at the historic center of Iloilo City—the old downtown itself. Local historians, and even the oldies, remember this as the center of economic trade and commerce of what was once Philippines most important port city after Manila. It was “The Main Street” or some even likened it as “Escolta of Iloilo.”


The street, and together with the entire neighborhood that spans blocks within the city center, tells the
story of Iloilo’s glorious past being the hub of transshipment of sugar to the world.

Iloilo had its firsts and bests of then-modern living, outside Greater Manila, like cinemas, electricity,
shops that sell local and imported products, offices, hotels, foreign consulates, international banks, and a lot more. Calle Real is in fact fuelled by the nearby Muelle Loney or the Iloilo River Whaf—the port where transshipment is done.


And with all the “latest,” trends in architecture back then brought from the West, such as neo-classical, Art Deco, Art Noveau, and so much more. One couldn’t notice how the city, once a former fishermen’s village of nipa huts, became one of the colony’s most important cities—and it was all attributed to sugar.


Back then, party-party pag may time is really the call in the streets. Rich people were entertained with the latest movies from the West, or the bodabil perhaps.

On the other side, people from rural Panay flocked and worked at the port, at the fields of Negros, the shops at the city, and so much more, to keep the machinery ongoing.


The good life of the rich and famous, the noise of the calesas and the cars, the toiling kargadores of the wharf—of bustle, luxury, decadence, pomp, influence, power, and even decadence. The southern city’s main artery as it was in its “golden age.”

When World War II came, just like Manila, Iloilo’s economy was brought to a halt. Despite the heavy bombardment this city took, the buildings of Calle Real survived—and even survived another wrath several years later—of earth (1948 Earthquake that nearly destroyed the heritage churches of Panay) and fire (the great fire of Iloilo in the 1950s).


Then Iloilo lost its prestige—a victim of its own dependence to mono-crop industry. Negrense hacenderos have no need of the already conflict-ridden port on the other island. The port became a battlefield of two factions. The sons and daughters of what was once the Queen of the South, left in search of greener pastures.


The Queen collapsed—starts to die within. Obesity, I guess from all the sweets she ate.

The once busy port life became stale and Calle Real wasn’t the way it used to be. Left by seemingly hopelessness at that time, the once bustling monuments of significance and grandeur was left in the doldrums. Just like any other cities in the Philippines, the locals started to migrate away from the city core—and urban decay starts right at the heart of this historic city gradually.

There was a point in Calle Real’s life that its once luxurious buildings became a hub of vice and grime. Left to fend for itself, the old historic core of the city didn’t enjoy the way it was. Not much commercial items, foreign consulates left, some banks closed, some flooding, and the proliferation of vagrants and as time goes by…even the monuments of its grandeur started to fade away.

Karma became a biotch for her.

And for the newer generation, they see Calle Real as not a place “to be.” Malls are better places to shop and dine. Para lang na sa maru kag gapangita baratohon ang sa city proper, as one may say. Calle Real was almost forgotten, and so is the pride and praise for Lin-ay. She’s no longer “a celebrity” in the eyes of the Philippine nation back then.


The “Crown” was Lin-ay’s Alpha and Omega.

When I came back to Iloilo almost a decade ago, I found Lin-ay on her usual self. She no longer bears that smudge of mascara of luxury on her eyes, but a simple no non-sense make-up clad in patadyong. Those faint smudges of her beauty though were already revealing. It looks like she has been going on some lifestyle changes.


Calle Real’s old buildings stood the test of time, but rather they are becoming “haggard” or tired, with all the soot and the grime it has, tangled with too much pancit miki bam-i cable wires.

It was sometime early in the 21 st century when the city government, together with concerned Ilonggos, started to take notice of the legacy Lin-ay and her children left for the future. Some well-traveled Ilonggos started to see the great potential of the historic center of Iloilo City with the likes of Melaka in Malaysia or Macau, albeit subtle. Then an ordinance was passed to protect the heritage site.

It would take years before Calle Real became noticeable to the eyes of the current generation of Ilonggo masa.

Back then, the people wouldn’t mind. Today, it is the jewel of pre-nuptial shots and tourists visiting the city. Back then, taking out your camera or gadget in this street is like putting your feet on your grave. Today, “picture-picture ang mga turista.” The sidecar driver, who have been there for years even wondered, “ngaa kadamu na subong gapamiktyur diri haw?”

Then suddenly, there was a renovation spree of these buildings. What we thought it wouldn’t happen in our lifetime, gradually flourished in our very own eyes. The once “haggard-looking” heritage buildings were restored bit by bit, stone-by- stone.

Marred by decades of neglect, vice, and haggardness all over, Calle Real is transforming, as Lin-ay too is starting to brush up. It will take time and humongous effort in transforming the treasure that Ilonggos had all of these years.

Finally, Lin-ay went to the gym and gone Zumba, and had a healthier diet as well. From that aged face, she’s gradually “blooming” again—albeit different from whom she was.

While Calle Real still has a long way to go if we compared it to Macau or Europe, or even the Bund of Shanghai, she can be done gradually. Reviving or renovating an old district in the middle of a highly-urbanized city in the Philippines has not been a very easy task. The question of marketability, tourism, infrastructure support, displacement, gentrification, and sustainability are still there. If done right, the revitalization of Calle Real becomes successful, and it may become a role-model in heritage preservation in a struggling yet growing urban landscape of the country.

After all, Calle Real IS the alter-ego of Lin-ay, the Lady and the daughter of the mythical ten datus of the Borneo. Lin-ay and Calle Real are one. It was here when she became Royale, a celebrity and influential mother. It was also here where she fell in the mud of neglect as karma of her decadence.

And I believe it will also be here when she will eventually rise from it—no, not the crown that has corrupted her mind, body, and soul, but an enlightened and eternally beautiful lady.


Note: This was originally published in The Daily Guardian sometime ago. I forgot what year it was, but it was during a Dinagyang special.
Labels: Asia Culture and Heritage history Iloilo Philippines Visayas
Where is it: Iloilo City, Iloilo, Philippines