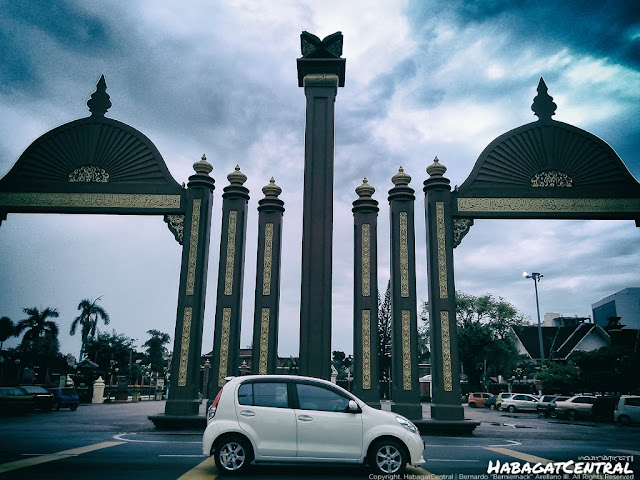 Our stay was short. It was rainy, yet it didn’t hamper us in going around Kota Bharu, the capital city of Kelantan state in northeastern Peninsular Malaysia. Although it may look like any other Malayan town, the short trip somehow gave us some local experience—a bit deeper in the Malayan culture.

The city is located on the western banks of Sungai Kelantan, and more than a couple of kilometers from the Thailand border. Established in the 19th century, it became the royal capital of the Kelantanese sultanate and subsequently the State of Kelantan after the independence of Malaya from British rule. It was also here when the Japanese Imperial Forces first invaded the peninsula to which ended up with the surrender of Singapore.

Unlike its contemporaries in the western coast, Kota Bharu is known to be one of Malaysia’s conservative cities. Muslims take up most of its citizens. Visitors are advised to dress modestly when traveling to the city, observe and respect local cultural customs.

And although it was rainy that November day, the city moves on in its usual beat.

We’re really fans of old towns or city centers. For us to experience “what is truly local,” we head on to the old city center of KB—which is petite, laidback, yet walkable.

The city radiates from the Istana Balai Besar, the royal palace of the Kelantanese sultans. Up to this day, the sultan of the state still lives here, together with his family. We can only get a glimpse of the vernacular architecture from the gates—which is marked with Jawi and Arabic inscription, and a tall monument with a Holy Qur’an on a Rehal (book stand) on top.

And while we can only guess what’s going on inside the royal palace, fortunately Istana Jahar and Muzium Islam, which is located just beside Padang Merdeka are open to the public. These heritage buildings gives us a glimpse of Kelantanese culture and history, though our limited time didn’t permit us to go inside at that time.

Walking along Padang Merdeka, we get a glimpse of the mighty Sungai Kelantan (Kelantan River) while locals chill and do their usual stuff. It was a laidback morning—way laidback. Was it because it was a weekday or it was just drizzling around?

As we go back to the Kelantan State Museum where our good friend of ours was having a his field work, we went through several blocks of old shophouses. While some of it looks new, but it has still maintained the “standard” Malayan shophouse seen in other parts of the country. It was clean yet unlike in Melaka and KL, the locals dominate the streetscape.

Too bad, we haven’t have time to go to Pasar Siti Kadijah, the city’s main marketplace, to buy some Kelantanese batik polo.

Bulatan Jam Besar, where the Musuem is located, looked like some Middle Eastern green space, with palms similar to the date palms, and an Arab-influenced clock in the middle of the park. What makes it “Kelantanese” are the shophouses and traditional Malayan bangunan or buildings. The park somehow projects the image of the city as an bailiwick of Islam in the country.

When we arrived at the Museum, our friend wasn’t finished yet. It was raining outside and we don’t want to risk getting sick and wet, so we waited for him at the State’s Tourism Office. While taking time, it’s fortunate to have struck conversations with the officers there—one of which is very familiar with Filipino culture—from the traditional to Jericho Rosales (yes, they’ve said “Mahal na Mahal Kita” to us several times on our visit—a famed quote from one of our teleseryes). We were given insight that the famed Malaysian kite, seen in Malaysian Airlines’ logo and tourism commercials called “wau bulan” came from this state. That they too practice wayang kulit traditionally in Kelantan, though has been discouraged due to its “non-Islamic” affiliation. That the state was named from lightning or kilat (hence, it’s sound so familiar for us Filipinos). It was really a good experience with them that we established rapport. It didn’t bore me. It was warm, despite the cool and humid weather outside.

Just as when we were having some good conversations, our friend was done with his transaction and we need to head back to Terengganu for our flight back to KL that night. We’ve promised that sometime soon, we’ll go back to KB and stay longer—and when the sun is shining.

The night before we went around the city, we were stuck at Hotel Perdana because of the rain. With nothing to do and shrugging the possibility of eating at a nearby KFC, we went down to the lobby and asked the receptionists where can we eat “locally.” The lady receptionists, in their black hijab and uniform, politely suggested for us to eat at a street hawker just behind the hotel. Their warm hospitality took a higher level when they found out that we were Filipino and asked if we were part of a soap opera shooting nearby. These funny and light events made our stay in KB memorable.

And so they led me, using the backdoor, to the lone street hawker just behind the hotel serving Nasi Kerabu that drizzly night.

“Satu Nasi Kerabu sila,” (One nasi kerabu please) we said in our broken Bahasa. The food is widely known in Kelantan and Terengganu.

We were given a hefty amount of dinner food. Blue rice served with keropok (Malaysia’s own kropek fish chips), shallots, chili, ayam goreng (we added that one), and some ikan bilis (dried and fried anchovies). Using our hands, we ate it like it was in some fiesta at the barrio—a trait that we shared, we guess, with our Malaysian brothers and sisters. We did some campur (mixed the ingredients), ate it along with some warm teh tarik (steeped milk tea). All for more or less RM4 (around PHP50 or little less than US$1!)

The day after, we had our breakfast in Kopitiam Kita, one of KB’s famed morning breakfast stops. We were overwhelmed with the selection of food—from different nasi lemak, nasi daging, nasi kerabu, roti titab, and a whole lot more!

The place was full to the brim, with people having their warm cup of kopi (coffee) along with a hearty breakfast that is truly Kelantanese Malayan.

We ordered some roti titab (toasted bread with condensed milk and soft-boiled egg on top) and some other nasi out there—and it was sedap! (delicious)

Looking Forward in the Future

Our trip was short. It was overnight. I wasn’t able to see the wayang kulit that our friend had that day. It was rainy, sober, and had limited budget since we were heading home that night. For such a short stay, we did enjoy our short break in KB. Laidback, warm, and far from the maddening tourist crowd, we think it is what we need in our busy and often fast-paced life.