The Surreal Experience of the Black Nazarene Traslacion 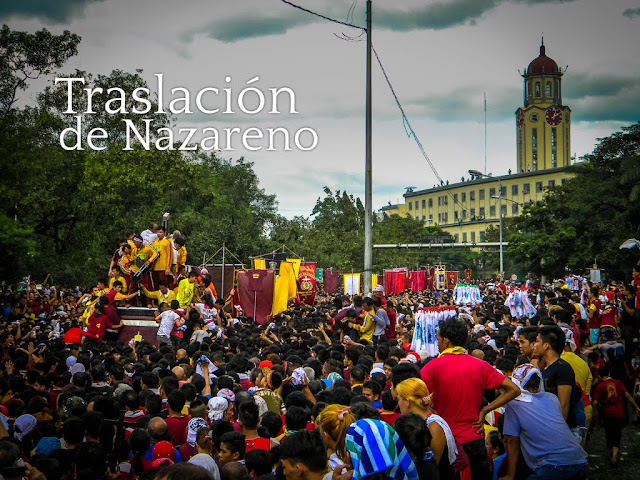 One word: Surreal. This describes best the Procession of the Black Nazarene, or Traslación de Nazareno (literally “The transfer of the Black Nazarene”), one of the Philippines’ most anticipated and well-known festivities of devotion and folk Catholicism. Thousands (millions as the authorities claimed) of faithful troop down to the country’s capital in an annual tradition that seems to defy logic and beyond words, Unlike other religious Catholic processions in the country, this one is far from solemn—and that is its trademark.

This was our first time. 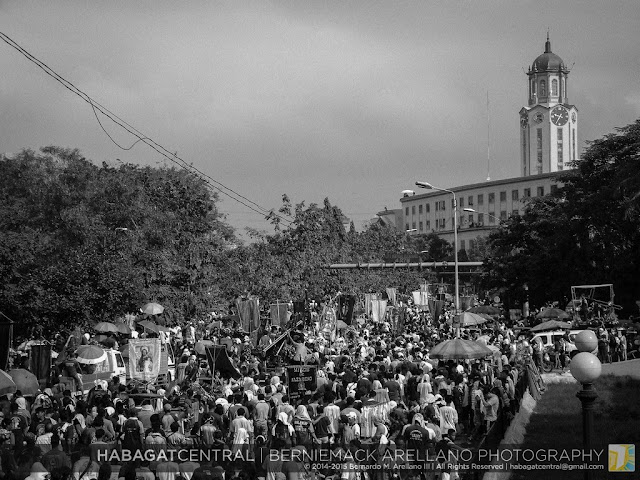 Grey sky morning greeted us that 9th of January, with cool winds from the northeast, bringing drizzle to which the devotees see it as a blessing from the heavens. Thanks to the National Museum of the Philippines, we get to have a “front row” view of the passing procession, in which it is thought to reach the area at around 9-10 in the morning. 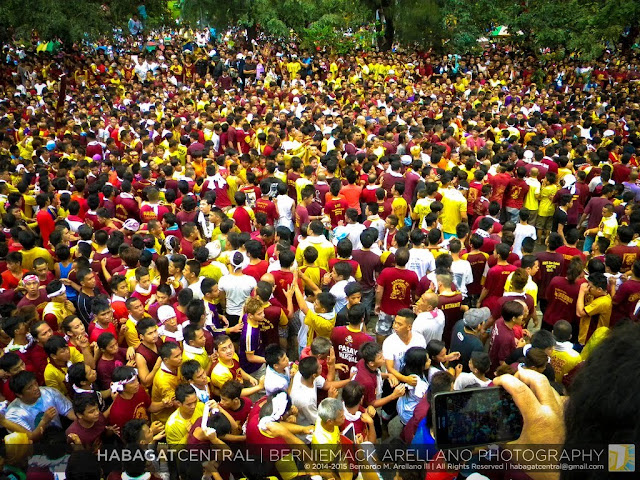 Thousands of yellow and maroon clad men and women troop the streets. Some were heading to Quiapo, others heading towards where the Andas is, the carriage of the image of the Black Nazarene. The mood of the “American Manila” as we call it was up a bit. The streets were closed, and the mood was festive. 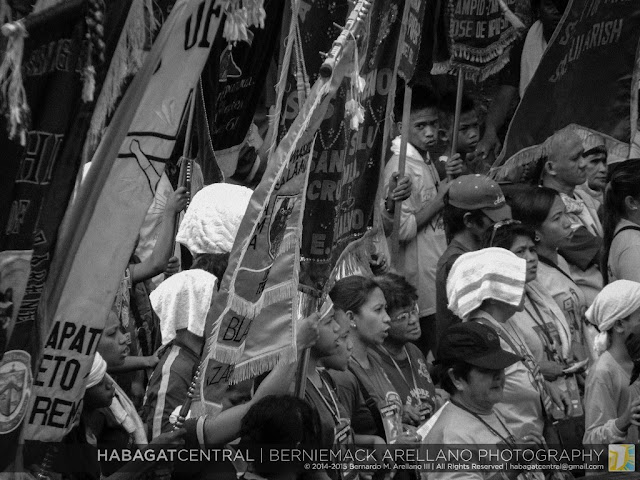 At around 9 in the morning, the first of the flags and banners of the devotees have passed by. The procession has started—albeit slower than it was the previous year.

Hecho en Mexico (Made in Mexico) sometime in the 17th century, the Recollects were the first ones to “promote” the veneration of the suffering Christ in the Philippines. It was once enshrined in the Church of San Nicolas de Tolentino, currently believed to be somewhere in Luneta. In 1787, Archbishop of Manila Sancho de Santas Junta y Rufina ordered the transfer of the image to Quiapo from the Recollect church. From then on, it survived several fires, earthquakes and the destructive 1945 “Liberation” efforts of Manila.

The procession of the Black Nazarene within the streets of Old Manila is a re-enactment itself of that lipat bahay or transfer of the said relic to its new address north of the banks of Pasig River.


Even back then Quiapo has been a pilgrimage center for the Nazareno. Philippines’ National Hero wrote a chapter in his novel El Filibusterismo depicting how a corrupt priest would want to be assigned here.

As the Black Nazarene inches towards the front of National Museum, you can feel the aura of people pouring their efforts towards the small carriage carrying the image. In the sea of humanity, the Andas (the Black Nazarene’s carriage) look like a boat trying to make it through on a muddy river. 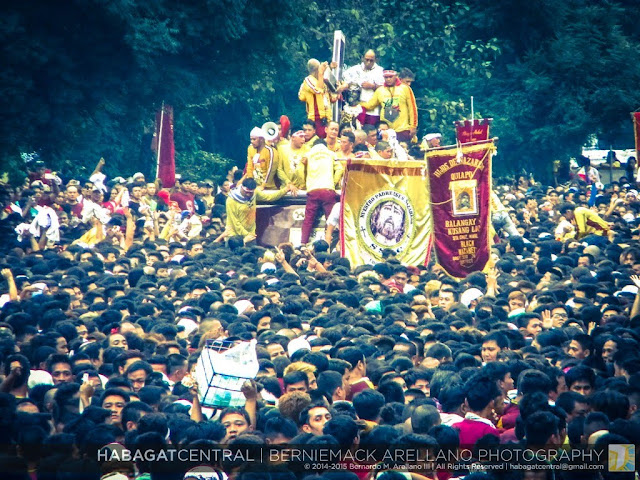 Barefooted men, clad in maroon and yellow shirts dominate the procession. They have intent to do namámasán or pulling the rope of the carriage in their right shoulders, as it resembles Christ carrying the cross towards Calvary. The faithful believes it has healing or miraculous powers, for as long as they do their panata or vow. 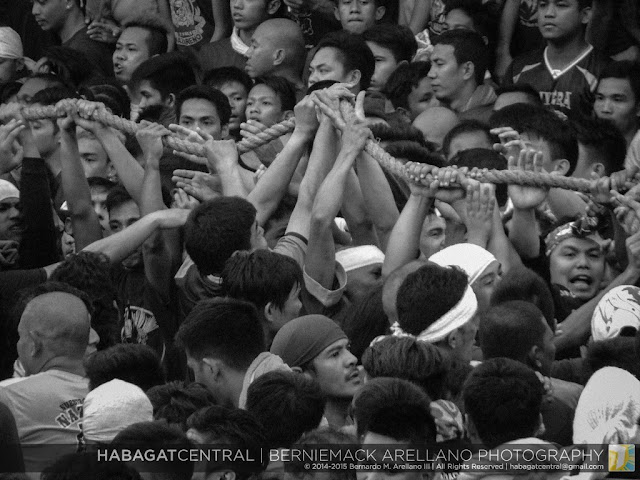 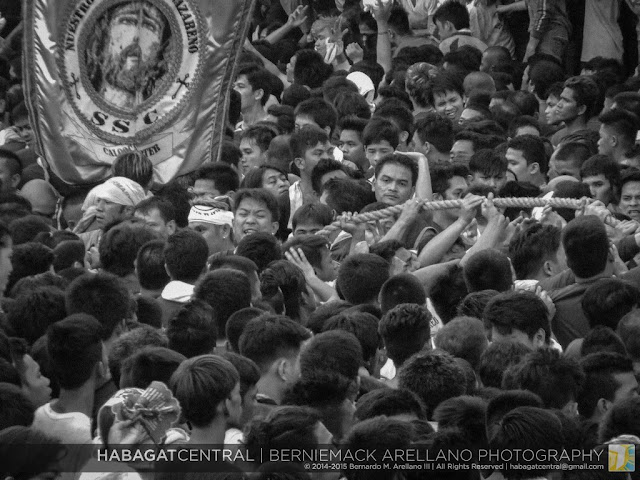 Some “traditions” in pulling the rope: 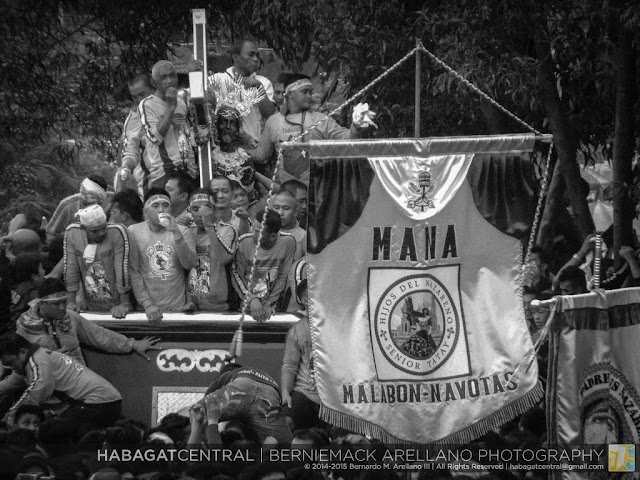 Thousands wave their white towels and throw them to the Andas, where the Hijos de Nazareno¸ or the guardians of the Nazareno image, grab it, dab it to the image, and throws it back to the crowd. 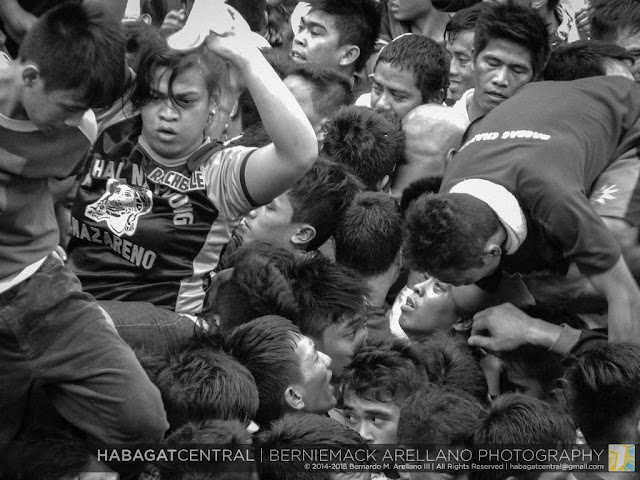 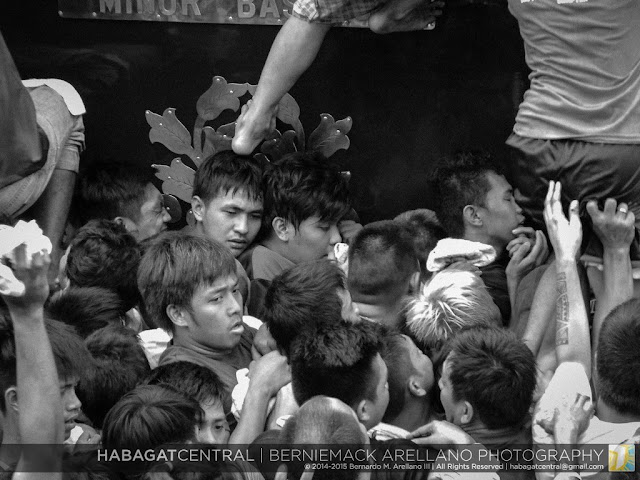 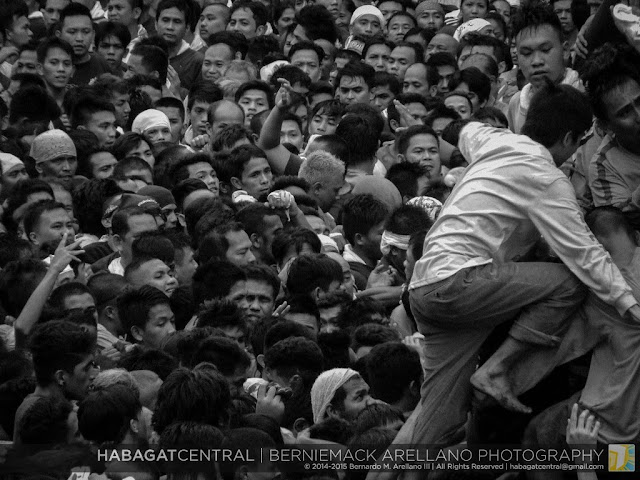 For some who are not used to this, they may think it is some scene from a zombie apocalypse. They said that men in there are driven by instinct to survive and to reach the goal of getting near the Poon, no matter what. They were acting as if they are in trance. 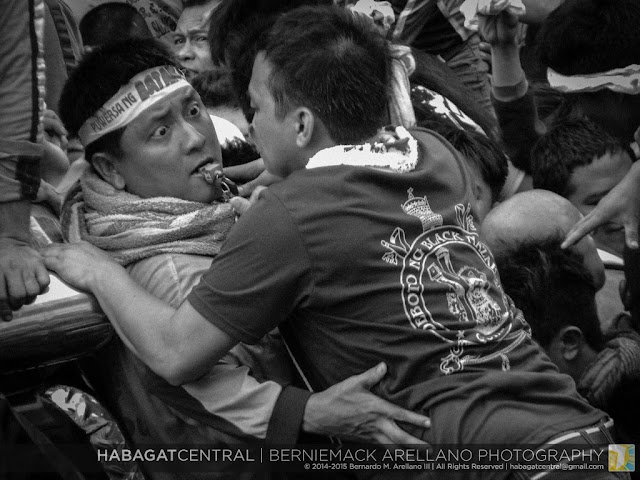 Words and even text couldn’t describe how these people would do everything just to get near it with such energy, aggressiveness, and chaos. We are left to ask on where they get their energy for their devotion despite suffering the mad crowd of the procession. 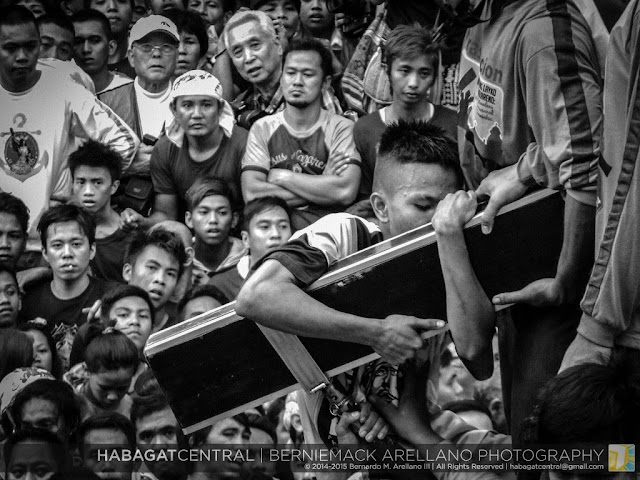 A friend of mine, a devotee of the Nazareno, said this:

“Yung naglalakad ka ng nakayapak at kailangang mag-risk para sa aming panata ay para maalala namin kung ano ang pinagdaanan ni Kristo para mailigtas tayo,” (We walk barefooted and the need to risk our lives just for our vow is to remind us of how Christ suffered so that we can be saved from damnation) he said.

For them, being injured or even die during this yearly feast is a fulfilment of their vow to God. 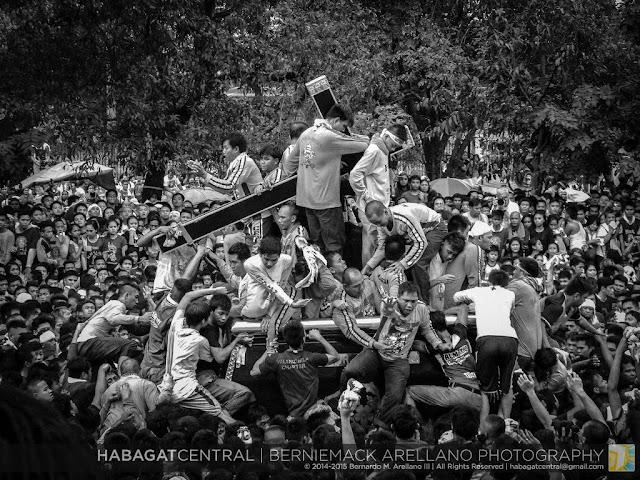 To us, we were stunned at the sight. We’ve been through a lot of religious processions, but what makes the Nazareno so unique is its chaos and show of devotion (or to some as fanaticism). 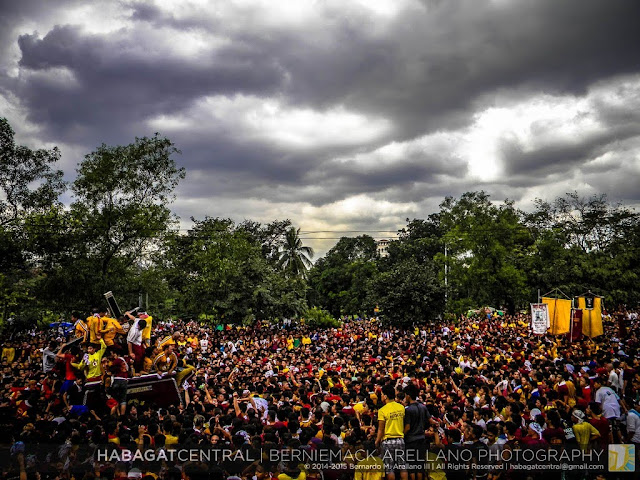 
It took an hour and a half for the Andas to pass the entire span of the museum and moved closer towards Quiapo. It only took out a kilometre out of its 7 kilometer journey back to the Basilica. We were already expecting that it’ll reach its final destination by the next day. 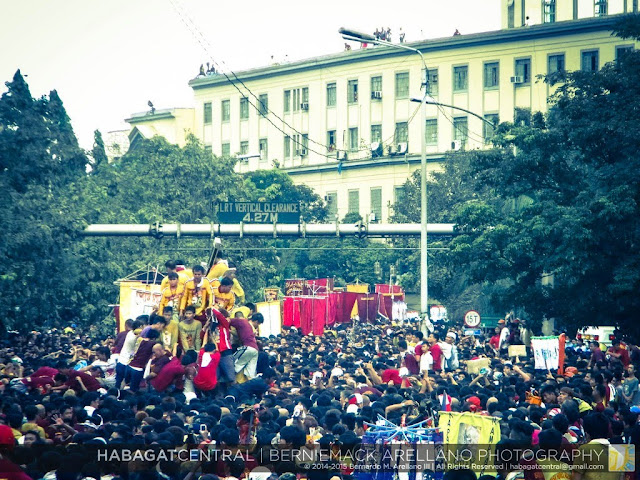 As soon as the built up of tension, human drama, and climax came, it was swept with a solemn procession at the back of the Andas. Men, women, children, the disabled, and the elderly solemnly pray. It was an exact opposite of what we saw a few minutes ago. The chaos dissipated with murmur of prayers and orations. 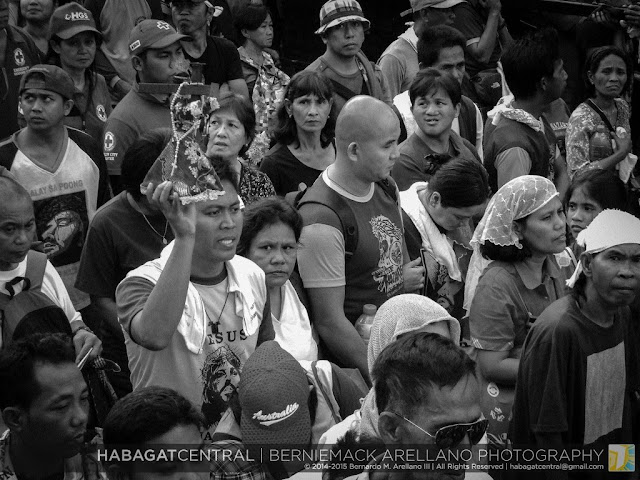 Incredibly, the line of praying people was short. Only a few minutes that they have passed, the street sweepers were already cleaning up the mess. A few meters behind it, vehicular traffic has resumed.

After that, Padre Burgos Street and the National Museum were spanking clean, as if nothing happened.

We salute the Metro Aides of the Metropolitran Manila Development Authority (MMDA) for cleaning up the mess.

To be honest, even if we have witnessed the actual event, we are still left to ponder on a lot of things about the Traslacion. We tried to understand on how and why people have to endure such hellish conditions and will do everything just to be near the image?


Personally, after being with several religious processions, including the big one at Cebu, we’re left to ponder on why such chaos was necessary? Also, was media hyping the said event, to the point that it should be a “national concern” (which has irked some people in the provinces and remarked it as overacting)? These are only some of the questions left unanswered.

The Traslacion for us is something beyond comprehension, we guess. However, it was an amazing show of force and faith amid the chaos, the solemnity and the complexity of the Black Nazarene Procession. It was indeed surreal.
Labels: Asia Culture and Heritage Festival Manila Philippines
Where is it: 363 Quezon Blvd, Quiapo, Manila, 1001 Metro Manila, Philippines