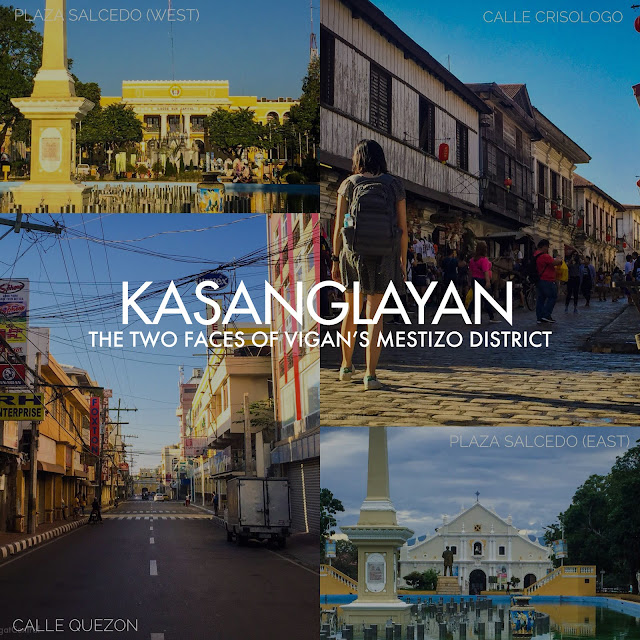 It has been a while since I wrote a blog post. We have been very busy for the past few months--work and most especially it's our thesis year. I'd try to write from time to time as a little distraction from these busy days. And for the first blog post in a while, we'll relate it to my upcoming graduate school paper: that sense of place, heritage spaces, and the City of Vigan--a UNESCO World Heritage Site, particularly the historic core of the city called Mestizo District, also known as Kasanglayan.

Downtown Vigan, where most of the heritage structures are at, was also called "Mestizo District" or Kasanglayan. This is due to the fact that most of its residents are of mixed-blood, or mestizo in Spanish. However, rather than having a mix of Spanish-Ilocano (or proto-Filipino), most of the mestizo families living here are of Chinese-Ilocano roots, or Sangley. Hence the other name of the area is also called "Kasanglayan" or "Place of Sangley People."


The interesting facet of Chinese migrant population in Vigan indicated its prominence as a trading post in northern Philippines, to which it is closer to mainland China and is along the Galleon trade routes (Cape Bojeador route).

Unlike Intramuros in Manila, however, Kasanglayan is not a walled city.

Today's Mestizo District has two main streets that converge in one public civic space reminiscent of the plans of the Spaniards in its colonies, through Leyes de Indias or Law of the Indies.

The main streets in the Philippines are usually areas where the main commercial activities are held. Business establishments such as shops, banks, restaurants, and others are located in these so-called "main streets." During day time, people converge here from different areas to do their own business, or transactions.

In the City of Vigan today, there are two "main streets: Crisologo and Quezon. The former was once the business district of a by-gone era, with shops and markets of the local mestizos were located in the big shophouses seen today. On the other hand, Quezon Street is the current main street of the city, with shops, banks, and a mall located here.

These two streets are the economic drivers of the city: one for the locals, and the other for the tourists. Each has its own character, each has its "sense of place."

Crisologo Street is perhaps the most well-known street in the city, and perhaps the entire country. It is the heart of the UNESCO World Heritage Site due to the still standing heritage shop houses.


It was once the "main street" of the city--specifically during the Spanish and American colonial eras where it was once a mercantile street.

These houses, both imposing and grand, functioned mostly as shop houses--where offices, shops, or storage are on the ground floor, while the upper floor is reserved for its residents.

Those who grew up in Crisologo remember the scent of tobacco leaves being dried and stored in these shop houses--"pabanglo ti Vigan" or the "scent of Vigan."

The street is lined up with well-preserved heritage houses, mostly constructed during the Spanish colonial era and has survived wars, earthquakes, fires, and even political unrest.

However, like Rome and Iloilo, it has experienced decline and out-migration, leaving the old homes with the caretakers and at the mercy of the elements.


Today, tourists fill up the void of what was the mercantile district in Crisologo. The shop houses that once catered to tobacco industry and the locals, now are mostly souvenir and antique shops. Some have turned into cafes, others into establishments catering to the tourists who takes photos and awe in its well-preserved architecture.


Crisologo has a lot of story to tell beyond its architecture and nostalgic feel that is worth series of posts in the near future. The story of struggle for preservation and recognition as a UNESCO World Heritage Site later in the 1990s and changes it has undergone for the residents is worth discussing--and hopefully be captured on our study.

There is more to these houses that meets the eye.

Quezon Street: The Other Main Street of Vigan

While Crisologo Street's businesses tend to cater to the visitors of the city, with its imposing heritage shop houses, Quezon Street caters mostly to locals and Ilocanos alike.

And because it is devoid of these heritage structures, and is mostly out of the core and buffer heritage zone of the city, even if it's only 300 meters away from Calle Crisologo, post-war architecture dominates the area. It looked like a "typical Philippine small city main street," that some consider "character-less" except its commercial purpose.

What it lacks in architecture and aesthetics, it compensates by being the city's current "main street." Most of the banks and mercantile shops are located here. The old public market site (now Xentro Mall Vigan) was once located along Quezon Street. The area where the street runs thrugh has that "typical 'probinsya'  commercial center" feel.

And what's interesting is that during weekdays, there are more people here than it is in Crisologo. It reverses during weekends and holidays, when the latter takes command of the city's commercial life.

While the two streets are distinct in nature, people—locals and tourists alike—still converge in Plaza Salcedo and Plaza Burgos. The area is where the Provincial Capitol of Ilocos Sur, the Metropolitan Cathedral of Vigan, the Archbishop's Palace and Convent, and the City Hall are located.


This is the beating heart of the traditional plaza-centric layout of Philippine towns done during the Spanish colonial era, prescribed by the Law of the Indies.

Crisologo is located on the eastern side of the plaza, along with a smaller plaza, Burgos. Quezon on the other hand is located on the western side—parts bordering and outside the buffer zone, except the Capitol area, which is part of the Core Zone.

Tourists and locals converge at the city's heart--the plaza complex, and still is functioning as it was envisioned by the Spanish colonial urban planners.

Plaza Salcedo, the larger public space in front of the Capitol, Cathedral, and the City Hall, has a lagoon and a monument where night time shows of dancing fountain is watched by visitors and residents alike. It is also in this plaza that the hero Gabriela Silang were executed, along with other martyrs. Its expanse indicates its importance as a main town in northern Philippines at that time.

On the other hand, concerts and other civic activities are done in a smaller Plaza Burgos. It was named after one of Vigan's most prominent sons, and one of the martyrs that make up the Gomburza trinity. The empanada and miki shops are located here.


It is in the plaza where the distinct characters of Quezon and Crisologo starts to blur. The shops surrounding the plazas does not only cater to tourists, but also to the locals as well. It in this area where there seems to be a convergence of the "two mercantile faces" of the city.


Myriad of "Senses of Place" in One Downtown

For the visitors, Vigan is the old world charm and heritage. For the locals, it is both that old world charm, heritage, and the home that they know of. Despite its small area size, the city's Mestizo District exhibits different characteristics, or "a sense of place."

The two areas: Crisologo and Quezon, doesn't have administrative borders and all within a few meters from each other, yet it feels like they are two separate entities of the city. It only blurs when they converge in the plaza complex of the city--no tourists, no locals, just people wandering around and doing their own thing.

And it is this interesting facet of change, familiarity, heritage, and sense of place took our interest in our study.

For now, let me do my review of related literature, and its just the beginning.
Labels: Geography history Ilocos Sur Philippines urban planning
Where is it: Vigan City, Ilocos Sur, Philippines