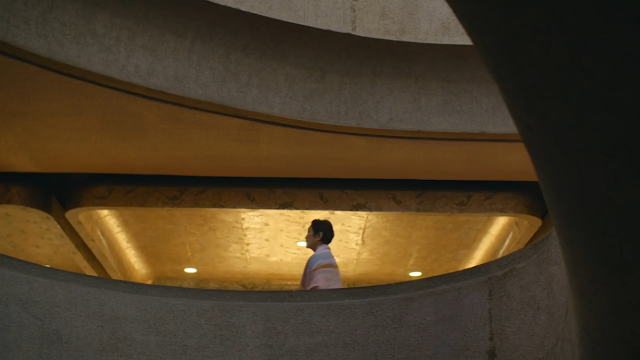 I have been to CCP’s main theater countless times, yet it is only now that I appreciate Lindy Locsin’s vision as an architect, through the lighting legacy of Hilado, his wife Tiya Rosky Balahadia Hilado's graceful dance, and music of Jugs and the rest of the band. The mash of visual, audio, and the story was harmonious and emotional. Nakakapanindig balahibo at maluha-luhang pag-aappreciate ng obra.

To quote the conversation of Tiya Rosky and Juno:

Stories, both personal and social, brings life to the otherwise bareness of space. In our cultural mapping activities, we placed "Stories Associated With" on sites which are deemed culturally or historically significant. Sa pamamagitan nito, not only we brought a lofty and otherwise devoid space a purpose, a meaning, but something that we can relate into.

Filipinos have a penchant of hugot and themes that relates to them socialy and personally. That is why I somehow appreciate how the video was executed with such harmony and beauty.

The CCP Main Theater perhaps may be one of Leandro Locsin's pinnacles in his design that made him an institution in Philippine architecture and bestowed the country's honor as a National Artist. However, if we add up the experiences, the stories behind the massiveness of the stone-washed theater, the lofty and imposing building beside Roxas Boulevard is something where we ordinary folks can relate to. Thank goodness for this video and CCP's annual event Pasinaya.

Places are oftentimes our basis of our hugot. May naaalala tayo kapag nakikita, naamoy, at nararamdaman natin ang mga espasyong may kahulugan sa atin. Nagiging kasama ito sa kung ano man tayo ngayon, at kung ano na ang lugar na iyon. Nabibigyang buhay, sigla, at emosyon ang espasyo. This video is only one of the many stories of the CCP Main Theater and the place beside Roxas Boulevard.

***
The song was a grand price winner of PhilPop 2016, composed and written by Jazz Nicolas and Wally Acolola, and was performed by Itchyworms. The video was directed by Juno Oebanda and Paolo Abella, with the lighting done by one of Hilado's students Shakira Villa Symes. It is dedicated to Teodoro Hilado, the "Father of Philippine Theatrical Lighting," and the woman dancing towards the end of the movie was his widow, Rosky Balahadia Hilado (the younger Rosky in the video was performed by Karen Adea).

Kudos to the team! For someone who is working with the cultural sector, nakaka-proud at nakaka-appreciate ang mga ganitong obra.
Labels: architecture arts Asia Geography Manila Philippines placemaking
Where is it: Roxas Blvd, Pasay, 1000 Metro Manila, Philippines