How to Get in and Out of Mactan-Cebu Airport? 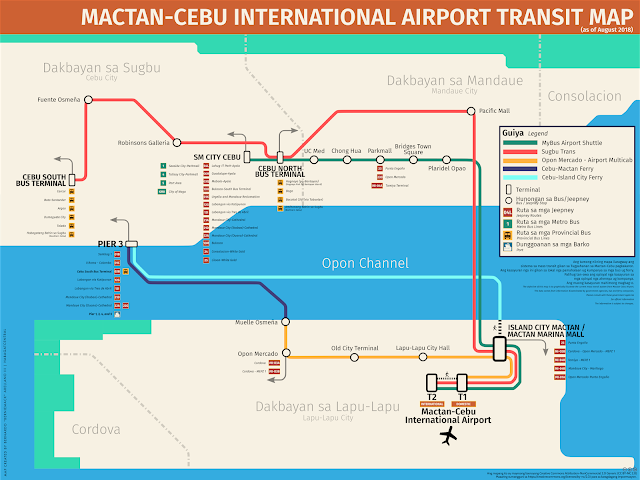 Considered as the second international gateway by most Filipinos and travelers alike, Mactan-Cebu International Airport is located some more or less 20 kilometers away from downtown Cebu City, but sits in metropolitan urban sprawl of today’s Queen City of the South. Cebu is noted for its increase in tourism arrivals, beaches, fiestas and the so-called urban-rural tropical island living that has been attracting thousands of visitors.


Mactan Airport was opened sometime during the Marcos era, when the old Lahug Airport in mainland Cebu (now Cebu IT Park) couldn’t be expanded anymore. The American military forces constructed the said airport as a secondary hub for Clark Air Base, after its utilization it was used by the public.


Now, since this is the second busiest airport in the country, shuttle services and taxicabs are not a problem in getting in or out of this airport. But for cash-strapped commuters, here’s what you can do.

And you may also download the high resolution image of the transit map as your reference in this link.

To meet the growing demand of passengers and ease of access transiting between mainland Cebu and the airport, airport bus services were recently introduced. There are two bus lines serving the Airport: MyBus bound for SM City Cebu, and Sugbu Tours bound for Cebu South Bus Terminal.

MyBus serves SM City Cebu to Airport route.
From SM City to the Airport, it has the following stops (vice-versa):
It takes more or less 30-45 minutes on light traffic, or about an hour or more during rush hour traffic.

It operates from 6AM to 9PM daily from SM City Cebu, and 7AM to 10PM daily from Mactan Airport. There are trips every 20 minutes.

You may visit MyBus Facebook page for more information.

Sugbo Tours, an affiliated tour of Vallacar-Ceres Bus Lines, serves Cebu South Bus Terminal to Airport. For passengers and commuters bound for uptown Cebu City and southern towns of the province, this is an ideal route.

It does not compete with MyBus as it has a different route with different stops (vice-versa):
Unlike MyBus, it does not have a scheduled track as of the moment.

Metro Cebu nowadays is struggling with traffic congestion. The narrow roads and increasing vehicles on the road had become one of the metropolis's greatest challenges. For commuters heading to the airport from the mainland, it is a test of patience, and often the two bridges that connect Mactan from the rest are usually congested.

Here is a tip on how to skip the traffic up, especially when you are coming from the southern part of the metropolis, and luckily we have now two options to do so:

Pier 3-Opon, or Cebu-Mactan Ferry, is an alternative from crossing the two bridges. With a 15-20 minute journey from coast-to-coast, it skips the gridlocks of Cebu City and most especially Mandaue.

This is an affordable and scenic way to transit.

Take note though, the line at the ferry terminals tend to get long during rush hours--like MRT-like proportions. So better go during off-peak hours.

From the City to the Airport


From Pier 3, you can board a ferry for PhP14 (adult) then disembark at Muelle Osmena. From there, you may need to look for the yellow multicab bound either for MEPZ-1, Punta Engano, or better yet directly to the Airport.

It shall cost you PhP10 more or less.

From the Airport to the City


Take the Opon Mercado yellow multicab at the South Wing Entrance of Terminal 1. For PhP10, more or less, it shall bring you to old Lapu-Lapu City poblacion. You may have to walk towards Muelle Osmena as sometimes these multicabs do not enter the area. Ask people where the port is and they'll be glad to help you up.

From Muelle Osmena, take the Cebu-Mactan Ferry, for PhP14 to Pier 3.

Upon arrival at Pier 3, there are several jeepney routes bound for downtown Cebu City.

Just last week, the Island Express ferry opened up operations between Pier 3 in mainland Cebu City and to Island City Mactan in Barangay Ibo, Lapu-Lapu City. For locals, the vicinity of Island City Mactan is near the older Mactan Marina Mall--the gateway to the airport.


The 30-40 minute travel from Pier 3 skips even Muelle Osmena, making it the most ideal connection for those bound for the airport and vice versa.

From the city, take the ferry at Pier 3. Upon arrival at the mall, walk towards Mactan Marina Mall and look for the multicab going to the airport.

For those from the airport, you can take the Opon Mercado yellow multicab. However, disembark at Mactan Marina Mall and walk towards Island City Mactan. From there, you can take the ferry to Pier 3 in downtown Cebu City.

I should try this soon.


Are there more routes on how to get in and out of Mactan Airport? Feel free to share your thoughts below. Do remember that prices here are subject to changes.