The Filipino Spirit is "Resilient" or is it an Excuse for Mediocrity? 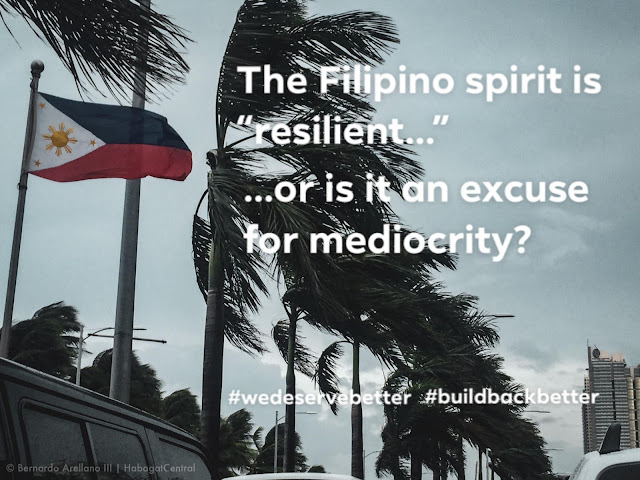 “Resilience” or “katatagan” is the word that describes the “image of the Filipino people” in times of adversity. Often, traditional and social media depict us as a bunch of people smiling amid the face of adversity. It somehow fosters a national image of a strong nation--the one that bounces back quickly with a joke and a smile as his or her weapon. Seeing this somehow uplifts the spirit and hopeful that life is normal, or shall resume normally soon.

However, this “resilience” has also been contentious. People tend to dismiss adversities as something we should deal with everyday. Since we’re “resilient,” we often brush off risks in an advent of another event, and would do the same thing “over and over.” If you complain about the inconveniences, people would often see you as negative and a pessimist—not helping uplift the spirit and the society needed in these tough times. The image of “resiliency” being played over and over again seems to border “insanity” — doing the same thing while expecting a different result. Also, it has that flair of fatalism—“wala na tayong magagawa.” Dahil sanay naman daw tayo sa mga delubyo, “we should deal with it.”

Situated in the Pacific Ring of Fire and on Western Pacific, our country is faced by a lot of natural phenomenon like earthquakes, typhoons, volcanic eruptions, monsoon rains, flooding, fire, drought, and name all those "disasters" in the world except those with snow. In World Risk Report 2017, the Philippines ranks Top 3 in Exposure and Risk from these "disasters."

In our classes in Disaster Risk Reduction Management (DRRM), the term, Filipino or English, is a source of contention and controversy. While resilience is a noble word, it is also subject to scrutiny as to what does it mean to the society's ability to bring back the sense of normalcy and improving itself. Some DRR managers, both from hazard and vulnerability schools of thought, are “allergic” to the said term.

Why do our transport system, our roads, and our economic and social lives tend to break down or disrupted even on smallest of thunderstorms? Are we really resilient?

Merrian-Webster defines that word as “an ability to recover from or adjust easily to misfortune or change,” and “the capability of a strained body to recover its size and shape after deformation caused by compressive stress.” While there is a term “recover,” in DRR, there is also a concept called “build back better” or BBB.

UNISDR (United Nations Office for Disaster Risk Reduction) defines it as “the use of recovery, rehabilitation, and reconstruction phases after a disaster to increase ‘resilience’ of nations and communities through integrating DRR measures into the restoration of physical infra and societal systems, and into revitalization of livelihoods, economies, and the environment.” In other words, we learn from the events in order for us to be “more resilient.” In my opinion, that “resilience” is something that we are able to adapt while improving our policies and infrastructure. There is the word “improving.”

Going back, the “resilient” narrative seems to have been overplayed and overemphasized. There is this “unwritten rule” that “we shall get back,” yet it gives an impression that since we are so used to it, not much should be done since “we’re used to it anyway.” We often go with band aid solutions—infra and policies--that only last for one administration. Is this brand of katatagan an excuse to mediocrity? Is this “heritage of smallness” or “tingi-tingi” mentality (pasintabi sa Pambansang Alagad ng Sining na si Nick Joaquin) stunting or slowing the foster of “building back better” culture in our Filipino society?

Our experience does not mean we have not been learning. Steps to "build back better" has been gradually incorporated gradually through our policies and infrastructure. The NDRRMC Rainfall warning Emergency Alert System is one. Project NOAH is another, and other efforts in educating and discussing on how do we make ourselves better. In the Department of Interior and Local Government's Seal of Good Local Governance, Disaster Risk Reduction or Mitigation is one of the assessment criteria for local government units--a measurement and encouraging policy in fostering a culture of DRRM. These measures are often silently working on the background, amid the noise of information bombardment on traditional or social media.

There is more to being "matatag" than just joking around on floods.

Despite the development, we have still yet to improve even further.


The Filipino society is indeed “resilient,” but it should be accompanied by “building back better.” It is okay to smile or laugh it out during times of crisis, when it is our way to adapt. Somehow we understand. However, we should take the lessons of disasters with passion and learning, and building ourselves better from there--not just in the next few months, or years, but beyond our lifetimes.


True “resilience,” we believe, is not just about smiling in front of adversity, but triumphantly improving ourselves physically and socially—a better Filipino nation that faces adversity, not foolishly, as “the better one.”
Labels: Asia Culture and Heritage disaster DRRM Philippines