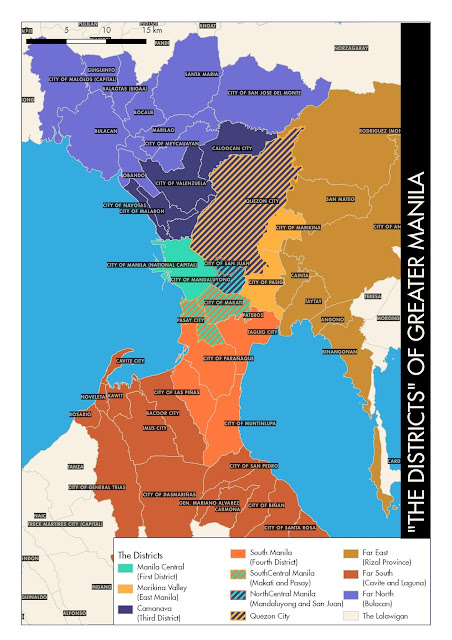 Last year, our social media was abuzz with "where is the middle point" for those who would like to meet up in Metro Manila. We also discussed how in the last four decades since Metropolitan Manila was created by the Marcos Administration urbanization expanded beyond its borders and into the surrounding provinces. Now that we are facing a community quarantine which gave consideration to those who are residents of the suburbs like Cavite, Laguna, Rizal, and Bulacan that commute everyday for work, confusion abounds. My thoughts is that we should change our mindset on how we see Metropolitan Manila. Here are some of my thoughts that was derived from last night's Facebook post.


With all the confusion about the community quarantine of Metro Manila, I think it is time that we see this urban center not only the National Capital Region that we know of, but including the greater area that includes its suburbs found in the Provinces of Cavite, Laguna, Rizal, and Bulacan.

Back in the 1970s, when Metro Manila was formed, much of its fringes like Las Piñas, Muntinlupa, Valenzuela had that suburban feel like what we see now on the provinces. Cavite, Laguna, and Rizal were much rural at that time. However, as time progresses, urbanization expanded beyond the borders of the National Capital Region and became an urban sprawl.

Today, a lot of suburban residents commute daily from Cavite, Laguna, Rizal, and Bulacan towards Metropolitan Manila to work which is grappled by inefficient mass public transport system and traffic jams. The subs depend on the core, the core depends on the subs. It is like how the ili of the Ilocanos depend on the harvests of the aw-away, and vice versa; or how the poblaciones or town centers compliment that of barrios.

via GIPHY (Metro Manila from 1988 to 2016, imagery from Landsat and Google Earth)

And now that this community quarantine is coming, the thought of thinking only of NCR and not of its surrounding provinces has bigger implications on how effective the limit of movement it will be. I’m not saying that subs should be included but policy makers and local and national administrators should see the bigger picture: viruses do not know borders, and so is earning for a living and an expanding population.

I think we need to think and act not as Metropolitan Manila and surrounding provinces alone, but as one Greater Manila Area, where 20 or so million are living, working, breathing—one of the world’s largest and densest urban conglomerations. This goes beyond the #COVID_19 quarantines, but also on urban planning and development.

via GIPHY (South Greater Manila Area: Cavite and Laguna from 1988 to 2016, Google Earth and Landsat)

Include Cavite, Laguna, Rizal, and Bulacan in intense coordination (if not expand community quarantine) and on other policies that affect Metropolitan Manila. We need to remember that the borders that were drawn by Marcos administration is already around 40 years old and the urban expansion has gone beyond its current borders. No longer the City of Manila is the center of trade and commerce as central business districts have moved towards the fringes of the metro like Alabang (where Research Institute for Tropical Medicine, or RITM is located), Makati, Eastwood, BGC, and Quezon City. I think there is a need for a change in how we think about "Metropolitan Manila" is.

Like how we study history, we need context. The surrounding suburbs are part of that context.
Labels: DRRM Geography Manila Philippines urban planning
Where is it: Metro Manila, Philippines