It was Day 2 of our free time in Hong Kong. After the conferences, eating, and going around urban spaces, we thought it was time for us to get back into shape. Clara, a friend of mine, thought of hiking the famed “Peak” of the city, where you can get the best panoramic view of the Victoria Harbour, Central District, Wan Chai, Kowloon, and beyond. Sure, it sounded “maturistia” or touristy, but after seeing the Tram lines looking like morning rush hour in Manila’s MRT, then we opt to do something a bit unorthodox – walk and climb all the way through the Old Peak Road.

6AM, and it was drizzling while the sun peeked through the clouds. We took the Metro to Hong Kong Station and decided to start our early morning “ascent” from the heart of the city’s Central District.
As we were making through Central District’s maze of streets, we couldn’t help but notice that when it’s 6AM in HKG, it is still waking up. Unlike in suburban Manila wherein it’s already frantic that early, the city’s downtown streets were amazingly quiet. The drizzle and the sun are making everything magical and fresh.
Among the modern day dazzling skyscrapers that shadow the streets below are some of old, heritage buildings that still stand the test of dynamic capitalist environment it cherishes. At six in the morning, it looks as if these buildings are still in a slumber.

The moment we went up to Wyndham Street and saw the heritage building of the Foreign Correspondent’s Building, we knew we were up to a challenge (or I was up for a challenge, not my colleagues, haha!). Victoria Peak’s slope is pretty steep as it rises almost abruptly behind the harbour and the city’s skyline. Ihanda ang hininga!
We went through the Albert Path, had a glimpse of the colonial era Government House, once the residence of British governors in Hong Kong. A few more old buildings line up Upper Albert Road like the Ridley House and the Church Guest House.
Paakyat pa more as we crossed the road and had a long ascent at Albany Road, through Hong Kong’s Botanical Garden. The chirping birds were welcoming and the temperature was just enough to have a…medyo pleasant ascent. <gasps air> Sandali lang, guys! Hintay. <hingal>
It was only a few meters, but it took me more than 15 minutes to walk uphill through Albany Road. By the time we crossed Robinson Road, it’s Stage 3 of our ascent – Old Peak Road. <hingal>

The road spans from Robinson Road at the foothills of the peak, to Victoria Peak itself. It’s believed to be the old route from the city center to the Peak, when the Tram hasn’t existed yet. I could just imagine the foreigners going up to the mountain to have a breather from the noise of the old city.
The first few meters of the road already gave us (or ako lang siguro) a challenge of scaling the mountain. It was steep. Residents from the high rise condominiums along the way were having their morning exercise routine – jog and walk.
Interestingly, we encountered a lot of our kababayans along the way, walking with the dogs of their amo as an exercise. Masaya naman that along the way, we were able to speak with our kababayans in this part of Hong Kong.
A few meters up, I was already slowing down. I was gasping for air while my colleagues were just having an easy time climbing. Senyales na kelangan ko na talaga magwork out ng seryosohan.
Then, it was the jungle.

Rainforest in the Middle of the City

Halfway on the Old Peak Road, it becomes a paved pedestrian or bicycle trail. Off limits na ang mga sasakyan. Along with it, the streetscape suddenly changed from an urban residential district to a more natural, tree canopied walk. Birds here were chirping even louder and the rumble of the urban streets fade away amid the sea of greens.
Pero, <hingal> mehn it’s getting steeper!
“Ano ba yan! Buti pa si angkong nakakaakyat na walang problema. Ikaw hirap na,” said my colleagues while an old man just overtook me on our way up. Nakakahiya, nakakatawa!
More work outs please!
Along the way, we met more kababayans. They probably found out we were Filipinos since Stephen was wearing a t-shirt with Andres Bonifacio’s face printed on it. “Malayo pa ba?” I asked one of our kababayans. She just came from the Peak after a walk with her dog and was chuckling with my gasping face. “Mga pitong bundok pa bago mo marating yun!” she said jokingly. I told, “buti pa kayo at ang kasama nyong aso hindi napapagod.” She said, “Eh sa malapit lang kami nakatira. Sanay na rin kaming akyat baba dito.”
After the short talk, we took off again. It went steeper and steeper as we draw close to The Peak. We made a few more stops before we had our glimpse of Hong Kong’s skyline from the trail. Ganda! Amid the urban background of the city’s skyline, the big, green leaves of the forest provide an interesting contrast of a city.
Konting kembot na lang, malapit na!

We finally saw the Tram’s tracks along the way. We’re now closer to our destination. A few meters up, we saw a heritage building perched at the ridge of the landmark structure of “The Peak.” And yes, up above us, that iconic landmark building.
At last! We have reached The Peak!!! It was 8:30AM, an hour and a half after we started our ascent. It was only a 3.3 kilometre route, but it took us a while to reach our destination as we appreciate the local beauty of Hong Kong, beyond its touristy side (or was it my excuse too that it took as a long time dahil hingal na hingal.)
No matter how tiring the workout, it was worth the walk. I bet we burned a lot of calories going up here, and saved HK$40 for heading here.

We gave in. We simply have to try the Tram going back to the city. It was also an adventure of its own, though. Still, it was a feat walking up there! :p 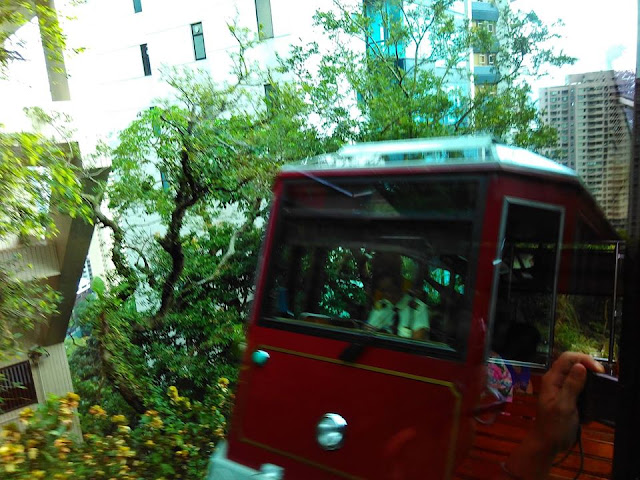 (This was originally posted on my personal Facebook account on 24 June 2016)
Labels: city Hong Kong
Where is it: Victoria Peak, The Peak, Hong Kong