Historical Sites with Significance to Philippines at Hong Kong 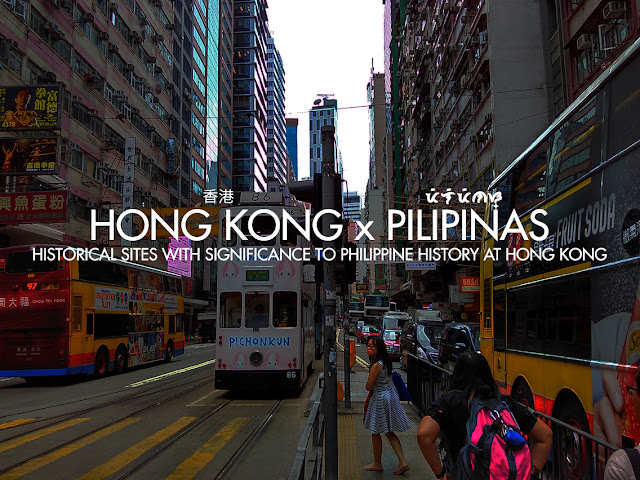 Hong Kong, no doubt, has been one of the most visited or preferred destinations for most Filipinos. That is manifested by the large number of flights between the country and the city (well, before Covid-19) and the vast number of Overseas Filipino Workers working on either blue or white-collar jobs. Filipinos have been a main staple in Hong Kong society, which its presence is felt every Sunday at Central.

While it is a foreign land, this city no doubt has a significant in the Philippine History, or Kasaysayan, that created “Asia’s First Republic.” Back in the 19th century, when it was still a British colony, Filipinos have visited the city—either employment, business, in transit, or sought refuge—something that is still clearly manifests today. In other words, Hong Kong and Philippines’ relationship runs deep.

There are three places in Hong Kong, in Central and Wan Chai, that are significant to Filipino history that has been marked by the Hong Kong Antiquities and Monuments Office, two of these revolve around the life of Jose Rizal, and the other where the Philippine flag came to be.

Jose Rizal arrived at Hong Kong on board Melbourne on 19 November 1891, returning from Europe. It was there where he met up with his family after the “Calamba Incident” and the second arrest of his mother, Doña Teodora Alonso. According to Austin Coates, one of Rizal’s biographers, “The family was full of praise for the British Government. They noticed everything.” (Coates, 1992, p. 213). Leon Maria Guerrero also noted contentment with Rizal’s family upon arriving and settling in Hong Kong in his letter to Blumentritt (Guerrero, 1974, pp. 304-305):

“We are all living here together," Rizal wrote Blumentritt happily, "my parents, my sisters, and my brother, all at peace, far from the persecutions they suffered in the Philippines. They are very happy with the English Government; they remark everything and, in many of the comparisons they make, they find many things which I could not h,ave observed. My father is even more uncompromising in his judgments; he says: 'I want to die here; I don’t want to go home anymore; life there is unbearable.”

Rizal settled down at Rednaxela Terrace, to which according to him, is “300 feet above sea level on the steepest slopes of the Peak mostly occupied by Portuguese families, originally from Macao."

He opened his clinic at D’Aguilar Street where he said to be known as “The Spanish Doctor” according to Coates.

It was said that Rizal met his future “wife” Josephine Bracken here. Bracken, a Caucasian of Irish descent, lived in Hong Kong. It was said that she, or her mother, was buried here, somewhere in Happy Valley Cemetery—that is one of the city’s oldest and largest cemeteries. We have no time for tomb seeking at that time as it is like finding a needle in a haystack.

Pepe, Rizal’s nickname, was not really joking about “steep slopes.” In 2015, we tried to visit the three markers and starting from his residence at Rednaxela Terrace somewhere in the Central Mid-Levels, after our seminar workshop at HKU. It was a challenging search that humid August afternoon.

After taking a double-decker bus, we dropped off at Castle Road Bus Stop and traversed the steep pedestrianized Peel Street. Rednaxela is not a famous street in Hong Kong unlike Hollywood or Nathan Road and Rizal’s residence was not clearly marked on Google Maps!

After that exhausting hike, we finally reached Rednaxela. Unassuming, an Antiquities and Monuments Marker was placed where Rizal once resided together with his family. No longer having that view of the sea, it is now an unassuming apartment. Later we found out that there was a Central-Mid Levels Escalator nearby.

After that exhausting climb up to Rednaxela Terrace, we went downhill to site of Rizal’s clinic at D’Aguilar Street. We took note that this place is nearby Lan Kwai Fong, known for one of Hong Kong’s “booze street,” lined up with bars, restaurants, and commercial shops. When Rizal’s residence was a challenging find, wait till you get to D’Aguilar.

Finding the red marker of the Antiquities Office was not easy. The area was busy, full of signs. We only had context clues using photos of previous visits by bloggers. We went up and down the street. It was busy! Probably it was also like that back then, no?

After going up and down, we thought of giving up. Then, at a shop at Century Square Building, we found the illusive marker! Just below a Starbucks shop!

Onto our next destination: Morrison Hill.

One of the outcomes of the Pact of Biak na Bato was Aguinaldo’s exile to Hong Kong in December 1897 and formed the so-called “Hong Kong Junta.” In preparation for the second phase of the Philippine Revolution, he was said to have designed a flag that would be sewn by Doña Marcelo Mariña Agoncillo with her daughter Lorenza and Rizal’s niece Delfina Herbosa Natividad at their home at 535 Morrison Hill Road. (Arevalo, 2012)

Agoncillo was said to have delivered the flag to Aguinaldo when he was about to return to the Philippines. It would be unfurled in the Philippines for the first time after the victory at Alapan, Imus on  28 May 1898.

535 Morrison Hill Road. Thank goodness the road still exits, but like everything in Hong Kong—the 19th century urban layout has been drastically changed by development. Even Morrison Hill itself, once a hill, is no more.

Somewhere at the Morrison Hill Playground

Morisson Hill was in Wan Chai, so we need to take a break, eat and took a tram at Hennessy Road. A short walk, we were greeted by a masjid at Morisson Hill. As we searched for the place where the Philippine flag was conceived, it was harder than we thought. The 535 Morrison Hill Road turned out to be one of those commercial-residential skyscrapers with no Antiquities Marker in sight! We went to Queen Elizabeth Stadium nearby, thinking the marker might be there—there was none!

After going around the park that humid afternoon, we took a rest at the playground at Morrison Hill. Then suddenly, a colleague of mine called our attention: “Andito yung marker!” Lo and behold! The marker that marks the vicinity of one of the Philippines’ most sacred symbol—its flag.

The text in the marker states:

“In May 1898, in this vicinity, the first Philippine national flag was sewn by hand by Doña Marcela Agoncillo, wife of Felipe Agoncillo, the first Filipino diplomat, assisted by her daughter Lorenza and Mrs. Delfina Herbosa Natividad, niece of Philippine national hero Dr. Jose Rizal. This flag, which became the rallying symbol of unity for the Filipino people during the Philippine revolution, was officially unfurled during the proclamation of Philippine independence on June 12, 1898 in Kawit, Cavite.

This marker is installed to commemorate the historical role of Hong Kong in the Filipino people’s struggle for independence.”

While it is not the exact place where the flag was first sewn, at least we know that somewhere there, amid the skyscrapers, was where our flag was conceived.

These three sites in Hong Kong, while only marked by a red marker and were hard to find, have significant roles in the national history and culture of the Philippines, especially during the 19th century and upon the establishment of Asia’s First Republic. Even up to now, Hong Kong and the Philippines has deeply connected ties that run from cultural, to political, to social, and even historical. There is more to Hong Kong and the Filipinos than meets the eye.

And searching for those sites around Central and Wan Chai gives you a more immersed travel in Hong Kong.

Arevalo, C. R. (2012, September 6). National Historical Commission of the Philippines. Retrieved from The Philippine Flag: Symbol of our Sovereignty and Solidarity: http://nhcp.gov.ph/the-philippine-flag-symbol-of-our-sovereignty-and-solidarity/

Labels: Culture and Heritage history Hong Kong Rizal
Where is it: Hong Kong