At Home in Old Manila: A Lunch at Senator Eva Kalaw’s Home in Sampaloc 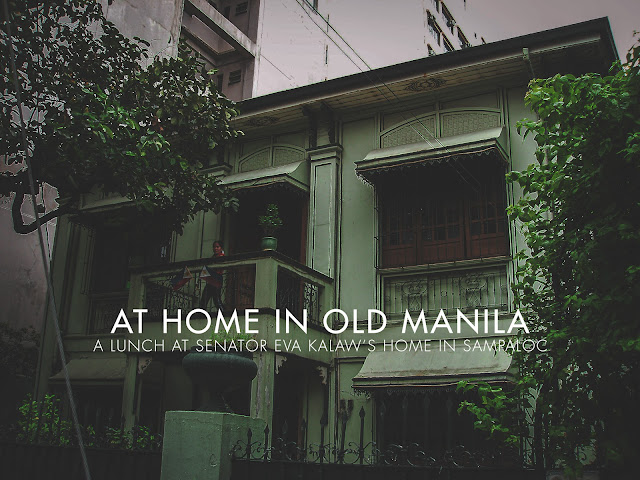 It was 2008 when I was still a part-time researcher for the inventory of old homes and buildings in Manila for Ateneo’s project, together with HCS member Jeffery Yap. One of the homes on our Sampaloc inventory was a green two-storey house located in Lepanto Street (now S. Loyola). Amidst the colossal buildings that surround it, the petite home still maintains its suburban feel. When we knocked the gates and asked for an interview, it wasn’t just an ordinary person who welcomed us. It was former Senator Eva Estrada-Kalaw–unexpectedly.
Mrs. Estrada-Kalaw accommodated us as visitors. We explained that this inventory we were doing was to record the remaining heritage sites in old Manila. She smiled and she was happy for it and gave a tour of her humble adobe.
Mrs. Eva Estrada-Kalaw was a former senator during the early days of the Marcos administration (1965-1972) and is a native of Concepción, Tarlac Province. Born in 1920, she earned her degree in the University of the Philippines in 1940 and became part of the academe before entering politics. She once belonged to Partido Nacionalista but later switched sides to Partido Liberal in 1971. She was one of the victims of Plaza Miranda bombing. She was an instrumental opposition figure that led to the People Power Revolution by 1986.
By the time we visited her, we never felt any “aura” that she was a former politician herself. She was simple and very reminiscent of the days of her youth.
It was noon, and the sudden downpour has left us stranded at her home. It was nice that she toured us in her home. According to her, the house was built by her father in the 1920s, made of stone and wood. It still maintains the original tiles, ceiling, ventanillas, and a lot more. It is a heritage home indeed full of carvings and antiques. And despite Sampaloc district swallowed whole by the urban jungle, her home still maintains its tranquility. Well maintained and there were only a few minor modifications done in this quaint home in the middle of chaotic Manila. She said that it rarely floods in Lepanto, unlike the neighboring España Boulevard.
Lunch time and we weren’t expecting that the former senator herself would be serving us some kare-kare for lunch! Serendipity I guess, since we weren’t even expecting at all.
After more chit-chats, it’s time for us to go. We thanked her for so much information provided for our inventory, the lunch and of course the warm accommodation.
Like anything else in urban Manila, not all heritage sites have deteriorated. This one, a heirloom of Former Senator Eva Estrada-Kalaw, was maintained by the owner herself, even though if it looks like an anomaly in a streetscape now full of concrete buildings. A part of her family heritage, and a part of Manila’s glorious history as “The Queen City of the Pacific” in its heydays.

This blog post was originally posted on 10 March 2012 at HabagatCentral. The actual interview/interaction was on 27 July 2008 at her residence in Sampaloc, Manila. She passed away on 25 May 2017 at the age of 96. I am very surprised that the photos of her, her home, and her warm accommodation was kept intact, yet I am very much surprised how she fought tyranny back in her day.
Labels: architecture Culture and Heritage history Manila Metro Manila Philippines
Where is it: S.H.loyola St, Sampaloc, Manila, 1008 Metro Manila, Philippines