BPS Building and Sciencia: Alabang's Icon and Beacon of Hope 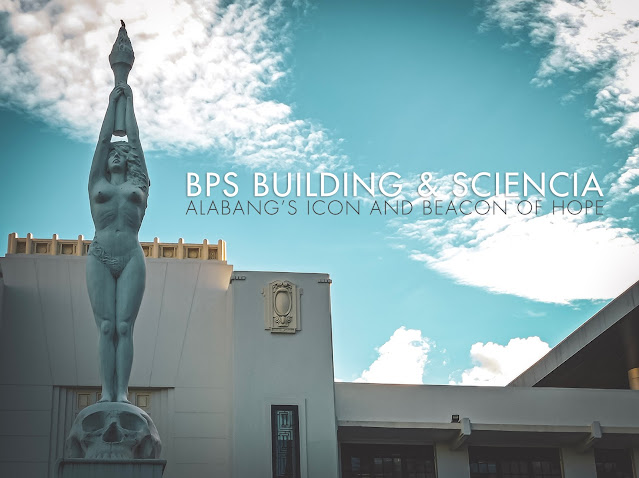 Back in the 1990s, Alabang for me was already a frontier. It may be a terminus for south-bound buses but what is now Filinvest City Central Business District was just a vast and empty grassland with few buildings, one of which was a seemingly abandoned building with a creepy statue in front of it. Back then, I had an impression it is haunted. Not only it looks old, but that monument in front of it has a skull! My young mind could not only comprehend that its darkness and death. It scared the heck out of me that even when I was in high school, I try not to look onto this building! This was my first impression of the Biological Production Services Building (BPS) and the Sciencia Monument in Alabang, Muntinlupa City.
It took me more than a decade to see that building and monument once again--saved from the wrecking ball. Now, I experienced it with a whole new set of fresh eyes of appreciating heritage conservation and within the context of times--as a beacon of hope.

The building was once the Biological Production Services (BPS) Building. It was constructed in the early 1920s, as part of the vast 110-hectare Alabang Serum and Vaccine Laboratories (ASVL). Its purpose was to produce and store vaccines and sera. It was once under the Bureau of Science, which was later transferred to the University of the Philippines in 1936.
According to heritage architect Manolo Noche, in an Inquirer article dated 10 August 2013, it may be designed by renowned architects Juan Arellano or National Artist Juan Nakpil:

Its role in Philippine public health was important enough that during World War II, then-President Sergio Osmeña appropriated funds through Executive Order No. 43 to:

WHEREAS, whatever balance remaining in the Revolving Fund of the Alabang Laboratories created under Commonwealth Act No. 245 had disappeared or has now become worthless as a result of Japanese occupation; and

WHEREAS, it is deemed imperative to continue the activities of this institution to meet the need for vaccines and sera to prevent any possible outbreak of epidemics in the country;

It enjoyed international renown as a research facility all up to the 1970s.
Decades later, BPS transferred and absorbed with the Research Institute for Tropical Medicine (RITM) just around a kilometer south. The organization became Biologicals Manufacturing Division and still carried on its original purpose.
The building was left abandoned for a few years. I guess that is why it gave me the first creepy impression back then. Thankfully, the real estate developer, Filinvest, decided to do an adaptive reuse and incorporate it in the expansion of its largest mall, Festival Mall.
No longer creepy, it stands dignified and clean. Though the building itself has changed purpose, its history and symbolic significance in public health remains.

Yet, what is with that monument in front of it?

The monument in front of the BPS Building, the lady holding the torch up high while stepping/trampling down a skull is known as "Sciencia," or "Triumph of Knowledge over Death." The monument was based on the clay figurine created by Jose Rizal as a gift to his friend and anthropologist Ferdinand Blumentritt. It depicted a naked lady bearing a torch of knowledge and stepping on a skull depicting death or ignorance.
I had an earlier article regarding this here.

Another one is located at UP Manila, connecting its heritage as an institution that was once under the university.

Back then, it was creepy because it had overgrown grasses and it was placed in the dark corner of Alabang. Nowadays, it is bathed with light and well-trimmed landscape. The skull is an effective memento mori or a reminder of humanity's mortality, yet amid all of these we shall overcome through the guidance of knowledge and wisdom.

That is why I reaffirm my belief that history books may not enough to remind of humanity's heritage, knowledge, and power. A tangible and visual reminder has to be incorporated on the landscape to effectively remind the people or learn our lesson as a society.

Beacon of Hope Amid this Pandemic

What made this building and monument so profound nowadays is that the role of BPS, now under DOH-RITM as Biologicals Manufacturing Division (BMD), in production and storage of certain vaccines such as those used in influenza, pneumococcal, rabies, and Hepa-B. In the (near) future, perhaps even vaccine against coronavirus too?
The mother institution, RITM, was the only Covid-19 testing laboratory at the beginning of the pandemic this year, and still is playing a significant role in testing cases of the said disease.

The monument’s symbolism and the conservation efforts of the BPS Building brings a sense of hope in what we are facing now as a global pandemic and confusion. May these tangible heritages reminds us to go padayon-pahuway-padayon! (We go! We rest! We go on!) Hope lingers as it should be guided by knowledge and wisdom that we learn amid this global challenge.

Republic of the Philippines. (1945, May 28). Official Gazette. Retrieved from Executive Order No. 43, s. 1945: Appropriating Funds for The Operating Expenses Of The Alabang Laboratories For The Period From February 27 To June 30, 1945: https://www.officialgazette.gov.ph/1945/05/28/executive-order-no-43-s-1945/
Labels: Culture and Heritage Metro Manila Philippines
Where is it: Commerce Avenue Filinvest Corporate City, Alabang, Muntinlupa, Metro Manila, Philippines