Can Durian Grow Beyond Mindanao? 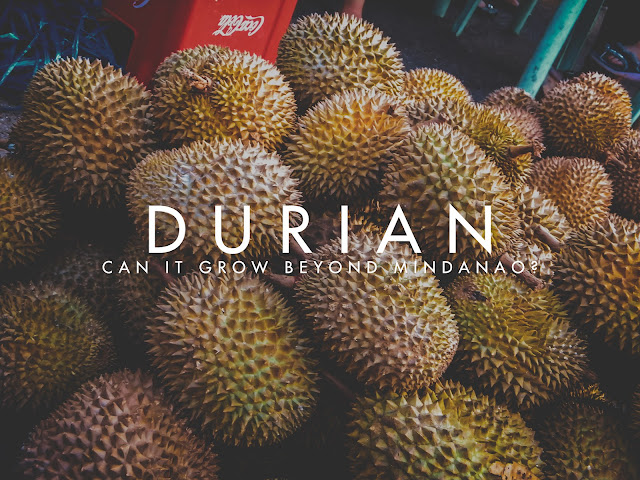 Durian, the majestic "King of Fruits." Well-loved and well-respected for its patrons (like I do), loathed and cursed by its detractors. Its characteristic aroma (not odour) and flavour has fascinated and repulsed people from all corners of the globe. In Southeast Asia, it is sold on streets as fruits, pulp, candy, or to the extreme--durian pizza. Durio zibenthus, its scientific name, was once described by British naturalist Alfred Russel-Wallace in his journey in Asia.
In the Philippines, durian is often associated with Mindanao, where most of the production comes from. However,  my recent move to Laguna had me bought several kilos of durian in 2019--particularly at the foothills of Makiling where I can buy PhP50-PhP80 per kilo. It made us thought if we can plant durian beyond Mindanao. Because of our love with durian, we made a short research paper in our Biogeography class at grad school, on where in the Philippines can we grow durian.

The native range of durian spans over Indonesia, Malaysia, Brunei, and even Thailand and here in the Philippines. However, its distribution as an economic crop in the Philippines comes mostly from the Island of Mindanao, within the vicinity of Borneo. As to how durian came in Mindanao or Sulu is still subject to further research, but given its vicinity within its native range, most likely it may have been brought either through human intervention or may have been carried by natural causes.
Philippine Statistics Authority (PSA) has noted that more than 16,000 hectares of land in the country are devoted to the plantation of durian in 2016. 50 percent of it comes from Davao Region. Agusan del Sur has the largest durian plantation outside of Davao followed by Cotabato Province. Even Sulu has around 700 hectares. Davao City is the country's largest producer of durian in 2016.
Production of durian outside Mindanao pales in comparison. Western Visayas accounts the largest outside Mindanao with almost 170 hectares in total with Negros Occidental and Iloilo's production combined.
Surprisingly, the government statistics agency has noted production in Luzon. Particularly in Laguna, Aurora, Ilocos Sur, and Nueva Vizcaya--far beyond the "traditional" range. We even remember Oriental Mindoro having that too. That means, planting that ooh so loving fruit can get closer to Manila--wherein they sell durian to almost PhP200 to PhP400 per kilo!

Finding the Suitable Place to Grow

There have been recommendations on where to grow durian. Why is it Mindanao is "the king" of durian production? We made some studies and here are some of the ideal requirements of planting and growing durian:
With these in mind, we made some analysis using Geographical Information System (GIS) through raster and visual overlay analysis using available data from Shuttle Radar Topography Mission (SRTM) DEM map from NASA, or the slope and elevation of the terrain, from WorldClim’s Bioclimatic variables: annual mean temperature, annual precipitation, and precipitation variance, and PhilGiIS for the general soil map of the Philippines. (My laptop crashed several times because it could not compute the data with its limited processor and memory).

For the love of durian, we analyzed

After a lot of laptop crashes and sleepless nights, we were able to analyze the data based on the prescribed ideals for growing durian:
It was just a beginning to know more about our favourite fruit. While it still needs further study, analyzing the country's geological and climatological requirements is a tool where farmers can probably invest in planting durian.
Bottom line, to answer the question, yes. It can grow and propagate beyond Mindanao.
For the research paper, you may read further here:
https://www.researchgate.net/publication/325381622_Going_Beyond_The_Case_of_Durian_Industry_in_the_Philippines_and_Finding_Suitable_Areas_beyond_Mindanao_Island
This study was presented on the National Conference on Geographical Studies in 2018 (NCGS 2018) at University of the Philippines Diliman.

Philippine Statistics Authority. 2016. Other Crops: Area Planted/Harvested by Region and by Province, 1990-2016.

Hariyono, D., Ashari, S., Sulistyono, R., Aini, N.,2013. The Study of Climate and its Influence on the Flowering Period and the Plant’s Age on Harvest Time of Durian Plantation (Durio zibethinus Murr.) on Different Level of Altitude Area. Journal of Agriculture and Food Technology.