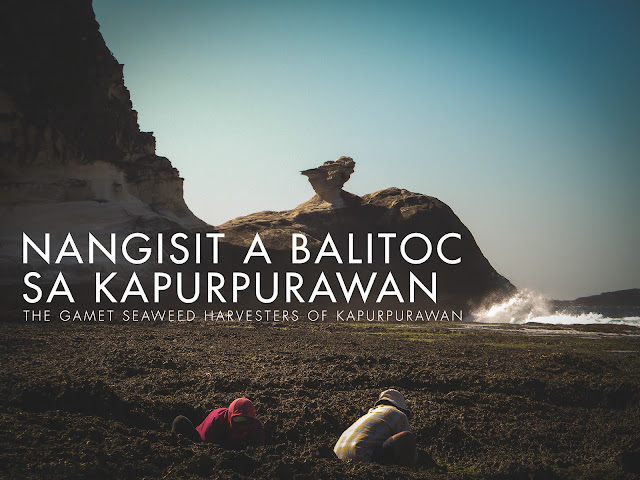 The cold and crisp air of the north hits the shores of Ilocos Norte with a gentle yet furious demeanour. As the waves of amihan crash at the rugged shores, strange mossy leftovers started to scatter around. In fact, they abound the rugged and rocky coast of Burgos town. Early in the morning, the residents started to pick these strange things from the rocks, not minding the crashing waves of the north—for these are worth of gold.
During the northeast monsoon months or amihan, seaweeds called “gamet” in Ilokano (Porphyra marcosii Cordero) are harvested in the rocky and rugged northern shores of Ilocos Norte and Cagayan. In the town of Burgos, residents along the coast earn a living in harvesting the seaweed which is a close relative of the famed Japanese nori seaweed (the one used to wrap sushi).

It was mid-afternoon when Manang and her colleagues were collecting seaweed near the now famed Kapurpurawan Rock. The sun was up and the skies were cloudless. Despite the seemingly harsh weather, the cool air of the sea kept them refreshed all day, picking up gamet in the crevices and rocks washed ashore by the northern waves.

“Kanina pa kami dito, kumukuha ng gamet,” ("We have been harvesting gamet here for quite a while now"), she said in Filipino.

Gamet is sold either fresh or dried in the market. For one small ganta (or small container or around quarter of a kilo), it costs around PhP200 in the town. In Ilocos Norte’s capital city Laoag, it’s already PhP400. Once it reaches Manila, it is already knocking on a thousand pesos.

In Ilocos, you cook it as an omelette or a simple soup with tomatoes and onions.

It is also noted to prevent goiter because it is rich in iodine.

“The seaweed only occurs during November to March, at the peak of amihan season,” Manang said in Filipino.

She added, “It’s difficult to harvest gamet, because we pick it up at the craggy shores while the waves crash fiercely.”

Like the swallow nests in El Nido, harvesters risk life and limb in picking these seaweeds. As waves crash in the rocky shores, some weren’t lucky coming back home alive, while others were carried away by the fearsome demeanour of the sea.

“Kaya di kayo magtataka kumbakit mahal ang gamet,” (Don’t wonder why gamet is very expensive) she said. Not only these are picked up on the rough rocks, but also you have the risked of being washed away by the sea.

Amid the bustle of tourist traffic coming in and out of Kapurpurawan, the harvesters kept picking up seaweed in order for them to sell these to tourists and merchants in the market.

“Dati, kami lang andito sa Kapurpurawan. Wala masyadong tao, tapos tahimik. Kung di pangingisda, kumukuha naman kami ng gamet pag season,” (Back then, we were the only people in Kapurpurawan. Not much people and it’s very peaceful. If not for fishing, we harvest gamet when it is in season) she told.

Kapurpurawan Rock (or simply “white rock” in Ilocano) recently became famous through the intensive promotion of the local government in Ilocos Norte. The white sandstone rock was naturally carved by the elements—especially the hard crashing waves of the north. It became a tourist attraction and a “must visit” for visitors.

One can simply fall in love with the beautiful yet rugged northern coastline surrounding the rock.

Of Giant Windmills and Nature’s Bounty in Burgos

And aside from it, giant windmills producing power dominate the skyline of the coast. Like the windmills that Don Quixote once thought were giant monsters, these giant wind turbines spin as amihan blows.

There are approximately 50 windmills in Burgos, several in the beaches of nearby Bangui, and several more in Pagudpud. The coastline is literally lined up with windmills that provide power in the Luzon grid, the renewable way.

Manang added, “Since Kapurpurawan Rock became famous, our neighbours have livelihood aside from gamet—from selling goods to tourists and workers at the power plant, to horse-back riding.”

“We welcome the development here in Burgos, if it means to help us prosper,” Manang told us while she was carrying her harvest of the day, heading home.

Her colleagues seem to have enough too and are now planning to go back to their homes, while the tourists keep on flocking in that windy afternoon.

The article was originally posted on HabagatCentral on 05 March 2015 as "The Gamet Seaweed Harvesters of Kapurpurawan."