Sinulog 2020: Celebration at the Eve of the Pandemic 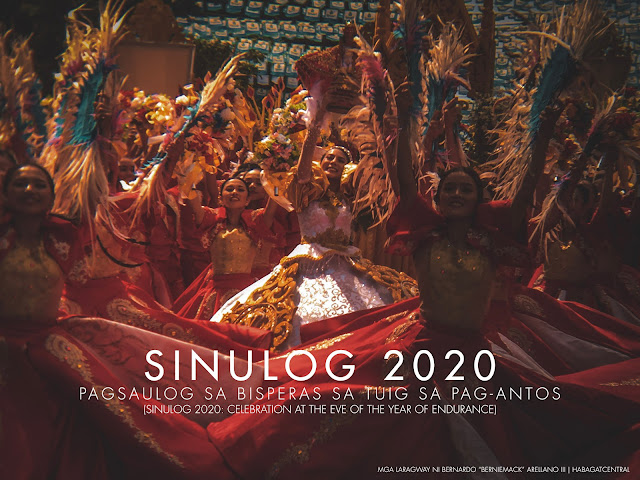 We planned for our return in Cebu for Sinulog for some time. I have not been here since 2014. My panata to Santo Niño was not fulfilled due to work, finances, and graduate school. Here is 2020, an opportune time for us to celebrate once more. I'm done with my graduate studies, a more stable work and schedule. Finally, it's a go for Sinulog 2020!
Together with my friend and fellow advocate Stephen, we head on to Cebu. However, things will not be going as planned. This year's celebration was nothing short of ominous. We never knew this would be the last time we will see a sea of people openly celebrating and professing their faith in the streets of Cebu City. For someone who has been to this annual revelry, it felt something off. Was it the news? Was it the flight? At that time, I was not sure.

Our new year started with a bang--literally. Taal Volcano erupted that January, a feat something I was not expecting within my lifetime. Flights to and from Manila were cancelled because of the volcanic ash spewed by the country's second most active volcano. I have bought my tickets already and boy was it expensive! While the major eruption waned as time passed by, we were not sure if it would erupt again.
The volcanic eruption was just the appetizer. The main course was lingering in the kitchen with its scent (or stench) stretching from Wuhan and across Asia. Beijing just issued a warning to the World Health Organization that an epidemic was happening in the Chinese mainland, and given that the Lunar New Year was near, the lingering thought that some of those who may be infected by then new disease was just around the corner.
Matutuloy pa ba ito? Against all of these odds, we pushed through. Stephen went first to Cebu and I followed over the weekend.

As part of my "tradition," I always buy a photographer's pass whenever possible. Expensive as it may, it was a front-seat view and experience with the Procession, the Parade, and everything in between. Taking photos of the festivities was something I love to do--be it may street dance or otherwise. (Reminds me of a good friend of mine, the late Enrico Dee of Byahilo.com. "Day, this is not the best year!")
Weeks before, I called the Sinulog Foundation and found out that the photographer's pass application was already done. What?! This is the first time that I won't take a pass in years! However, they suggested that I get a video contest pass. Same price, different deadline. And so I took it, submitted my application weeks before I head to Cebu and made sure Stepehen retrieves it since he'll be there first.
That didn't happen. For the first time, Stephen was not able to retrieve it on Friday, saying that "the one in charge was not there." Saturday came, I went to Abellana Sports Complex personally to retrieve it, only to find out that it was neither printed nor laminated. They lost the application somewhere. I was calm but somehow restless. This was the first time that the issuance of the pass was this...late. They were efficient back in the day. This year, they were not. It was past 1PM when we finally have it!
Later I found out that it was no longer Sinulog Foundation that was managing the entire festivity. It was a new entity and it was on its first year. Probably the first year kinks or adjustments. I'd prefer how the old foundation was somehow efficient, though.

I am particularly a late morning person. My gears start to function beyond 8AM. That means, foregoing the Fluvial Procession in the early morning--something that I have missed several times, even when I was still based in Cebu! So we took our chance in the Grand Procession that Saturday afternoon.
It started on time that afternoon, yet we were not able to enter the Basilica Minore grounds. It was already crowded. We just stayed somewhere in Plaza Sugbo, around Magellan's Cross. People from all directions were drawn towards the Basilica, the center of the festivities and the devotion to the Holy Child--a cherished cultural icon for the Cebuanos and the devotees.
Devotees flocked in multitude--adults, seniors, and children alike, along with their personal Santo Niño statues/statuettes, never minding the heat and humidity, which is also fairly unusual for a January in the Philippines. We didn't wait for the procession to start, we head to the Cathedral Museum and headed towards Colon Street, the country's oldest street.
From 2PM onwards, the procession was moving towards Calamba District, then towards Fuente and going back downtown. Some people who went ahead of the procession were already walking with their Niños. Some praying, others just...walking and talking. We decided to stay at the corner of Junquera and Colon Streets and wait. It was a frenzy of people from all walks of life. The gigantic speakers blared prayers, the rosary, the mysteries, and responses from different languages--Cebuano, Tagalog, Hiligaynon, Ilocano, Waray, and even Bahasa, Arabic, Korean, and Mandarin! And of course, the Gozo which became our LSS that day.
It was with the Gozo, or "Batobalani sa Gugma" (Magnet of Love) when the walking crowd starts to wave their hands in thanks and praise. Brought shivers to my spine. Walang kakupas-kupas!
It was around 4PM, after several santos have passed that the carriage where the image of Santo Niño de Cebu passed at our area. Devotees on the side waved and prayed. Chanted prayers of hope, some closed their eyes. There's tranquility amid all the crowd. Then as quickly it came, it was gone. The crowd behind it though was overwhelming!
We later found out that official estimates peg at around three million people converged in Cebu City for the procession and other associated activities.
We call it a day and head on to visit our friends at IT Park before heading home.
Some kinks that day but everything went well. For some, the eve of the Grand Parade is the true Sinulog. The procession, the Mass, and all. It was the Fiesta Señor.

Nothing much to write about it, as most of the stories have already been told. I'll let the photos speak about that day. However, I'd like to point out some interesting things that happened that day:
Stephen and I parted ways along Mango Avenue. I went south towards University of San Carlos-Main. The contingents of Pintaflores of San Carlos City (where I met Councilor PJ Maisog) of Negros Occidental, Carcar City in southern Cebu, and Sinanduloy Cultural Troupe of Tangub City were waiting for the parade to start. Under the heat of a January day, they waited. Some practiced their moves while others were dressing up. It was an opportunity to take photos with the celebrants albeit they are not dancing.
It was 10AM but it has not started yet. Traditionally, the grand parade starts after the Mass held at the Sports Complex. This time, it was late. Some of the dancers who routinely dance during the celebration were also getting impatient and hungry. I found out that President Duterte would be gracing the event and they are still waiting for the go-signal for the dancers. Personally, this is the first time I experienced the start of Sinulog Grand Parade late.
It was already noon time. I already ate my lunch, went back to Mango Avenue and transited back to San Carlos again. The contingents were not moving. The contingents have not moved since 9AM and some of them were already eating their packed lunch. Usually at this time, the grand parade halts for lunch break before proceeding to the afternoon sessions, to give some energy boost to the contingents that would dance for more or less five kilometers of the carousel route, plus a stage performance at the Sports Complex!
Then without a warning, they wrapped up their lunches so suddenly. They were moving, Finally, it was 12 noon and they started to dance!
Finally! Viva Pit Señor at noon time! It was my first time and that was kind of off.
Like what I did in the previous editions of the celebration, I went around the carousel route. But I'm getting older. I could not do that three circumnavigations that I did back in 2014. Haha! I enjoyed it and find it challenging to take photos using only my mobile phone. I was happy at that time that finally I get to hear those high-pitched bugle, drums, and Viva Pit Señor! Finally, my panata was somehow complete.
Before the crowd collapses, I went back to my dad's apartment in Cebu, took a rest before heading to the airport. Stephen remained in Cebu while I have to head back to Manila. Fortunately, Taal has no inkling of erupting at that time so no flight cancellation.

It would be the last time I saw the crowd close to each other, when social distancing was such a distant term. For a very dense city like Cebu, crowding is common--and during Sinulog it doubles. And so I flew back to Manila, only to find out several days later that the country's first COVID-19 case went to Cebu and Dumaguete as well.
Looking back at the photos nowadays is somehow surreal. Like an ode to a past that may be changed by the pandemic. We are distant from each other and I am not sure whether Sinulog or any other festivities will return by next year. I also forgot to mention that this year was the eve of the arrival of the Santo Niño de Cebu, 500 years ago. I am not sure how it will affect the quintessential commemoration of the Victory of Mactan and the Circumnavigation of Humanity.
As I wrote this blog post, finally Cebu City is downgraded to General Community Quarantine. Somehow, it may have triumphantly overcome the worst in this pandemic as its hospitals got overwhelmed sometime in June. While the battle is not over, it gave a sense of hope--a cautious hope that is, that we shall overcome this pandemic, that we shall celebrate again as One Voice, One Beat, One Dance--just the way it used to.
More photos here:
Labels: Asia Cebu Festival Quarantine Diaries
Where is it: Cebu City, Cebu, Philippines