Fort Pikit: A Lonely Fortress Up on a Hill 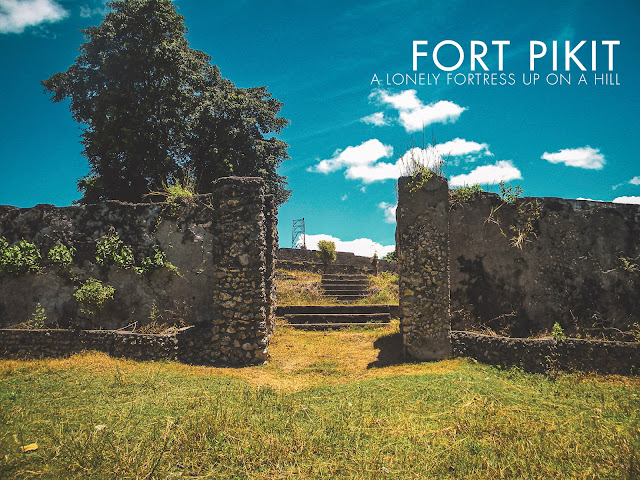 During the Spanish colonial era, trying all their might, but the Spanish conquistadores were not able to completely conquer the island of Mindanao--by trade or by force. Even during their twilight years, they tried but failed. It was one of the reasons that they established military garrisons in some areas like Fort Pilar in Zamboanga. Much of these fortresses, or fuerzas, are located besides the sea to guard the pueblos and barrios from marauding Moro raids that were frequent in Luzon and the Visayas. Fort Pikit, on the other hand, is way inland--in the middle of Mindanao.

Back in 2014, we had an opportunity to go back to my father's birth place in Cotabato and celebrate Talakudong Festival in Tacurong City. On the sides, we took the opportunity to head on to Fort Pikit after reading a blog post by well-known heritage conservationist and academic René B. Javellana on his Muog Wordpress. He made a book back in late 1990s called "Fortress of Empire" which surveyed and researched almost all of the fortresses and watchtowers that were constructed during the Spanish colonial period. Fort Pikit is just one of the very few fortresses established by the colonial government in a bid to conquer the heartland of the Maguindanao people.

That morning, we took a V-hire (shuttle van) from Tacurong heading to Kidapawan City, the capital of (North) Cotabato Province. Then from Kidapawan, we took a Weena bus heading to Cotabato City. It was a quick one hour ride right at the middle of Cotabato. Disembarked at the town hall, they said that the fort was near. Pikit is at the middle of the Davao-Cotabato Highway. I have heard of it first in the news back in the early 2000s, and second during my college thesis research. It was one of the original agricultural colonies that were established later during the American colonial period.

I asked locals, "Diin ang Fort Pikit man?" in Hiligaynon (There were good number of Ilonggos here, but Pikit Poblacion is mostly Bisaya-Sugboanon). The sikad (sidecard) driver brought me to Fort Pikit Elementary School, which was behind the town hall. I asked him, "ang daan bala nga daw balay bala? Daw guba na bala nga ginkampuhan sang PC sa una?" ("The old heritage house or building. It's ruined and has been encamped by ") He stopped and thought, "Ah! Balay Kastila ginamean mo?" (Ah! You mean Balay Katsila?) He led me to the pathway heading towards the old fort.

Locals in Pikit call it "Balay Kastila/Katsila," or "Bahay ng Kastila," (Spanish House) which somehow befits its origins as a Spanish colonial fortification.

Under a big tree and a cow that welcomed me on top of the hill, finally it's there! Fort Pikit. An unassuming wall of rock, stone, and mortar rectangular fort. Unlike its counterparts up in the north (or even Zamboanga and Ozamis), it does not have a grand gate with a crown seal. The walls don't even look imposing enough and can be easily climbed by the enemies. When I went there, it was just an empty fort. No houses, only students taking a siesta in a lunch time from the nearby school.

On top of a hill, an unassuming wall

According to the National Historical Commission of the Philippines inscription, it was built around 1893, as one of the fortifications built to finally subjugate the Bangsamoro peoples. Its position on top of a hill has a clear view of the southern plains of Pulangi River (or Rio Grande de Mindanao). What it lacks on its walls is compensated by its strategic position up on a hill. Soldiers can see what is coming from the river or from the road.

It is also a few kilometers north from Fuerza Reina Regente (now in Datu Piang, Maguindanao).

"Pikit. On the right bank of the river and 34 miles from Regina Regente we find this fort. The perimeter is surrounded by a rubble wall 38 meters per side, two corner towers on a diagonal to each other, and two batteries at the remaining corners. Inside the perimeter is a quarter of two floors, made of wood and covered with a metal roof, an infirmary of tabique pampango and roofed with zinc. Central command, quarters for the artillerymen, workshops—all covered with nipa and wood. A powder magazine of rubble and an armored roof. Total personnel: one officer and 60 members of the infantry and 6 of the artillery.

For better control and dominion of the era, the establishment of a fort 46 miles upstream of Pikit, where ends the influence of the Malayan Muslims of Mindanao and where begins the settlement Montesa de Misamis (Bukidnon) is under study. To this garrison must be assigned one officer, 60 soldiers and 6 artillerymen.”

However, the days of Spanish colonization abruptly ended. When the Americans came, they established an agricultural colony in Pikit at 1913 and initiated the migration of Filipino settlers in Central Mindanao. It became an outpost of the colonial law enforcement, utilized as part of its pacification efforts in the island. It was made as a Japanese imperial garrison by World War II.

After the War, it became an outpost for the Philippine Constabulary (hence the other name of the hill as "PC Hill") the ancestor of the current Philippine National Police. The Philippine Marines made it as their headquarters up to 2005.

Despite being occupied continuously since the Spanish times, the wall perimeters, the baluartes or bastions, remain intact. The walls, with its mamposteria (stone and mortar) look is exposed to the elements. A barangay just down the hill was named after it. The locals call it still "Balay Kastila/Bahay Kastila."

Four years later, that high noon, we visited and experienced it. I was wondering, what will the national government do to this petite fortress on top of the hill. Will it become a public park? Though it had colonial origins, the landmark laid layers of histories of what was once the frontier of the Philippines.

It's 2020. I wrote an original post about this sometime ago, but got lost when my abandoned my old blog. Hopefully, when the Pandemic is over, we can go back there and check it out once again.

How to get there:

- Take a bus at Ecoland Terminal bound for Cotabato City. It will pass by Pikit.

- Same thing, but done the opposite way. Take a bus or van bound either to Davao City, Kidapawan, or Kabacan. It will surely pass by the town.

The landmark is the Pikit Town Hall. From there, you need to walk (or take a sikad). If you are asking a local, ask where is "Bahay/Balay Kastila" rather than Fort Pikit. They may refer you to the barangay and the school behind it.