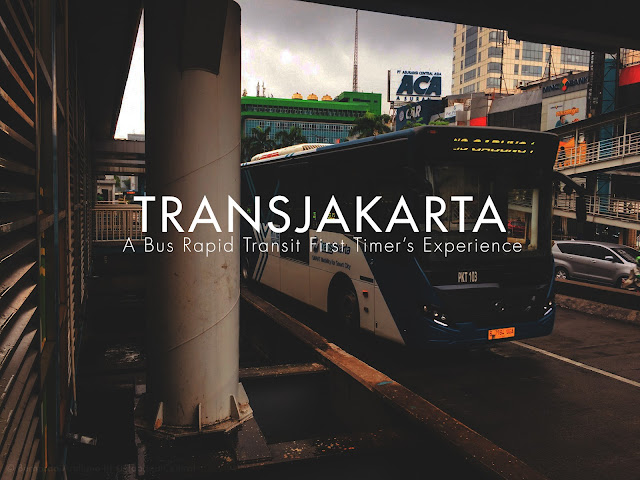 There have been plans to place a new mode of transport in the Philippines, the Bus Rapid Transit or BRT. It is like metro rail or light rail, but instead of trains it will use buses. Also, it will have its dedicated lane at-grade (under, or over) for the buses to traverse. This system is way different from those seen on EDSA Buses (Pre-COVID era) which, though it had a “dedicated yellow lane,” still under a traditional system gone chaotic—irrationalized and tendency to “bunch” in one stop for several passengers. The EDSA Carousel may be our closest example of BRT, for now.

However, in Southeast Asia’s largest metropolis—Jakarta—its BRT system is said to be the largest in the world. Fortunately, I was able to experience it firsthand on few of its routes and stops when I visited it a few years ago.

TransJakarta at a Glance

Despite it being the most populous and quite larger than Manila, Jakarta had no metro rail transit. Though it had a functioning commuter train, most of its intra-city public transport relies on several of its bus companies and angkot (their own version of jeepneys). Private cars flood the metropolitan jalan. Traffic congestion was so bad that the Governor of the city feared that by 2014, the city will be in a standstill. . In response, the government established TransJakarta based on bus rapid transit (BRT) model and was said to have been inspired by TransMilenio of Bogota in Colombia.

At first, it was said that most Jakartans were a bit hesitant with this, especially that some lanes will solely be occupied by buses and not with cars. As time passed, its ridership gradually increased from 16 million to 190 million passengers in 2018. Last February, it accommodated around 1 million passengers in one day.

As of latest, it has a network spanning 251 kilometers, 26 bus stops (stations or halte) and 13 bus corridors around Greater Jakarta area, the largest BRT system in the world. It now mutually supports the metropolis’ newest metro transit.

Because of this, when I had my opportunity going to Jakarta back in 2018, I must try what BRT is all about. It had been a dream in the Philippines, so let us see.

The Ticket and Halte Gambir 1

Having stayed in Stasiun Gambir near Monas and still have the entire morning and noon to have a glimpse of Indonesia’s capital city, I bought an OK OTrip (One Kard, One Trip) card (now Jak Lingko) for a few rupiahs. I think around 5.000Rp in an Alfamaret convenience store. Setting my eyes at Kota Tua, the old Batavia of the city, I took out my mobile phone and took out the map of TransJakarta.

Woah! It was extensive and somehow overwhelming. There are two halte in Stasiun Gambir and I must get into the right one or risk getting lost in the “Big Durian!”

Hmm, so the map tells me to go to Halte Gambir 1, just on the north gate of the station and take a Number 2 (Pulongadung 1-Harmoni) Bus bound for Harmoni Sentral. All right. Good thing the map is color coded and has a number of the bus route.

That rainy morning, the bus stop was not full. There was no queue. I entered and tapped my OK OTrip card and head on. The halte has a monitor tracking the whereabouts of the bus. It was sheltered and felt safe. However outside, it does not have a dedicated lane. It looks like an ordinary platformed bus stop. It was spacious at that time and the personnel was kind enough to assist this Orang Filipina not to get lost.

Then a few minutes of waiting, Route 2 has arrived and took a short ride (of only two kilometers) to Harmoni Sentral. Much of my bus ride was unremarkable.

The bus was spacious enough, but it felt more like EDSA MRT-ish in width.

Harmoni Sentral is a large bus hub. It is an Interchange Station (Halte/Stasiun Transit) where different routes from all over Greater Jakarta merge. Ten different routes from 8 bus corridors intersect the said station in the middle of Jalan Gajah Mada. Because it is an interchange station, people transfer from one route to another in this platform, making it one of Jakarta’s busiest. From this station, you can head to almost all directions of the capital city. Much like how KL Sentral functions in Kuala Lumpur.

Architecturally it is utilitarian but functional enough. I think most of it is made of aluminum, steel, some glass, and some plastic.

It has several gates dedicated to a route, much like platforms on rail or gates on airports. That means, if you arrived through Bus Route 2 and heading to Kota Tua or North Jakarta, you need to look for the gates for Route 1 and 9B. Luckily for me, it was not a rush hour. I heard from some friends that Harmoni can get very crowded on rush hours.

Being an interchange station means that you do not need to leave the station to transfer to another route. No need to walk several meters (or through intense heat or knee-deep floods) just to get into another route. Like the small Halte in Gambir, it is sheltered and interconnected to different sides of the road.

Jalan Gajah Mada runs north to south, from old Batavia to MoNas and on to Jalan Tharmin where the newer Central Business Districts are located. As for my bus trip here, it was not full, fortunately. I stood and appreciated as the scenery changes from loftier buildings to denser streetscape. It did run through Glodok, Jakarta’s Chinatown with all those shopping malls and shops. I wish I had more time exploring the capital city next time, but I went on.

TransJakarta here has a dedicated lane throughout the journey. As I see the private cars and some angkot crowd the busy street, the bus was running freely on its own dedicated lane. It is lined with barriers—the same concrete barriers that they use in EDSA, yet it has an easement and a slot for the barriers not to move—for both the bus lanes and private cars.

However, it is not all dedicated. In some areas, there are U-turn slots while others have roads to narrow that a barrier may be a source of an accident especially for turning vehicles near intersections. There are clear signs though that there are areas where private vehicles can use the dedicated lanes or not. Like our Yellow Lanes in EDSA, it has a certain distance from the destination corner.

Approaching Kota Tua, the road has become narrower. From four lanes of private car lane, it is now two. And as we approach Halte Kota, the barriers disappear, and the buses are back on the shared road lanes. Stasiun Kota was a complicated bus stop since unlike Harmoni, its stops are spread all throughout the square in front of the colonial-era Jakarta Kota Train Station.

I alighted the bus and head on to my destination—Kota Tua, and crossing the busy streets need some nerves of steel.

A Review of Our First BRT Experience

I went back to Stasiun Gambir the same way I took. A one-way ride from Gambir to Kota Tua on a non-rush hour through TransJakarta was around 30-45 minutes for a six-kilometer route. It is decent considering that this is not a metro-rail, but a rapid bus transit that does not have a consistent dedicated route all throughout the journey in Jalan Gajah Mada alone. Here were some of the things I noticed during the journey:

Overall, it was a novel experience for me. Buses can be like trains—dedicated lanes, ticketing, and system of operations and transport people as rapidly as possible, especially on heavy traffic corridors. It has its certain pros and cons, but it seems that when we are gearing towards the right direction, the pros outweigh the cons.

The EDSA Carousel is an attempt by the Government to replicate the BRT experience. It has its own dedicated lane and platforms which would support the overburdened Line 3 of MRT (Yellow Line/EDSA Line). Attempts were made in the past—have buses its own yellow lanes, rationalization, attempt to abolish the boundary system, and P2P, but the transport system in our country is a complicated political and economic entangled mess, especially in Greater Manila Area. Cebu, which had advocated BRT for over a decade now, has yet to see the light of the day of its implementation. My thought is that the managers may learn from the experiences of other cities like Bogota and Jakarta when it comes to the BRT and adapt it on our local context.

And hopefully those concrete barriers, speed limits, bus doors, platforms, and proper easement for buses, private cars, bicycles, and pedestrians would be placed properly. The important thing is mobility for much of the populace.