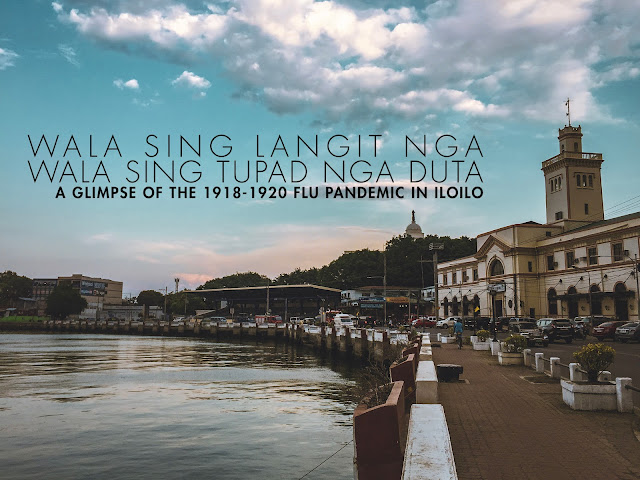 It is already in the fourth quarter of 2020 and we have yet to resume our “new or better normal” yet. Much of our country is still grappling on containing cases of COVID-19. Travel restrictions, quarantines, and news about the disease lead our daily lives nowadays. However, one wonders what were our ancestors doing a century ago when the 1918 Flu Pandemic ravaged most of the world?

There were studies and notes about it, but in the context of Philippines, only a few of it is accessible, one of which was Dr. Francis Gealogo’s "The Philippines in the World of the Influenza Pandemic of 1918–1919.” It gave an overview of the Philippine situation and how the flu virus spread all throughout the islands (See related blog post here). However, we were curious as to what was life back then, especially in places hard hit by the pandemic like my hometown, Iloilo. Curiosity, coincidence, and serendipity led us to a glimpse in National Library’s Digital Collection of the 1950s Historical Data of Towns and Cities in the country.

Browsing through the Historical Data of the NLP Digital Collection for our research, we stumbled on Iloilo City and Province’s records. Fortunately, they were able to upload it, though it is quite hard to read. Typewritten, it was a product of an era wherein the country tries to rebuild its historical and cultural data that was mostly destroyed during World War II.

Reading on, we stumbled on the section of Iloilo City’s experience under American Occupation. It did mention about the deadly cholera outbreaks that were a common denominator all throughout the country during the early years of American rule, but it was this recount that caught us off guard:

“The news of the fall of the Kaiser made the people jubilant,” as the paragraph starts referring to the end of World War I in Europe. It adds, “Money was plentiful although prices were sky-high.” The jubilant paragraph segues into a grimmer tone with a known Ilonggo quote: “Wala sing langit nga wala sing tupad nga duta.” (“There is no sky that has no land opposite to it.”). (Iloilo City n.d., 6)

“An epidemic broke out in the city.”

The account continued, “It was known as the ‘Grippe’.” It is an old name of influenza or flu.

“So many people died that even the schools were temporarily closed. Church bells were no longer rung for the dead to avoid frightening those who were sick.” The paragraph ends with “Those who were able to survive either became demented, crippled, or bald-headed.” (Iloilo City n.d., 7)

And guess when the sense of normalcy came back?

“By 1920, life in the city became normal as people once turned to their daily pursuits. The life of the common laborer began to be noticed.”

According to this account, it took two years for the sense of normalcy to come back in Iloilo, which at that time was an important port town due to transshipment of sugar.

And while the city recalls those morbid scenes, the Provincial account wrote a portion of about epidemics and measures to contain it. While it does not directly relate to the 1918 Pandemic, it gives us somehow a glimpse of the measures used to contain communicable diseases.

The writer started that communicable diseases are “a way of life” and a “yearly occurrence” that “it serves as Divine punishment.” It also adds that sanitation was not known until the Americans occupied it.

Then it goes, “the adoption of the quarantine system even during the period of rinderpest was strictly enforced.” (Bello 1954, 32)

Then the writer describes how people back then react to it:

"The people could hardly understand these preventive measures, but they must have to comply under pain of penalty from the government.” (Bello 1954, 32)

Woah there, now it sounds familiar!

It adds, “The fight against the spread of communicable disease was a sure but slow struggle against ignorance and superstition.” It may refer to the probable resistance of the people to comply based on the writer’s perspective. Probably this would be a good area of study in the future for social scientists.

The writer ends the epidemics part with the educational system being one of the agencies that assisted the fight against communicable diseases.

Upon reading this section, we could not help but wonder how strikingly similar the thoughts on quarantine and the implication of the "pasaway" were if we are to base it in this alone. However, we also need to understand why there is such resistance or the question of its implementation as well.

The digital collection of NLP for the Historical Data of the Philippines is not yet complete. We tried to look for other accounts with similar mention regarding the 1918 Influenza and experiences and so far, only those of the cholera, World War II, the Philippine Revolution, and the foundation of the towns and cities were usually mentioned. Not even its neighboring towns (now districts) have much account of the 1918 Flu Pandemic.

Given the degree of deaths associated with influenza during those times, at 55 people per 100,000, Iloilo is the second hardest hit province during the 1918 Pandemic, second only to Pangasinan. (Gealogo 2009)

Given the limited access to libraries and archives during the time of this current pandemic, one can only hope that we can get more light as to the plight of our folks back in the “last great pandemic before Covid-19.” Most likely there will be on accounts, newspapers, or journals waiting to be discovered.

Though Historical Data was written more than 30 years after the pandemic and has been criticized for some of its inaccuracies, it is still an important data set that gave us a glimpse not only on the subject matter that they are writing, but also on how people back in the 1950s think, write, see, and experience things.

You may access the National Library of the Philippines Digital Collection Historical Data here.