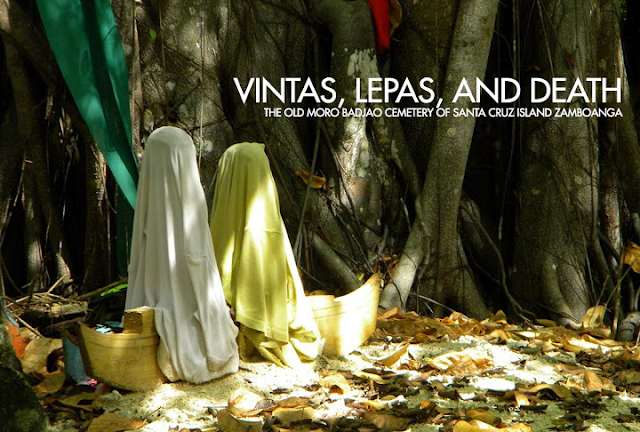 As Santa Cruz Island in Zamboanga City is known for its pinkish-white beach, a lot does not even know that it has one place that time and the elements have forgotten. For the culturally inclined, this is the old Badjao, or Moro Cemetery. For some paranormal and ghost hunters, this is where the dead were buried.

Just a few meters walk east of the main beach “resort” of Santa Cruz Island, the old and abandoned cemetery is hidden beneath the bushes, balete (banyan) and calachuchi (frangipani) trees. I was accompanied by Manong Alsin Alptan, a Tausug resident and CAFGU of the island, since going alone is not recommended (and you might get yourself lost actually). The cemetery itself is hard to find either.

When we reached the place, the place was full of wooden markers called in Tausug as “sundok.” I asked permission to the “spirits” to let me take some photos of it (I may be a city dweller, but I still adhere to superstitions of the locals). What is unique here is that the relatives of the departed usually decorate the tombs with carved wooden boats (lepa or vinta as it is called in Sulu Archipelago) and wooden dolls above the tomb. The dolls then are dressed up either by a tubao (head bandana of the Moro peoples) or a putong or songkok. For women, the Badjaos usually bury mirrors, combs or any item that is associated with women’s household. The Sama Badjaos and some Tausug still carries the tradition of seafaring, even onto their deaths. The journey to afterlife for the Badjao is still by boat.

The wooden lepa or vintas on top of the tombs hark a tradition that have been observed since the pre-colonial or probably even pre-Islamic Sulu and Mindanao times. Boats have been symbolic of crossing to the afterlife, especially to the pre-colonial Filipinos, whose environment may have influenced how our ancestors perceive it. There are gravestones in Batanes that are shaped like boats. William Henry Scott, an anthropologist who have studies pre-colonial Philippine society, took note that ancient Visayans believe that the souls of the departed are delivered to the land of the dead by boat. (Scott, 1994, pp. 92-93). Even the Manungul Jar, a secondary burial jar, has depicted crossing the afterlife through a boat in the jar's lid. Given that we are an archipelago, boats have been the main mode of transportation for our ancestors, especially those who are at the ilawod communities or seaside/riverine settlements.

However, according to manong Alsin, the city government has already advised the Sama Badjao to stop burying their dead here a few years back, since the city would be developing the place for tourism. Hence, the cemetery was abandoned. The Sama Badjaos on the other hand, have a new cemetery—on the far end of the island.

Since then, the cemetery fell into disrepair. Only a few relatives come by and clean up the tombs of their loved ones. The rest were forgotten. Yearly still, they come and replace the vintas and the wooden dolls. Yet despite these traditions, the Sama Badjao, Tausug, and some other Moro groups still bury their dead as per Islamic custom. Syncretism manifested. .

Personally, it was an introduction to another culture. This was my first time visiting a Muslim cemetery. It was an enriching journey of appreciation. Santa Cruz Island does not have only natural beauty, but also cultural significance for the Moro people.

The article was originally written in November 2011. Some of the contents have been changed.

Where is it: Grande Santa Cruz Island, Zamboanga, Philippines