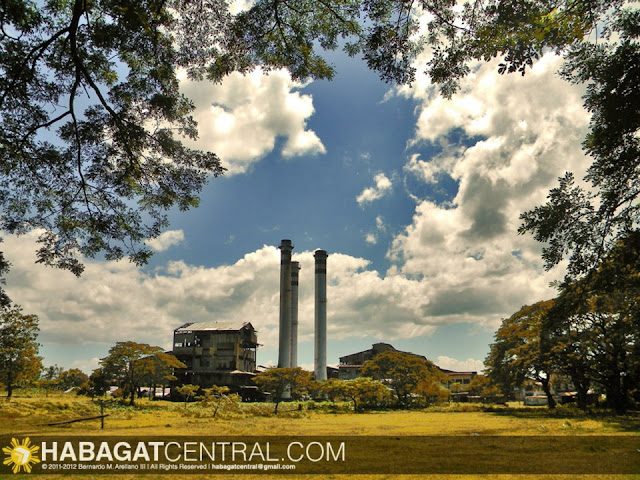 It was MassKara weekend in Bacólod City in Negros Occidental and I was about to cover it. However, I prefer to go the other way around than the usual Talisay-Silay-Victorias route which tourists would flock before MassKara higlight. Good thing though, Rain Varela, a great friend of mine was glad to tour me in his hometown, this time down south—at Bago City. The city is the bailiwick of the Araneta clan, one of the most influential clans in the Philippines, and within it lies what was once the pulsating sugar central of Ma-ao.

Ma-ao Sugar Central, or Ma-ao Central for short, is an hour and a half drive from Bacolod City. Located approximately 40 kilometers away from the capital city, 20 kilometers from Bago, it was once a booming agro-industrial estate was founded by the Araneta clan, notably by Don Juan himself, the general that stood up against the Spanish colonizers. Ma-ao Central was established in 1920 when the Philippine National Bank provided substantial loans for its establishment due to shortage of domestic capital and available credit sources. (Larkin 1993), making it one of the oldest sugar centrals in the province of Negros Occidental.

The sugar industry of Negros traces its roots with the opening of Iloilo’s port to international trade in 1855. Among the foreigners that arrived was the British vice-consul Nicholas Loney who invested in modernizing the industry by providing modern equipment to the planters such as centrifugal iron mills and steam mills. (Legarda 1999, 308-311) Ulbe Bosma noted that when the Americans colonized the Philippines, the industry was revamped as highly capitalized sugar-processing factories called Centrals. These were managed by a tightly networked Filipino sugar planters that has dominated the economic and political scene of the country for the rest of the 20th century. (Bosma 2018, 125)

During its heydays, the central was a bustling city on its own right. Chugging old iron dinosaurs come in and out of the mill coming from hectares of sugar plantation, the chimneys vent out steam and smoke, the sweet smell of muscovado fills up the air and the community was as vibrant as a busy street. Ma-ao Central has its own church, own housing for its staff, own market, own bank, park and recreational facilities and all others. Ma-ao’s workforce enjoys privileges such as housing, free scholarship for their children, and several other perks. Some would even say that Ma-ao can even become an independent town on its own.

On one side of the central is one of the ancestral houses of the Araneta Clan, the “Balay Dakû” or “The Big House.” It has been a witness on the history of the family and the sugar central that they manage. The two storey home is made of concrete built with columns and a bit of European accent, enough to be dominant in the Central community, as it faces the Ma-ao Sugar Mill just a few meters away. (Maao Sugar Central in Our Hearts 2010)
The sugar mills rolled on as the seasons of tiempo muerto and milling planting goes on and on. However, several years ago, Ma-ao Central ceased to operate. Some blamed on the effects of the sugarcane economy as it is not as profitable as it was. However, there is another story that the ones who were supposed to manage the sugar central have shifted its focus into their urban development business, leaving the heirloom on its downward spiral. One of the largest and oldest sugar centrals in Negros Occidental—just died. I was even surprised that Ma-ao Central ceased to function, for I thought it was still operating just like the other sugar centrals in the province.

Today, Ma-ao Central is like a silent barrio in a far-flung area, smacked in the middle of the sugarcane plantations. The steel sugar mill and chimneys still stand, yet it is no longer busy and noisy. The old railroad tracks disappeared gradually—perhaps to the looters. The iron dinosaurs were brought to extinction. The community is no longer buzzing with business, only that tranquil provincial calm prevails. Houses have deteriorated over time and elements, and the great Balay Daku stands mute as a reminder of its fortunes and glorious days.

Goats were the new occupants of the central—they are everywhere! Carabaos roam and people who were either former workers of the central, or new migrants, go on with their everyday life—without the humming noise of the mills and the trains.

Yet hope lingers. Rumors have it that Ma-ao Central will be revived once more. Not as a sugar central that it was, but an ethanol production plant. Also, there have been reports that someone from Manila has already purchased the old sugar central. Hence, people may see the steam from the mill’s skyline rise again (or fall).

Ma-ao Central still stands silent for now. A witness of the way Negros Occidental was, the economy, society and its bittersweet stories and histories.

The essay was originally posted on 25 October 2011, with some updated references. Photos were taken on 2011. There may have some changes by the time this was written and photos taken.