Into the Rim of Fire: A Journey to Taal Volcano’s Main Crater 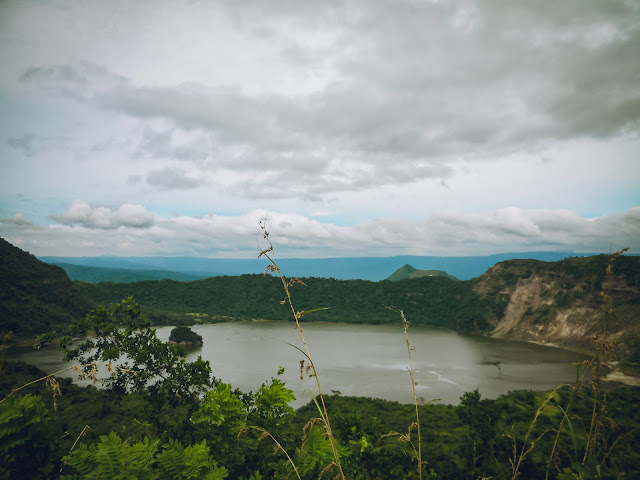 Taal Volcano Island is now a “no-man’s land.” No one can go back there or go there after the 2020 Eruption. As of the time of writing, the volcano is on Alert Level 2 or “Increasing Unrest.”

Taal Volcano Island, locally called as Pulo, is a no-man’s land. No one can go there nor resettle back after its eruption a year ago. The once lush carpet of cogon grass and shrubs are now covered with grey ash. Most likely we will not be able to step in the island in our lifetime anymore. However, in 2014, we had an opportunity not only to visit the main crater but swam on Crater Lake.

Daang Kastila, or Spanish Trail, was the most popular trail in Pulo. Hoards of tourists pass by this area heading towards the rim of the main volcano either by foot or by horseback due to its ease. However, there was a far less accessible, a bit challenging, trail further south of the island, locally known as “Secret” Trail.

Located at Barangay Alas-as in San Nicolas part of the island, the two-kilometer trail starts with the fisherfolk community then gradually winds up towards the crater. Fortunately, it was a cloudy day since the trail does not have ample shade to protect us from the sun’s heat. The walk took us around 45 minutes from the shoreline to the makeshift viewpoint. I was panting my lungs out! “Patraydor” as the trail was going up to the rim of the main crater. The gradient was not steep until we are a few meters from the rim.

I thought we will just be up there, but our local guide said, “Tara na ser! Bababa tayo doon sa lawa.” (Let’s go, sir! We are heading to the Crater Lake.) Wait, what?! There? There was this one point that I was hesitant yet the explorer side of me wants to go there too.

At that time, the trail was really a rough one. It has no handrails, strewn by boulders, and at times a bit steep. For a heavyweight like me, the trail going down to the Crater Lake was challenging. My companions do not seem to mind the challenges, but for a city folk like I, this was one tough trail to navigate—and I was wearing only rubber slippers too.

It was another 30-40 minute arduous decent to the Crater Lake. While it was shaded, the steepness of it was something else!

Hotpot: Taking a Dip at the Crater Lake and Much More

It was around late morning when we reached the Crater Lake. I could not believe that I would reach this extreme feat—to be this close with a volcano. The vast expanse of the Crater Lake was covered with lush greens of shrubs and grasses. Vulcan Point, an islet within the Crater Lake, sits peacefully. Finally, we were there!

It was tranquil. The water was calm yet warm, just like those in the hot spring resorts of Pansol in Laguna. You can hear the chirping of the birds. We had the Crater Lake only for us. No other tourists were there at that time. The local guide asked us to take a dip at the warm waters of the lake. I was then again hesitant at first but took a dip anyway.

The scent of the water was that of sulfur. At that time, waters were dark green. It was smooth in the skin, as if it were like soap. I thought it was very hot, but when I took a dip, it was relaxing as if all my problems getting there and of my graduate school, went to the center of the earth. It was the best 15-minute warm dip that I had that year.

However, American researcher Thomas R. Hargrove warned people that it was not advisable to take a dive into the crater lake as it was highly mineralized. (Hargrove 1991, 179-185)

There was fumarolic (steaming) activity just below the observation deck of Daang Kastila. We can see crowding of people at the edge of the volcano at that side. The local guide mentioned that sometimes there were people who throw golf balls in that area.

The local guide, whose work is a fisherfolk of Taal Lake, added that only a few people knew this “Secret” Trail due to difficult terrain and the fact that it leads to the Crater Lake, which at that time was highly discouraged due to the volcano’s activity (at that time, if my memory serves me right, it was Alert 0 or 1). They too went there and take a swim all the way to Vulcan Point. He said that guiding tourists was his side gig—an additional income for his family who is living at the edge of a volcano.

We packed up and went near the fumaroles near the Daang Kastila rim. There was steaming parts of the area which is marked by yellowish-white rocks. The water at this part is literally boiling from the warm earth beneath it.

There was a steam fissure at the northeastern side of the crater. We stayed away as much as possible since the smell of rotten eggs was strong in this area. A few meters away is a PHIVOLCS’ monitoring equipment and another fumarole—though this one has stronger steam than those near the crater lake and Daang Kastila rim.

While we were heading back to the observation deck, I accidentally slipped in the hot earth. My right foot had a scrap with Taal’s hot soil! It was not painful, and I was all right, though the sole of my feet was scratched, and a bit burned (napaso).

The steaming activity reminded us that we are still at the belly of the beast—that this erupted 40 years ago (Hargrove 1991, 147) and has the title of “Philippines second most active volcano” and a “Decade Volcano” by Smithsonian Institute. That it had once blew its top that created the caldera where Tagaytay Ridge, the Lake, and what is now mostly Batangas and Cavite.

And we were heading back to civilization.

The thought of going up to the observation deck on the rim of the Main Crater kept bothering me that time. It was hard going down, how about heading back? And I was not wrong.

My companions and the local guide aced going up, thanks to their healthy and worked-out bodies. However, it was like traversing the Calvary to me—it was steep going up and the trail was made of lose boulders. It took us 45 minutes to go down. How about going up?

It was hot since it was noontime already. Though it was shaded, but the heat and humidity were something else. There were times that I was left out by my companions by a few meters, and they need to wait for me.

It took me an hour to ascend that one-kilometer trail of loose boulders and shrubs. I got rewarded by the great view of the crater lake and a cool coconut juice to quench my thirst.

After a few minutes, it was an easy yet hot 30 minute decent towards the fishing community in Alas-as. We took a bit of time to rest before heading back to mainland.

As the kids of the community bade farewell to their visitors, we saw flocks of egrets along the coastline of the lake. The trees stand tall. The fish pens were manned with fisherfolk doing their livelihood.

Indeed, it was a “once-in-a-lifetime” experience in heading towards the rim of Taal’s main crater. For as long as I remember, I can only see the Volcano Island, or Pulo, from a far away vista of Tagaytay. And here I was, took a dip in the hotpot and even brought a souvenir of burned and scratched right sole.