Kulambo at Mumog: The Health Protocols in the Philippines During the 1918 Flu Pandemic 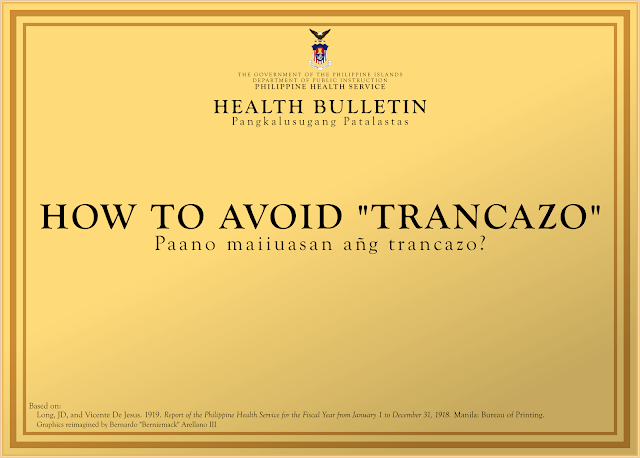 Are you tired of wearing that bulky headband called face shield? Are we bothered with downloading contact tracing apps, or how about bringing your alcohol bottle wherever you go? We feel incomplete when we do not wear our face masks when we go out, right? These things have become part of our lives a year after Covid-19 changed our way of living, especially interacting with the public. Health protocols were designed to prevent or minimize the spread of the said disease in the community at the same time saving lives, some practical while others borderline ridiculous. Yet it was not our first time dealing with these as our lolo or lola-sa-tuhod, or great grandparents, may have experienced these during the last great pandemic in 1918-1919, also known as the “Spanish Flu Pandemic.”

During the American colonial period, the Philippines was not spared from the raging pandemic that have affected one-third of the world’s total population at that time. (Centers for Disease Control and Prevention 2019) According to historian Prof. Francis Gealogo of Ateneo de Manila University, it was earlier detected in Manila, particularly at the docks sometime in June 1918, while the second and deadlier wave around October of the same year. (Gealogo 2009, 275). The infamous pandemic was then called or categorized as influenza, trancazo, or grippe.

With the spread of the contagious disease ongoing, the Philippine Health Service, the forerunner of Department of Health, had to remind the public on health and hygiene protocols to prevent the spread of the disease that has packed Manila’s hospitals and medical centers to the brim. (Long and de Jesus 1919, 64). A bulletin was said to have been distributed to the public, particularly to university and school pupils and workers which laid down the advises on how not to get trancazo.

The health bulletin had several protocols that, at most, are familiar with us nowadays. Some of these are peculiar while others have been observed but in a more “modernized” fashion.

The first sentences elaborated prevention of contagion by practicing good oral hygiene. It is the usual brush your teeth and gargle several times a day and using toilet antiseptic like a weak solution of borax or agua oxigenada (hydrogen peroxide). 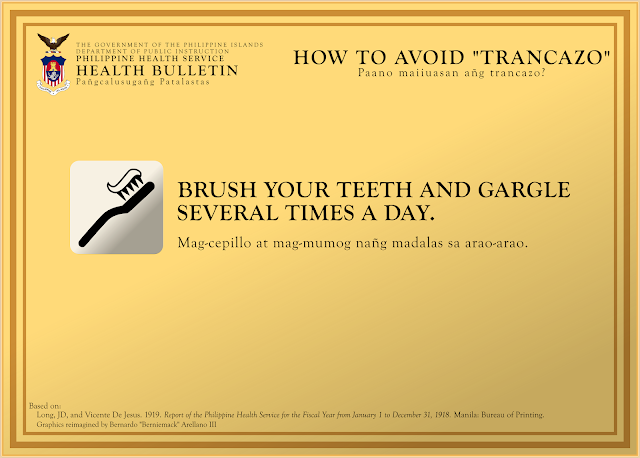 Covid-19’s earlier study suggested that transmission is done through fomites or drops of saliva or mucus expelled by coughing and sneezing. In 1918, the same notion has been indicated in the bulletin. It advised people to avoid these. 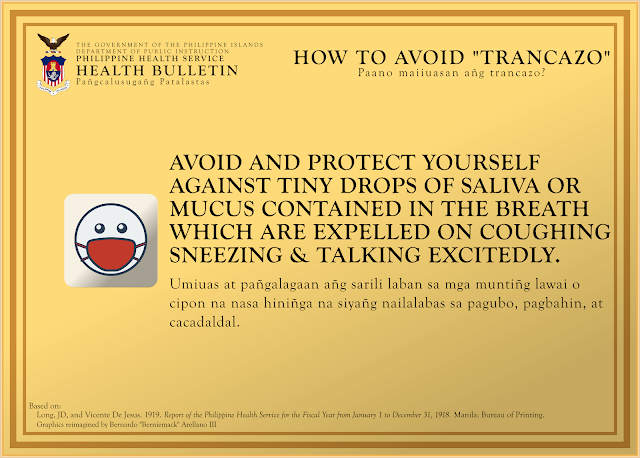 It is not the first time when we were advised to be apart from each other to avoid transmission. The bulletin advised the public to be four feet apart or more whenever talking. Of course, the difference between then and now is that we have our smartphones and the internet. 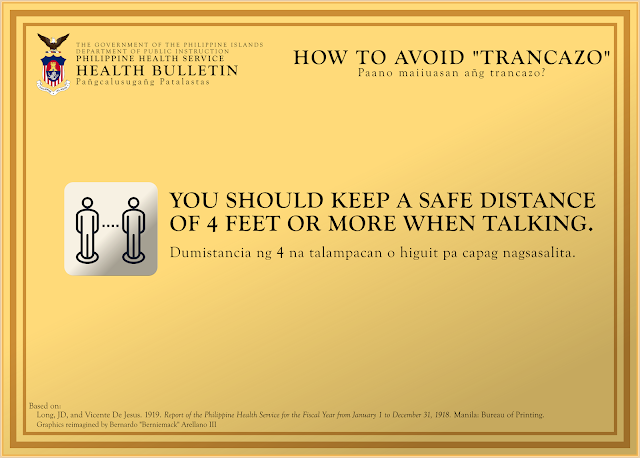 Remember when the Department of Health advised us to cover our nose and mouth whenever talking using face masks, N95 or cloth in the community? In 1918, aside from talking far away from each other, the Health Service advised to cover our mouth and nose to prevent danger. While face masks have been there for quite a while, it was not as mass produced as we have now. A clean handkerchief would do. 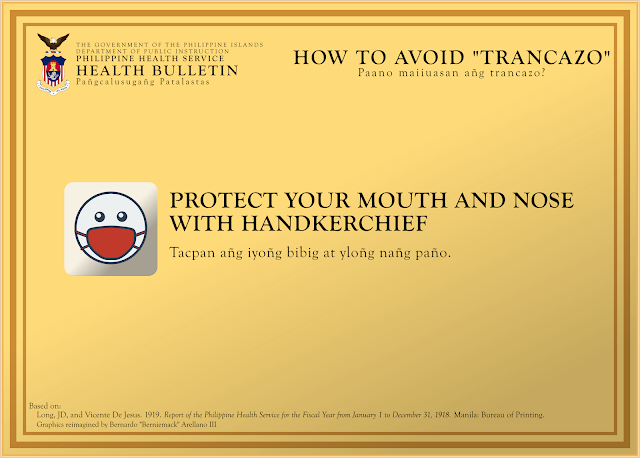 Perhaps this was not mentioned explicitly in our current health protocols but spitting “promiscuously” on the floor is strictly prohibited. 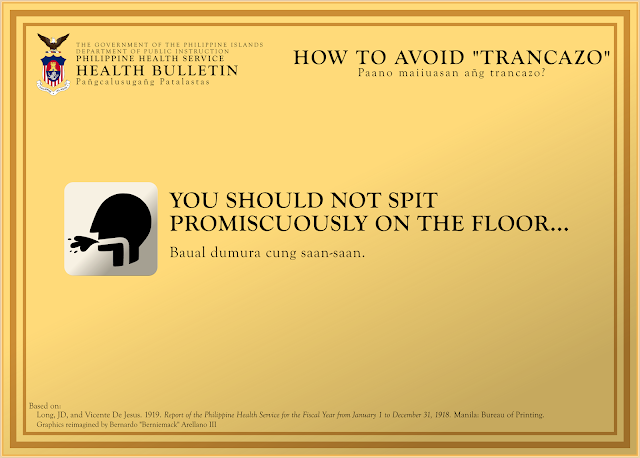 6.     Scalding utensils and your hands with hot water and soap

When we read the text at first, we were quite surprised on how the paragraph was written:

“All the tableware, especially that used by a patient, should be thoroughly scalded (washed with hot water and soap). Also, the fingers when they are used for eating.” (Long and de Jesus 1919, 64)

We just must put this in direct quote. However, one subtle idea that came out of it was to “wash your hands with soap and [hot] water.” Another one is to sterilize the plates and utensils used, especially by those who are sick. We are just not sure why they used the word “scald” as it feels like it came from some horror movie or telenovela. 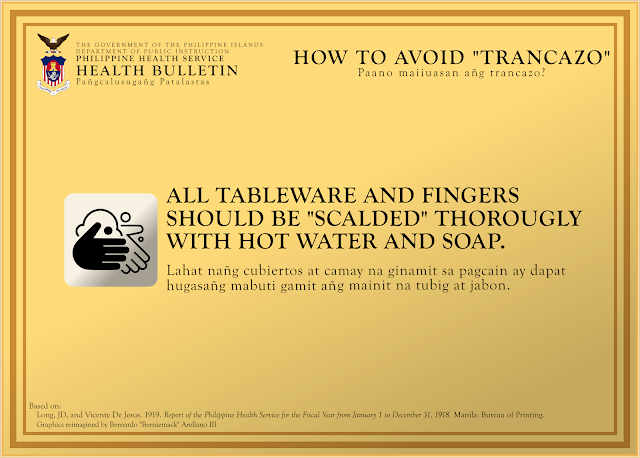 7.     Bawal Burara: Touching your nose and mouth then shake hands.

The bulletin was rather harsh when it advised people not to touch their noses and mouth, then shake hands with friends or touch sanitized surfaces afterwards.

“It is a vicious and course habit at all times, and especially during an epidemic of “trancazo,” to put fingers in the nose or in the mouth and then shake hands with friends or infect with them things otherwise clean.” (Long and de Jesus 1919, 64)

We should not even do this, even pre-pandemic times. 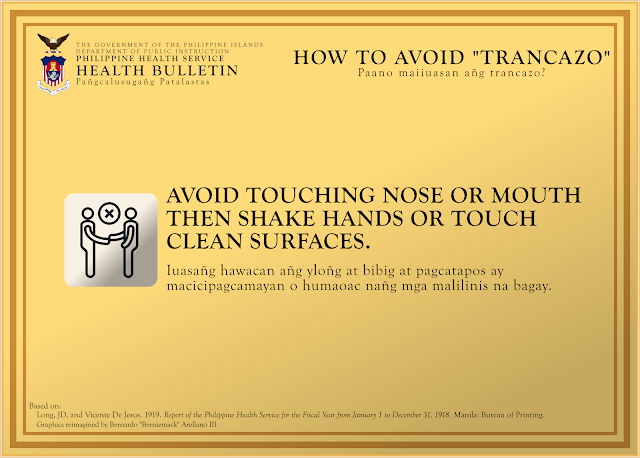 We have our face shields nowadays, right? Back then, the Health Services advised the public that regardless of if you are healthy or sick, one should sleep inside a mosquito net, or we Filipinos call it kulambo. That was with a perfect sense at that time, given the prevalence of other insect-borne diseases such as malaria, and cholera was still on the rage at that time. Mosquito-borne diseases may worsen the symptoms of those who may have been infected by influenza.

Your citronella patches and mosquito repellents were not as available at that time. 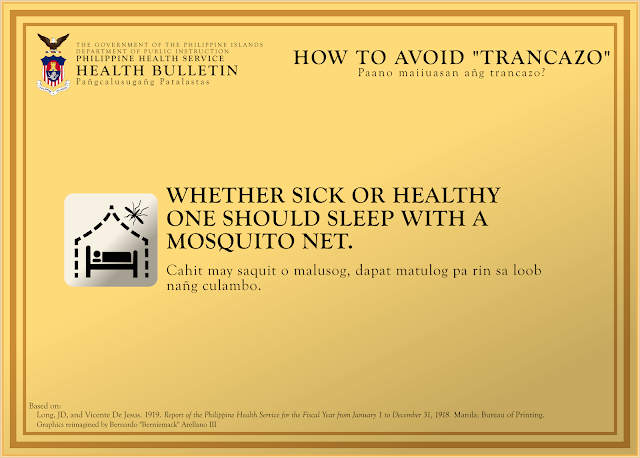 The last of the personal measures was for children and adults not to go out when they are sick, especially the places where there are gatherings. It indicated two things:

“Do not send or permit children or grown persons with an incipient catarrh or malaise with bone-ache to attend the school, workshop, cine, theater, church or other places of meeting or gathering.” (Long and de Jesus 1919, 65)

The bulletin further elaborated through short and concise paragraphs on health protocol advises in a collective setting (offices, commercial establishments, schools, etc.), and how to obtain medical assistance.

We call this as temperature check and place your contact details nowadays. The Health Service advises for daily inspection of personnel, “excluding all those who present symptoms of catarrh or bone-ache.” (Long and de Jesus 1919, 65)

Shared towels and drinking glasses were prohibited for common use.

3.     More of Home Quarantine/Treatment for Mild and Asymptomatics. Severe cases handled by hospitals

Medical advisory mentioned that patients need not to go to the hospital and may be instead visited by their own physician. For the poor, they should report the case so that a doctor may visit them.

It was further elaborated in the report that hospitals in Manila were jampacked with admissions especially from the lower social classes, hence discouraging people with “uncomplicated cases” to be attended by medical officers through supply of medicine.

“In a city with a very limited hospital accommodation (both official and private count less than ten with over 300,000 population) hospitals soon became packed to the limit and a rigid rule had to be drawn for the admission of only complicated cases of influenza most of them being pneumonic or broncho-pneumonic influenza cases.” (Long and de Jesus 1919, 64)

The report has also mentioned that despite the preventive protocols in influenza like isolation, hospitalization, and quarantine of cases placed, it has been proven unpractical. (Long and de Jesus 1919, 64)

4.     Vaccine was still being developed.

Perhaps the last sentence resonates the race for vaccination and attain herd immunity or treatment. At the time of the 1918-1919 Pandemic, the anti-influenza vaccine was still being developed, hence the need to follow these protocols to manage the transmission of the disease.

Most of these protocols advised by the Health Service somehow resonates on how our current rules on face mask, face shield, physical/social distancing, and stay at home orders are implemented. On another hand, upon reading the section of the Influenza Pandemic, we imagine as if our great grandparents must abide by these rules to prevent the spread of the influenza virus. It has also warned us of health facilities filling up due to the uptrend of cases back at that time. Also, the struggle to keep the pandemic at a manageable situation has also taken toll on the Health Service’s response when they deemed isolation, hospitalization, and quarantine of cases as “unpractical.”

History has given us some takeaways on how we can respond better when another pandemic strikes. Most likely, our children or grandchildren would look onto our health protocols, Zoom fatigue, our Dalgona experiences, our mental health struggles, and the seeming inefficiency of our response as pieces of historical accounts that would, we hope, will be taken account and thus improving our public health system and response in the future.

Notice of disclaimer: Take note that the graphics used are creative re-imagination of the bulletins and does not reflect the actual material distributed historically. The orthography used may not be accurate of the times. However, texts are from the actual report with some notes and translation done by the author.
Labels: Asia Culture and Heritage history Philippines Public Health
Where is it: Manila, Metro Manila, Philippines