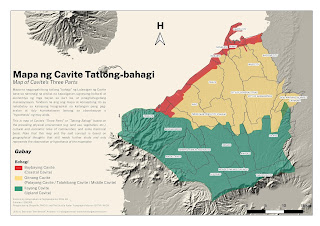 Having grown in the province of Cavite for most of my life, I have noticed some areas of the province has these different kinds of biomes or land uses. On one side, it is mostly rice paddies, then a few kilometers inland are the tall cogon grasses. By the time we reached the “Uplands,” the landscape changes into tree-canopied forest of coconut, coffee, and other trees. We also took note that one town is related to another by their accent, proximity of the marketplaces, accessibility, and even where people go to the malls or what transport services that they took. After having it shelved for decades, we have finally laid it down on a map and a blog post about Cavite’s “Tatlong-bahagi” or “Three Parts.”

Arbitrary rather than set on stone

In the tradition of "regional geography," we will be dealing with parting Cavite into three parts—neither the set boundaries of cities and towns of the province, nor the legislative districts that were carved out of political administration. Though arbitrary and somehow needs further study, we explore its parts through its biome or landscape, cultural and economic proximity between towns and communities, public transport accessibility, and generally how it looks like today.

Cavite is divided into “tatlong bahagi” or Filipino of “three parts:”

If we look at the map, some towns have two or three “parts.” It means the town captures the characteristics of these bahagi or parts.

We named it “Baybaying Cavite” or Cavite Ibaba, referring to the downstream and coastal towns and communities of the province. It is composed of the coastal communities and poblaciónes (town centers) of Bacoor, Kawit, Noveleta, Rosario, Tanza, Naic, Ternate, and Cavite City. The term baybayin refers to the coast which can be interchanged with ibaba, a term used mostly in Tagalog language to the downstream communities.

The biome of this area is best described as “coastal,” with some dominated by fishponds and salt pens, like those in Bacoor and Kawit. It can also be dominated by bakhawan or mangrove forests. However, most of the coastal area of Cavite is a long grey sandy beach that stretches from southern Metro Manila to Ternate.

If there is one thing that describes its weather, during tagtuyot (hot and dry season) it is blistering hot and humid around here, given its closeness to Manila Bay; and during tag-ulan (rainy season) as rainy—to the point that it gets flooded from time-to-time—because of its lowland topography. It frequently floods here, particularly in Bacoor or Kawit—once dominated by fishponds and bakhawan.

For some Caviteños like I do who grew up in the “Aguinaldo Highway” corridor, going to Kawit or Cavite City feels like a different world. The Tagalog accent here has its own peculiarity that I could not describe. Houses are close to each other and streets are narrower. There is this certain “old world charm” that Baybaying Cavite exudes, partly because of its prominent historic role from the pre-colonial times to Spanish colonial era, and most especially during the Philippine Revolution with Kawit and Bacoor said to be the birthplaces of Philippine Independence.

Cavite City was once the capital of the province. It was the country’s shipyard during the Spanish colonial era and the gateway to the Galleon Trade. It has its unique culture—shaped by the confluence of indigenous Filipino, Spanish, Chinese, and even Mexican cultures, that is manifested in its celebrated traditions such as the Porta Vaga; its culinary delicacies such as pipian and bingkoy; and its language, Chavacano Caviteño.

Being close to Metro Manila, it has experienced urbanization in a rapid pace, to the point that some of its roads have become notorious for traffic jams. Despite the wave of dayo (or migrants like I), in the old town centers and roads of Baybaying Cavite, it still holds that taal na Caviteño (literally “pure” Caviteño but is used referring to the long-time native Caviteños) character through its architecture, language, food, old churches, and historical sites.

To be continued on the second set.