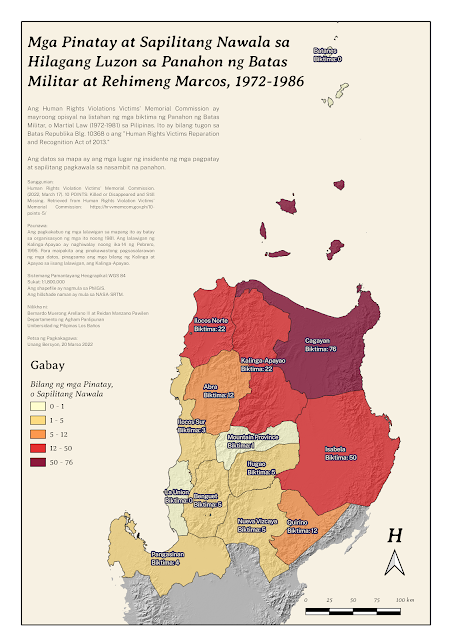 “Solid North!” This is one indicator of baluartismo of national politics referring to the solid votes and support of the northern Luzon provinces of former president and dictator Ferdinand E. Marcos during his reign, especially during the Martial Law era and the years after. Marcos was born and raised in Ilocos Norte, and his influence is said to permeate the Ilocano and northern Luzon society. There is a notion that Ilocos and the rest of the regions were treated more “fairly and humanely,” hence the continuing support coming here. However, this has not been always the case.

The Human Rights Violations Victims' Memorial Commission has an official list of victims during Martial Law Era and Marcos Regime (1972-1981). It categorizes various abuses ranging from involuntary exile to enforced disappearances or killing through a 10-point system in the Motu Propio Roll of Victims.

"The Roll of Victims is the official list of Martial Law 1972-1986 era victims, including the place of incident of the violation against them, as resolved by the Human Rights Victims’ Claims Board (HRVCB), an independent and quasi-judicial body created by R. A. 10368 to receive, evaluate, process and investigate reparation applications of Human Rights Violations Victims, as defined by R. A. 10368. "

While there have been different experiences with the regions during Martial Law, and there is this notion that "only Manila, the Cordilleras, Mindanao, and the hinterlands" get the attention of these atrocities," the HRVVMC has gathered data and took note of the place of incidents--and this includes provinces in northern Luzon that were said to be a bailiwick of former President Ferdinand Marcos.

In these maps, "10 Points" or forced disappearances or killings based on the data provided has shown that even Northern Luzon was not spared with these atrocities, thus questioning the notion of a “one united solid North” narrative.

The map shows that most of the “10 points” human rights abuses occurred in Cagayan Province, with 76 confirmed individuals either missing or killed, followed by Isabela by 50. Ilocos Norte had 22 victims, not yet counting various degrees of abuses like involuntary exile or tortures. There were zero cases like La Union and Batanes, however the HRVVMC’s roll of victims is progressively updated from time to time.

Map created with fellow colleague Reidan Pawilen of UPLB Department of Social Sciences. The maps are written in Filipino and Ilocano.