Pasyong Pilipino and The Met: The First Theatrical Performance We’ve Watched Since the Pandemic Began 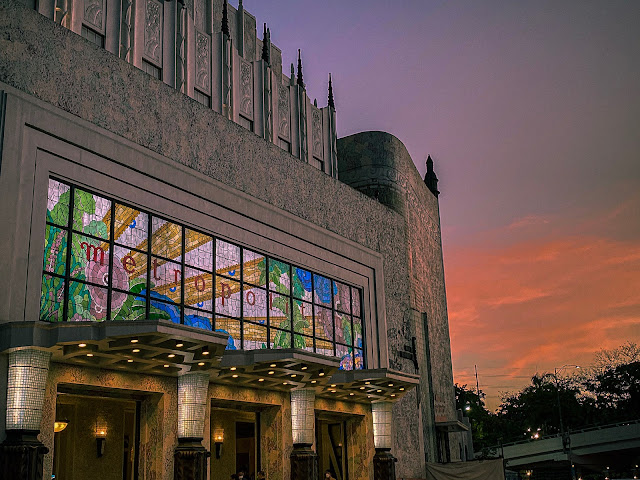 When the world stopped and locked down two years ago due to Covid-19 Pandemic, social gatherings were halted or limited. We were worlds apart. We must contend ourselves with webinars, online concerts, and conferences that were tiring and lacking that spirit of enthusiasm of social interaction. There was even this meme that we created that became viral and was noticed by Philippines’ bossa nova star Sitti that was an ode to conference lunches that we had back in pre-pandemic days. There was this longing of interacting and watching “in place.” Fast forward, we just went with Omicron wave and now that the Covid-19 cases are down, the authorities have lowered the Alert Level to 1—the lowest in two years. Finally, we can watch on theaters—from movies to performing arts—with people to enjoy with. Then my former office posted that there’s a free show at the newly-renovatedMetropolitan Theater on 25 March 2022. We could not miss this opportunity. So, we booked and confirmed for the show for that Friday night.

Years ago, when I was still working with the National Commission for Culture and the Arts (NCCA po, hindi NCAA), we witnessed the acquisition, the initial cleanups, and the processes of renovation of the historic Metropolitan Theater in Lawton, Manila. Spanning from 2015, it took a long time for this Juan Arellano-designed building to be brought back to life after years of neglect.

Built and inaugurated during the early 1930s, it became home for theatrical and performing arts at that time such as zarzuelas. Visitacion de la Torre (1981) mentioned that in 1924, the Philippine Legislature proposed to have a theater in Manila and was only realized in 1930 that was to be built in in the vicinity of Mehan Gardens.

Architect Gerard Lico (2008) stated that Arellano used Filipino motifs in Met’s Art Deco design, incorporating tropical flora and fauna such as those in the ceilings are adorned with mangoes and bananas, along with other designs such as Capiz lamps. Art Deco in the 1930s is a fad in architectural design when it was built.

It was damaged during the Battle for Manila in 1945 and was repurposed as a boxing arena or home for informal settlers. Norma Alarcon (2008) mentioned that in 1978, the theater was rehabilitated by former First Lady Imelda Marcos. It added some rooms and spaces to which were noticed during the rehabilitation efforts recently. It was notable as the venue for the grand finale of Sharon Cuneta and Cherie Gil as Dorina Pineda and Lavinia Arguelles respectively in the movie “Bituing Walang Ningning” in 1985.

Though it was declared as Pambansang Palatandaang Pangkasaysayan (National Historical Landmark) in 1976 and Pambansang Yamang Pangkalinangan (National Cultural Treasure) in 2010, it fell into decay and was left abandoned for some time.

From 2015 on, NCCA acquired the theater and was rehabilitated to become a theater of performing arts and housing some of its front-line departments and offices.

Pasyon is a practice of the Filipino Catholics during Lenten Season. It dramatizes through songs, chants, and plays the Passion of Jesus Christ—from the last supper, the agony, the betrayal, the suffering, the death, towards His resurrection. It has many versions and attributed practices all throughout the country. To some, they call it senakulo, to others Pasyon.

In the brochure provided by The Metropolitan Theater (2022), the traditional framework of Pasyon was from Pasyong Mahal or Mahal na Pasion ni Jesuchristong Panginoon Natin na Tola that was published by Gaspar Aquino de Belen in 1704. Though derived and translated from Spanish poetry, it was infused with the way Filipinos sing, or as historian Reynaldo Ileto said, as tagulalay in which a verse is sang in sorrowful, melancholic tune. In some theatric renditions, the characters wear periodized Middle Eastern and Roman attire, albeit from drab to flamboyantly colorful. Some are done donning hand-crafted Masks such as those done in Marinduque for the Morionan / Moriones. To those who go to provinces and even in corners of big cities, the tradition of Pabasa (readings) are carried on as telling the story of the Passion through reading and singing.

Pasyong Pilipino is a modern rendition of this Filipino intangible cultural heritage. Taking aspects from the original texts, National Artist Bienvenido Lumbera made it more contemporary and understood by modern audiences. Rolando Tinio, National Artist, made it for modern television audiences. Finally, Jesuit Priest Eduardo Hontiveros composed the music in this said play—merging the traditional and familiar tones of the Pabasa or Pasyon with other influences. The play done in Met last Friday also incorporated works of art from National Artist Carlos “Botong” Francisco.

The First Public Performance of the Year for the Met

While browsing my timeline on Facebook, NCCA posted an upcoming theatrical play called “Pasyong Pilipino” to be shown on 25 March 2022—a Friday night! Sakto! While this is not the first event that happened in the newly-rehabilitated Tanghalang Metropolitan, it was the first public performance for this year—when the Alert Level for the Community Quarantine has been dropped to Level 1. Finally, theaters and cinema houses are open for viewing. Social gathering is now allowed (albeit “limited” with minimum health standards). That Friday night, my heart was gleeful seeing people once again coming together to watch the play and musical.

It started at 7PM and finished around 10PM. What caught my attention, aside from the play and the newly-renovated Tanghalang Metropolitan was that people from different walks of life were finally watching inside a theater—two years after we were torn apart by the Pandemic. Like what we have mentioned earlier, the spirit or diwa of communal gathering was heartwarming and celebratory. While minimum health standards were still observed, the thought and act that we gather ourselves once more to watch a theatric play that pays tribute to our tradition, and timely for our Lenten Season, brought a feeling of relief and warmth.

We are looking forward for more public screenings at the Met.

For more info and latest updates from The Metropolitan Theater, you may like their Official Facebook Page at https://www.facebook.com/METphOfficial

Lico, G. (2008). Arkitekturang Filipino: A History of Architecture and Urbanism in the Philippines. Quezon City: The University of the Philippines Press.