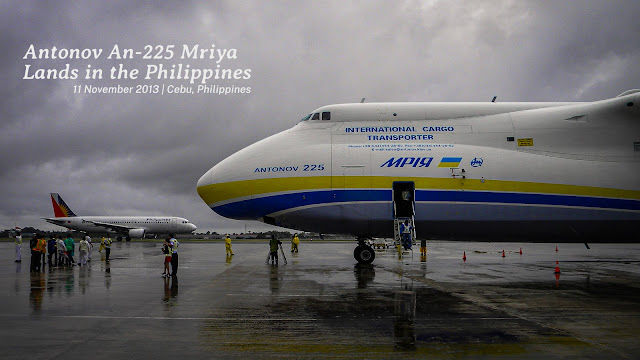 It was a rainy November day in Cebu. For several days, Mactan-Cebu International Airport was teeming with activity due to humanitarian relief efforts coming from different parts of the globe as a response to Typhoon Yolanda (Haiyan). It was the closest big airport from the disaster zone. However, there was also a special visitor coming in from Zagreb—and this is one “rare bird” for the plane spotters. Antonov An-225 “Mriya” was coming to the Philippines for the first and only time.

Antonov An-225 Mriya was the largest aircraft by weight according to Guinness World Records. It has a maximum take-off weight of 640 tons. (Guinness World Records, 2022). The Ukrainian made aircraft took its maiden flight on 21 December 1988 near Kyiv and was initially made to be the carrier of the Buran Space Shuttle and Energiya rocket components of the former Soviet Union. Its wings span 88 meters, and the length of the aircraft’s body (fuselage) was 84 meters—enough to cover three full basketball courts. Its nickname was “Mriya” which meant “Dream” in Ukrainian. (Antonov, 2022).

As mentioned earlier, it was a rare bird. Only two were built, one was operational, and the other was partially built. The collapse of the Soviet Union in early 1990s has left the only operating An-225 in mothballed for years, while the partially-built one was inside the storage at the outskirts of Kyiv. (Fedykovych, 2018). The former was able to fly again and back in business after a major overhaul on 7 May 2001. (Antonov, 2022)

Why was Mriya coming to the Philippines? A lot speculated that it was one of the aircraft carrying humanitarian assistance to the country which, at that time, was badly damaged by the wrath of Typhoon Yolanda (Haiyan). Cebu was an aviation hub of relief operations since it was closer to the affected areas in the Visayas, and there were a lot of military and commercial aircraft landing and taking-off for weeks. However, Mriya’s service was albeit different. In an article of Cebu Daily News:

“AN225, which is capable of carrying up to 250 tons, delivered a replacement transformer from Croatia for the Lopez-controlled FGP Corp., a subsidiary of First Gen Corp., for its San Lorenzo natural gas-fired power plant in Batangas City.” (Taberna, 2013)

According to Nigel Paul Villarete, then General Manager of the Mactan-Cebu International Airport Authority, he had second thoughts of having the behemoth landing in the airport due to safety issues. However, negotiations and assurances were made for it to safely land in the country’s second busiest airport.

Why Cebu? Manila’s NAIA or Clark was much closer to Batangas? Estela de la Paz, Assistant Vice President of the First Gas Pipeline Corporation, said that land transport from the airports in Luzon were more expensive and there are no bridges that were made to carry 150 tons of cargo. (Taberna, 2013)

It was coming from Zagreb in Croatia, carrying the said cargo. However, it too brought crowds of aviation enthusiasts in the airport. It brought media attention so much that it must control the people coming in to see it. (UTC Overseas, 2015)

We were only informed of its arrival a few days before. I was once based in Cebu at that time and fortunately, Mr. Villarete invited us to witness the first—and now the only time—the Antonov An-225 landed in the Philippines.

When we went to the airport’s view deck, the authorities were busy with the preparation for its landing. It was rainy and the visibility was poor. The staff were anticipating its arrival. After all, it was the only Philippine airport where the world’s largest aircraft will land.

On 11 November 2013, around 8:55AM Philippine Standard Time, the colossus landed. Who would have thought that such large aircraft, amid the challenges of weather and its precious cargo that it is carrying, landed smoothly in Mactan?

It taxied towards the tarmac of what is now the ramp of Mactan-Cebu Airport’s Terminal 2. It dwarfed even the Belgian Air Force’s Airbus A330—a wide-bodied aircraft!

We were excited. We went to the parking area and was caught in awe with its size. Six engines, multiple wheels, two rudder tailfins. For some it looks like an abomination, but for us it was an engineering marvel of humanity.

The doors opened and Captain Demetri Antonov went down. The staff was welcomed warmly on that rainy day. After a few minutes of media interviews, we were able to get inside the largest aircraft in the world!

The cargo was huge! However, what caught our attention was the cockpit and the sleeping quarters of the crew. Written in Cyrillic and Ukrainian, these knobs and dials felt like we were transported to the age of aviation Cold War, where Western aircraft was pitted with Soviet-made aircraft. It has its own unique experience. This is not your usual digital fly-by-wire cockpit that we have today. Dials were still on manual hands. It was using a yoke, rather than a joystick (which I think is more of a feature of Western European developed Airbus), and still needs flight engineers.

We deplaned thirty minutes later to allow the aircraft staff and ground crew to resume alighting of the cargo. The aircraft’s nose opened for the cargo to be unloaded at the airport. Mr. Villarete, Captain Antonvo, and I went to the VIP Terminal and had more time to talk about the aircraft. As noon was fast approaching, I bade the captain and Mr. Villarete goodbye and thanks. I still had work that afternoon. I went to the office carrying precious memories of its landing in the Philippines.

The invasion of Russia to Ukraine kept us on our seats, especially for the plane spotting and aviation enthusiastic community. Whatever happened to Antonov An-225 Mriya? News of the capture of Chernobyl and outskirts of Kyiv were disheartening. The Ukrainians fought valiantly in protecting their capital and their country from the invasion. Yet no news from Hostomel until on 27 February 2022 Airport (Gamillo, 2022), the worst news came from Antonov Company’s official Twitter:

The biggest plane in the world "Mriya" (The Dream) was destroyed by Russian occupants on an airfield near Kyiv. We will rebuild the plane. We will fulfill our dream of a strong, free, and democratic Ukraine. pic.twitter.com/Gy6DN8E1VR


The aviation community mourned its loss. It was 33 years old.

We were fortunate enough that this colossus was able to land in our islands—unexpectedly. We are looking forward for the resumption of peace in Ukraine and this aircraft be rebuilt as promised. For this, privit i dyakuzhu, Mriya. Hello and thank you, Mriya!