Cabanatuan Cathedral: A Seat of Faith and a Site of Historical Controversy 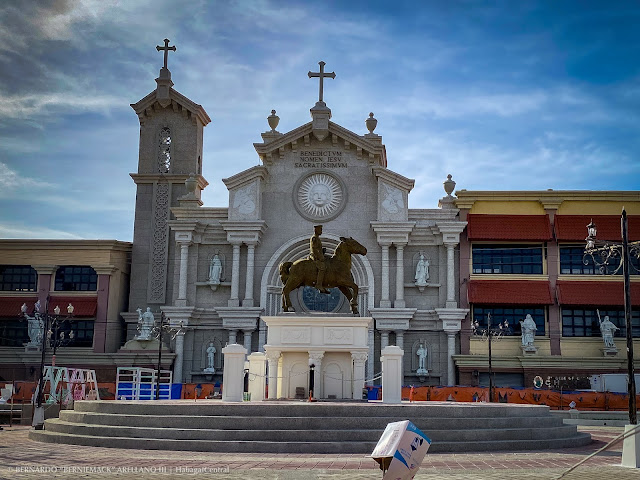 The cathedral lies on the southern quadrant of Cabanatuan's plaza complex, Plaza Lucero.

It was a visita of Gapán until 1700. Galende (1996, p173) mentioned that the first stone church was built in 1866 but was later destroyed by a tremor in 1880. It was later rebuilt by Fray Mariano Rivas OSA and said to have three naves (Jorde, p612). However, it was later gutted by fire along with the convent.

Though there is a new cathedral being built outside the downtown area for some time now, it is still unoccupied and unfinished. In the meantime, the latest renovation of the original was only done recently starting 2019. (A footnote: personally, I felt mortified with the pre-renovation facade of the Cathedral. It was flat and devoid of design.)

On the other hand, not only it is significant religiously and socially, but also historically as well. Aside from being established in 18th century as an independent parish and core of the town, it was also the site where the Philippine Revolution hero General Antonio Luna was assassinated on 3 June 1899 along with his aide Coronel Francisco Román of Cagayan, by members of the Kawit Battalion (General Emilio Aguinaldo’s Presidential Guards as mentioned in the NHC 1966 marker at the Cathedral). Vicencio José (1972) in his book detailed the last minutes leading to the assassination of Luna and Román in Cabanatuan’s Church and its neighboring Plaza Lucero. Noted public historian Michael Charleston "Xiao" Chua (2013) mentioned in his blog Xiao Time that “Aguinaldo denied his complicity in the assassination. However, his fault was he was not able to prosecute those who were involved.”

As of February 20, 2022, Plaza Lucero and Antonio Luna’s monument is still under renovation.