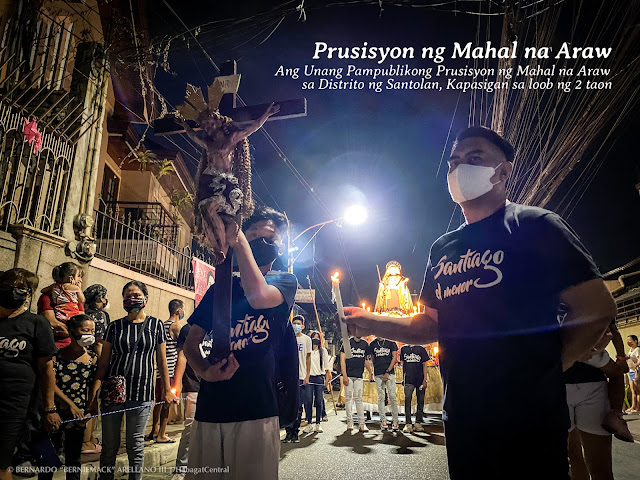 It has been two years since the start of Covid-19 Pandemic that halted the Holy Week activities of the Catholic Filipinos. On the first year, it was the beginning of the hard lockdowns. On the second year, it was because of the Alpha and Beta variant surges of that salot. However, this year, it came back to life with such fervor from the residents of Santolan District in Pasig City, part of Metropolitan Manila, as the annual tradition is back.

The Lenten Procession of Holy images in the Philippines dates back from the Spanish colonial times. The conversion of the native population has adopted some customs from the Catholic faith prevailing in Europe yet managed to add up some aspects of indigenous and other cultures that makes the practice more “Filipino.”

It is during these processions where images of saints, the apostles, and the Passion of Jesus Christ are shown to the community through a lengthy procession which is mix of solemn prayers, reunions, socializing, and pageantry. The images are adorned with flowers, scented with perfumes, illuminated by lights, and sometimes having some “special effects” while the carriers and the community follows with their candles murmuring prayers.

What is special about this year’s Lenten Procession is that for the first time in two years, people can gather like what they used to during before the Pandemic hit. Saintly images and stations align the streets. People mingle and socialize with each other. As if life has come back since that salot. The remnants of the pandemic can be seen with people still wearing masks (or loosely), but social distancing is something from the distant past. People were delighted seeing this annual tradition once again—neither a motorcade, nor an online procession (which sucks just like webinars cannot replace the in-person seminars/conferences).

We were able to observe the Lenten Procession, or Prusisyon sa Mahal na Araw, at Santolan District in Pasig City. Located along the eastern banks of Marikina River, it is one of Pasig’s old and historic settlements. It is the center of the Parish and Vicariate of Santo Tomas de Villanueva. Accounts of the communities vary from being established as a visita dedicated to an Augustinian saint. Another literature mentions that it was established by two siblings, Don Luis, and Antonio Victorino in the late 1700s. In the 1885 map Provincia de Manila by Enrique d’ Almonte y Manuel, Santolan was the community where machines for the water supply of Manila was close by. Its main street, Evangelista, was once the old carreta to Mariquina, San Mateo, and Montalban from Pasig. It was also the temporary refuge of Nuestra Señora de la Paz y Buen Viaje, or Mahal na Birhen ng Antipolo, during World War II. (Antipolo Cathedral n.d.)

Now that the Pandemic is somehow waning, we were able to witness our first Lenten Procession in two years. We were very much surprised by the number of images in this community—around 45, mostly owned by some old families. People lined up the streets that Holy Wednesday night to witness the procession—without inhibitions (except the face masks) nor the lame quickness of a motorcade. Despite the noise of the surrounding areas, it was a solemn one